I was surprised at how sad I was on hearing of Gough’s death. As though someone I knew personally had died. I only knew him from afar. As Prime Minister breathing life into our national system of government and moribund institutions. The American poet Mayo Angelou said “People will forget what you said, people will forget what you did, but people will never forget how you made them feel”. He made me feel proud to be Australian for the first time and made me optimistic about the future. And in his case we do remember what he said and what he did as well. In part because of the books. Despite all the words written lately no-one has described his Government – warts and all – better than the man himself. I have all the books.

His best one is of course the big one. I bought it on 11 November 1985 – exactly ten years after the dismissal. It is a wonderful, erudite, witty exposition of the whole three years. And covers everything, in detail. History is usually written by the victors, but Gough took control over his legacy through his most potent weapon – words. There is a wonderful description here of the first days – notes taken at the first meeting with the Departmental Secretaries – decisions taken to change Australia’s votes at the UN (Rhodesia and an Indian Ocean Peace Zone), ending conscription and releasing draft resisters (Mr Harders advised a cautious set of words). The whole setting up of the duumvirate or as Gough notes truly a triumvirate as the Governor General was included. What consternation among the officials there must have been to discover that Whitlam intended forming Government the next day rather than have McMahon carry on in a caretaker role until the full swearing in. It’s a wonderful read. 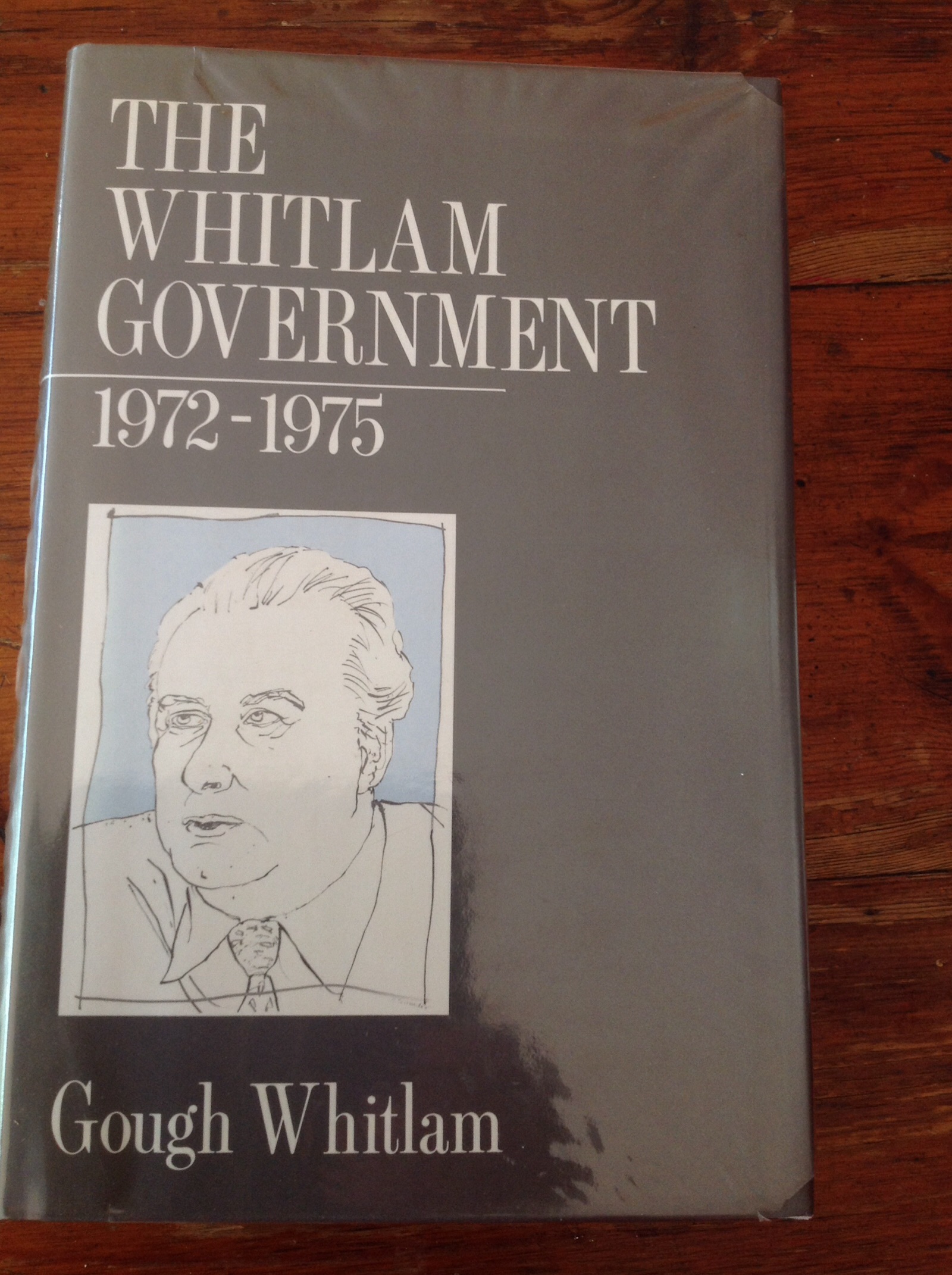 I’d also seen Gough on the campaign trail. Up closest in the 1974 election. And most notably during that at a grand rally at at a packed Festival Hall. We, the small in number but high in energy Melbourne Uni ALP club, marched there holding candles representing Chifley’s Light on the Hill. A light that Gough was now defending, (our charismatic President, Jeremy Harper’s idea – the ‘Light on the Hill’ has become a bit over-used, but it wasn’t then.) It was hard to keep those flames alive on a wet and windy night as we walked from Carlton to North Melbourne. Gough was a great campaigner and his speech that night was one of his best – clear and righteous, inspiring us all to fight harder for the great cause. He and Margaret were treated like rock stars leaving the hall – people running to clasp a hand, touch their car, catch a glimpse.

It’s been forgotten or subsumed really that they won that election despite the hysterical campaign being waged against them – before, during and after the election. It’s hard to impart to young people the mood of the times. No Labor Government since has attracted the same virulent and sustained attacks. In the press, in the Parliament and in the courts. I was studying constitutional law – what a wonderful time to be doing that. Another day – another constitutional challenge. We pored over the judgements – often conflicting – as the constitution was tested again and again. And as the lawyers argued the people wondered whether what the Government was doing was legitimate. After all no other government had sought to do all these things.

So whilst it was a shock, it wasn’t completely surprising that Gough’s next role on the public stage was as the victim of Australia’s first, and one hopes only, coup. Somehow though he never seemed a victim. Looking back it seems only fitting that Gough was removed from office in such a dramatic way. Losing at a regular election would have been too prosaic for such a man, for such an exciting government. I only think so now. At the time I was devastated. On the 11th of November 1975 I came out of my Family Law exam to see Sandy Thomas holding up what I thought must have been a dummy Farrago (the University paper of which Sandy was editor). He saw my disbelief and said It’s true, he’s been sacked! Go to the City Square! I had a family function in the country so couldn’t do as he said. I hoped my housemates were there but they were in a movie and didn’t hear the shocking news until late in the night. There were demonstrations thereafter. Big ones too. But we knew – or is this hindsight – that the Government was doomed. I cast my vote at Australia House in London. Presumably for Ted Innes in Melbourne but I have no recollection of that (or of voting in the 1974 election). We saw a grainy Gough conceding defeat in a small news item on the BBC.

When I came back though the ALP club took to heart Gough’s words immediately after his sacking, “Well may God Save The Queen, because nothing will save the Governor-General”. We hounded the Governor General and we did it in earnest. And we succeeded, I think, in hounding him from office. The first big demonstration was at Larundel- a function centre in Kew. I remember huge arc lights, presumably set up by the police, and a lot of waiting. It was very big. When word came the GG was there we surged forward. The other big one was in Queens Road. I don’t recall the exact venue. It was raining. Lots of people. When the white car appeared we threw ourselves at it – him sitting stoically in the back. Sack Kerr, Sack Kerr was the chant. After he’d appeared inebriated at the Melbourne Cup in his top hat, shown (minus top hat) here thanks to Malcolm Farnsworth. Tandberg was wonderful – thereafter always depicting Kerr in his silly hat, drunk. And so we wore the silly things as well. (I wonder whether Tony will try and get his new Knights to wear them?) Here my friend Kate and I test the hat before venturing out on another anti Kerr demo.

Later, not long before he died, I saw him close by when I was visiting the National Gallery in Canberra. He seemed to be being led by his wife, shuffling along. The chant Sack Kerr almost sprang out of my mouth – so instinctive was it. But I desisted. He looked forlorn and I was (and still am) glad. I hope our efforts give any future Governors- General pause before they follow his example.

We vented our spleen on Kerr more than Fraser for a couple of reasons. First because Gough had told us to. Secondly because Fraser was just doing what a politician does – making the most of the opportunities that came his way. And there were lots! Many say he should have waited and he would have had a better Prime Ministership. I’m not sure. He seemed to be getting on with a conservative agenda pretty well from where we sat. Slashing and burning. We did demonstrate against him. The most famous being the big one at Monash where he got locked in the toilet. But increasingly demonstrations against him became more focussed on his Government’s actions. With Kerr we just had one focus – the dismissal. At the time we did not recognise Fraser as a progressive on discrimination and refugees. And as Alan Ramsey has reminded us recently Gough had moved on in his relationship with Fraser. So it’s been harder to maintain the rage against him. Years later on the morning of the 11th of November sometime into his Premiership I was at a meeting between Steve Bracks and Fraser – at the latter’s request as he was lobbying for support for a national Bill of Rights. Sitting in the Premier’s Office in Parliament House it was a far cry from Steve’s annual demonstrations on this day protesting the dismissal in Ballarat (with my old mentor Jeremy Harper). On one memorable occasion they hauled a coffin along Sturt Street representing the death of democracy. A moment to savour life’s ironies.

In more recent times I saw Gough, often, as a Yeatsian public, smiling man at countless ALP functions. His longevity made this his longest running part in public life. He was there at all the big occasions – centenaries and the like. In the early days always spruiking the achievements of his Government. He had plenty of material. Here’s a (very incomplete) list I put together for an ACTU Congress years ago. On the video it seemed to go on forever. What’s remarkable is that these initiatives just kept coming despite the hostile forces raging around the Government. Medibank was one of the last to be delivered just weeks before the sacking. But even in these more recent speeches Gough was presenting new reform ideas. He wanted all elections held on the same day and continued to press for Commonwealth powers – another thing that Tony Abbot is seeking to curtail. 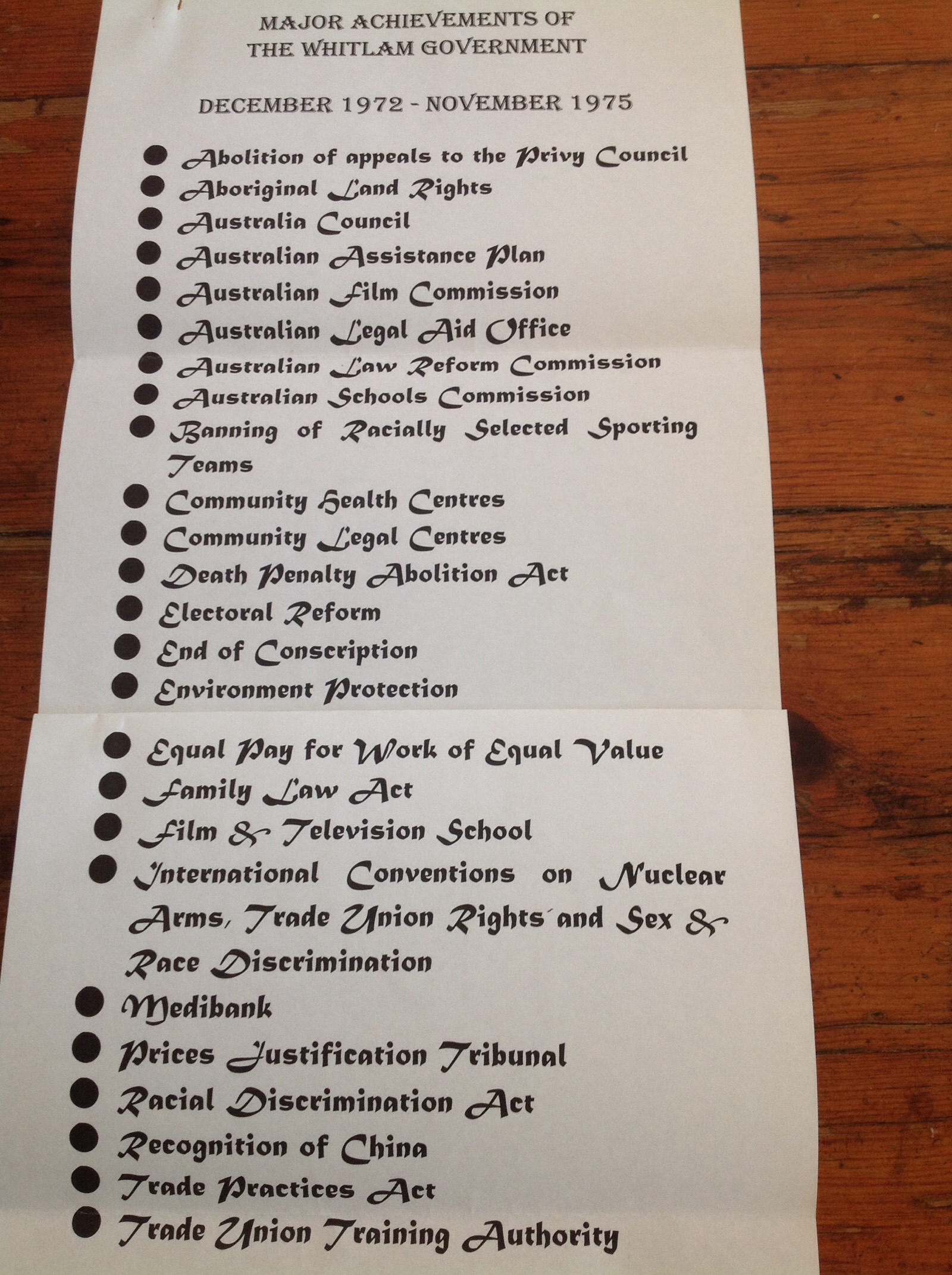 Now we move onto the next phase of Gough’s history. I couldn’t bear to read many of the eulogies or obituaries printed in the papers. Some little vignettes were nice from those close to him. What’s been completely absent from the written material as far as I can see, is the hostility and downright hysterical response to the Whitlam Government. (Though glimpses snuck through – Christopher Pyne’s mother weeping for joy on hearing Gough was sacked.) Right from the start their legitimacy was questioned along with their capacity to govern. It wasn’t so much a contest of ideas – as the eulogies and time attest, the ideas were all good – but their very right to be there at all. Given all the recent praise young people might be forgiven for wondering why on earth Gough was sacked. Cant and hypocrisy abounds.

Most of what was said was actually about those doing the writing. I saw a headline In mourning Gough we mourn ourselves which I think sums it up. I like the line from my former colleague (and great poet) Joel Deane’s poem Requiem that he’s reading at Federation Square as part of the service for Gough; the dead are beyond our vanities. Unfortunately for Gough I think this part (the projection) is just starting and to paraphrase Auden’s in Memory of W B Yeats he is about to become his admirers, /Now he is scattered among a hundred cities / And wholly given over to unfamiliar affections. Isn’t that true when you contemplate those who publicly mourned him have said – the remnants of all those baying hounds who denied him legitimacy and have spent years trying, and still try, to undo his work. None more so than Tony Abbott whose reintroduction of Knights and Dames is emblematic of everything Gough opposed – Australian independence and modernity. But to paraphrase another poet we come to bury Gough not rake over old wounds. So I leave this with another paraphrase from Auden’s great poem: Earth receive an honoured guest, / Gough Whitlam is laid to rest.