In October this year I took a road trip along the silo art trail in the Wimmera, Southern Mallee. I went with my brother and sister and her husband. It was a nostalgic trip as we travelled through country towns familiar to us from our childhood; mostly their football grounds when Woomelang/Lascelles played away from home in Southern Mallee Football League games; a league and teams long since merged with towns from farther and farther afield. We started off with driver and navigator considering our route in Stawell, with an old fashioned paper map. 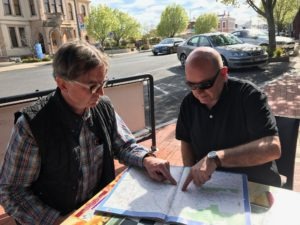 First stop; Rupanyup. This is further South than those places we got to more frequently as kids. I liked the silo very much; strikes me the Russian artist has captured the essence of the types of kids who live in these country towns where sport is such a central part of their lives. 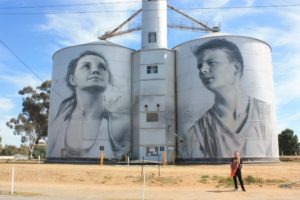 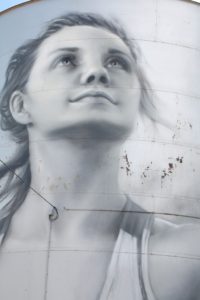 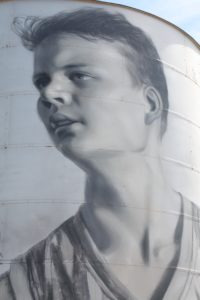 We liked the old railway station. 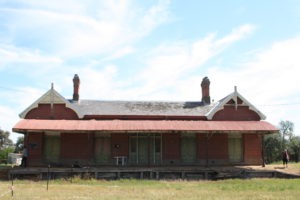 We picked up a pamphlet showing our silo art trail. 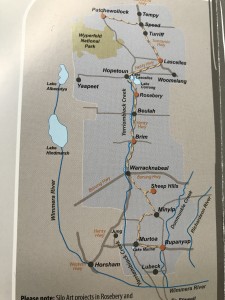 We’d planned to stop by Murtoa, where I’d often travelled on a round about rail trip from school to home via a little old red rattler from Murtoa to Hopetoun. We wanted to see the famous Stick Shed but it wasn’t open. Here is what we missed. We’ll save it for another time.

On then to Sheep Hills. Truly the middle of nowhere; between Minyip and Warracknabeal. Great silo art. 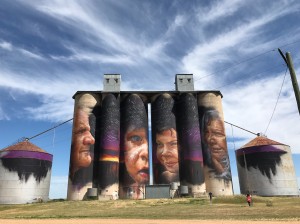 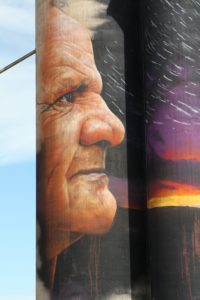 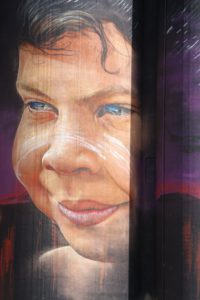 This picture gives a flavour of where we were. 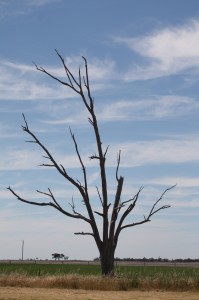 And this one, ie. in the middle of nowhere. 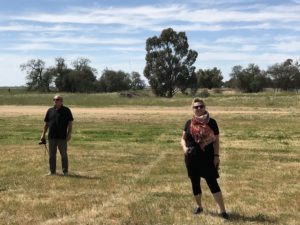 This the only other building thereabouts, the old Commercial Pub, beautiful. I wonder how many commercial travellers stayed here over the years. Looks like it has been done up to be a very comfortable family home now.

We sped through Warracknabeal, a mistake as we should have stopped there for lunch, on our way to Brim. A memory from many shopping trips with my mother to Warrack; my very first ball dress! On to Brim; very familiar territory from football matches long ago, car drawn up to the fence, the ritual walk around the oval at half time. This was the first of the silos to be painted and there is an informative poster explaining the history – the only such information to be had on the trail apart from small pamphlets about each of the towns, that were also available at Brim but not universally elsewhere. 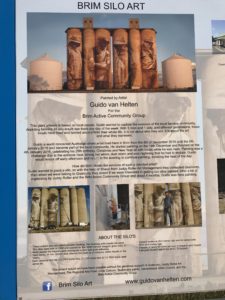 We all liked this silo the best, in terms of the art. 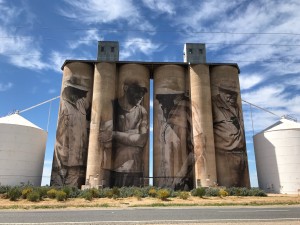 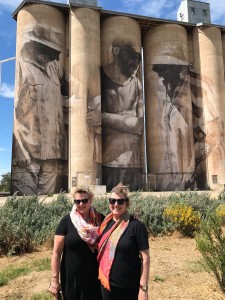 To Beulah, where as a boy my brother spent time being treated for a broken leg in their famous round, actually hexagonal, hospital. No stopping as we were on a mission. The next silo is at Rosebery, another familiar name for us, we’ve been down this road many times before, but a long time ago. This is work in progress, the latest silo to be painted, and the first to feature anything other than a person. A horse is emerging. We wondered whether work was stopped due to the wind. In any event there’s no fear of theft around these parts. 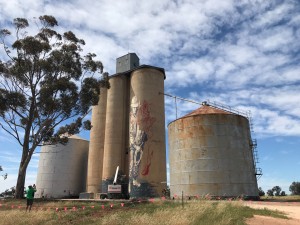 On we went, through Hopetoun; memories of learning to swim on hot concrete at the pool, religious instruction at the convent leading up to confirmation by the old Bishop (not Mulkearns), hanging around in our cousins back yard under the old single washing line. No silo here, but a lot of Indigenous history according to my brother. Not something we heard about in our youth. On we went through the mallee landscape; flat country, green wheat fields, big skies. 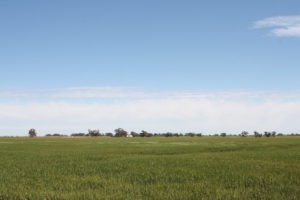 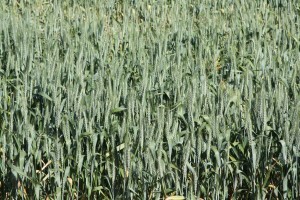 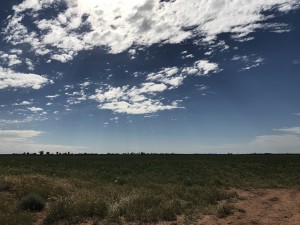 And then we were in Lascelles, the other half of the Combine footy team of which my father was President. We didn’t come here that often, being much more familiar with Woomelang. But this is close to home territory. And the last silo for us. 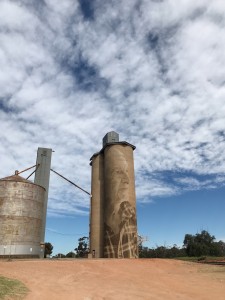 Some of the locals, we discovered later, are underwhelmed by the subtlety of these images but I thought they were beautiful. Its the expressions on the faces that make them memorable. These are the people of my youth. The picture of the woman was harder to capture against the light from the sun. 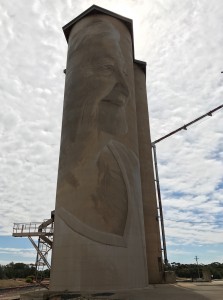 Whilst the end for us, it’s not the end of the Victorian silo trail. The final silo is in Patchwollock but this was just that bit too far for our one day road trip. I thoroughly recommend the trail for an enjoyable day or two. It’s worth seeing. During our day visiting them we say around six other groups doing the same. One day I’d like to go to Patche to finalise the experience. 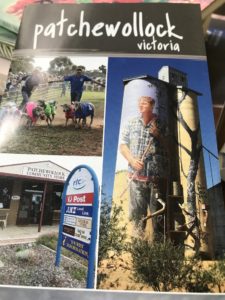 At Lascelles we were able to get a coffee at the pub across the road from the silo and peruse past and present footy teams which continue to include Doran cousins. Then we continued on our way. Here I am on the road to Watchupga 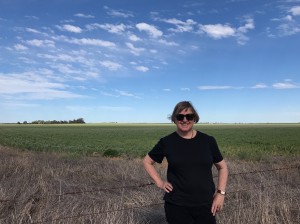 What we found there is the subject of a separate blog.