In October, after visiting Victoria’s art silos, my brother and sister and I visited the place where we grew up. What would you call it? Not a town, not even a village. But worthy of a name on maps and roads, a post code (3477), a school (number 3380) (where my mother arrived to teach in the late 1940’s), a public hall and tennis courts, a catholic church, a general store and fuel agency (run by my father and his brother) a railway station, and a silo and oat shed. Three families lived there in my day; two houses of Dorans, my Grandmother and Uncle in one, us in the other; first one, but eventually two houses for the Baileys, and two Adcock households. There was also a series of railway families; eagerly sought after because they kept numbers up at the school, giving us the 12 pupils needed to keep open.

Watchupga was the centre of a thriving farming community when we lived there. Weekly mass brought all the catholic families together. Twice weekly mail runs took us around to all the farms in the district. We had regular trips to Woomelang in the North and Birchip in the South to collect bread, mail and other goods for distribution through the store. Trains came through regularly dropping off more goods from both Melbourne and Mildura. Travelling salesmen (always men) dropped in: a draper from the South in a big red van, a green grocer from the North in a green truck. There was a telephone exchange in the store linking all the farms to the outside world, and each other through party lines which required personalised rings for the different customers; three short rings, a short, long, short ring etc.

My family left for good in 1972. That was after my brother and I had completed our secondary schooling in boarding schools in Ballarat. We had basically stopped living there when we were 12. The mallee’s heyday was well over by then. Wheat quotas had seen an end to the golden harvests of the past. The world was shrinking with bigger regional centres growing at the expense of the little businesses that had sustained the smaller towns around them. A foretaste of those regional towns being squeezed out by the bigger regional cities. People were prepared to drive longer to do their shopping. Farms were consolidating meaning fewer families on the land. Young people were leaving. Schools were closed, railway stations closed. Even silos were closed up to be turned into artworks.

So what remains forty years later?

The Watchupga silo is still a landmark on the horizon, as it always was. We used to compete to see who could see this first coming home from Woomelang. 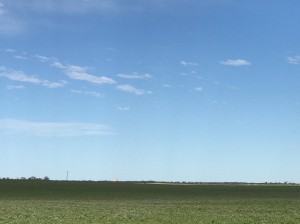 And the road signs are still there. This one is on the road going directly to the main street. There is another on Sunraysia Way which is over towards the right. We look like real city slickers. 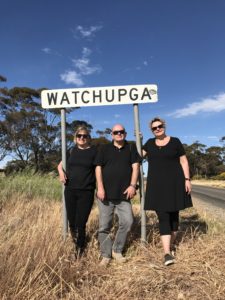 But the mile-post is gone. It was exactly one mile from the main street before you got to this sign. We used to ride our bikes down to it pretty regularly. Turning left at the mile post took you to Burchill’s farm. We didn’t go the whole way very often, but we’d meet the Burchill kids on the road somewhere in between and muck about. There was an overgrown council flat along that road as well. We didn’t go rabbiting very much, nor bird nesting. We weren’t the huntin’ shootin’ types. Neither was our father, although I did see him shoot a feral cat once. No mucking about – bulls-eye

The catholic church is still in place. This modern building was built by our parents (imagine at what cost!) after the old church, a handsome wooden building (as depicted in photos) was blown over in a storm. Before our time. Many hours spent in here – not very productively I must say. It’s been purchased and is being done up as a holiday home. In Watchupga! Amazing. 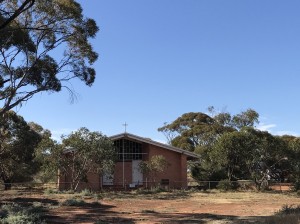 The public hall is looking the worse for wear. This was another a replacement building after the original hall was destroyed. Perhaps in was the same storm as the one that blew over the church. I’ve also only seen the original hall in pictures but it complemented the wooden church. It was much bigger than this one, and they used to have really big dances there. I only remember a couple of dances in this one. The tennis courts are behind it, and in much the same state of disrepair. 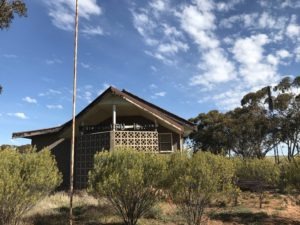 And beside the hall the school remains, looking sadder and sadder. It was a spick and span white place with red trim when I was here. My father went to this school and my mother taught here. It was the voting place during elections with Mum the chief returning officer. Not that I was interested in elections then. Now it reminds me of the John O’Brien poem ‘Tis a queer old battered landmark that belongs to other years / With the dog-leg fence around it, and its hat about its ears; / And the cow bell in the gum tree, and the bucket on the stool, /There’s a motley host of memories around the old bush school. 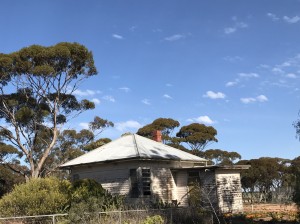 The house my father built for his new bride some time around 1952 is still standing. We were one of the first people in the district to get a television and my father put up that big aerial. I can’t remember what sort of reception we got. We were only allowed to watch the ABC! 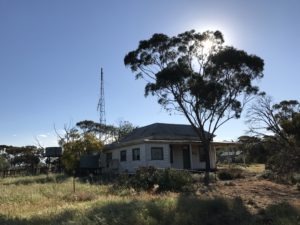 Its foundations are remarkably sound. My mother planted two rows of standard roses alongside a path leading from the front gate to the front door. No-one ever used it. I remember only one occasion; a policeman coming to tell us that Dad had been in a car accident. He, and my brother who was in the car, were both okay. We had two square patches of lawn out the front and also at the back. It was scratchy buffalo grass and I hated it. 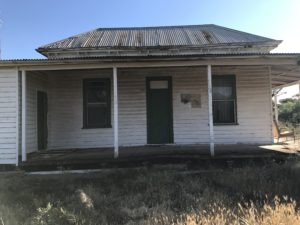 We spent a lot of time on this wide verandah. My mother used to oil it. Which meant we couldn’t sit on it for a while after it had been done. It’s clearly missing the oil! We had a swinging couch that we sat on. From the side here we could see our Uncle’s house, no longer standing, and the store, also no longer standing. 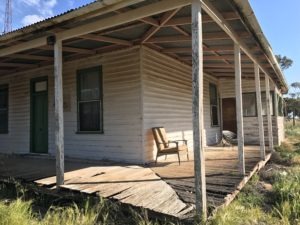 This is the other side of the house that we usually saw from the other end, where the toilet was, door always open, no need for privacy here. My mother worked so hard to have a beautiful garden along this side of the house. There was a beautiful peach coloured Peace rose that grew along the fence that made it look quite lush. I don’t know how she did it given our lack of water. Watchupga used to get about 12 inches of water a year. The fence, now gone, separated the house garden from the orchard which was Dad’s domain. He worked hard to keep his fruit trees alive. Mostly I remember lots of nectarines. All gone. 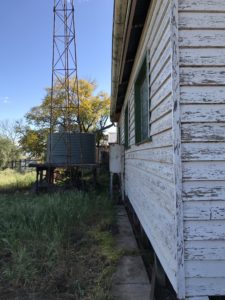 And here is out the back. You can see the wash house on the left. Where we did the laundry, originally in the old copper then the round washing machine with rollers to squeeze out the water. Where we plucked chooks. Cleaned shoes. Beyond there was an old drum where we burned our rubbish. When we were children the occasional swaggy would turn up and be allowed to sleep in the wash house. There was a back lawn and garden, including two pencil pines, one always taller than the other, on either side of the back gate that led to the wood heap and beyond. 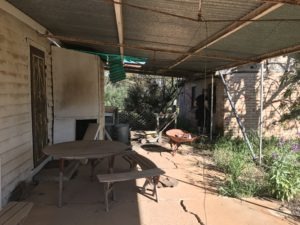 And this is a Silky Oak that Mum planted close to the wash house wall. Dad always said it was too big and I suspect he was right. But there is no-one to care any more. 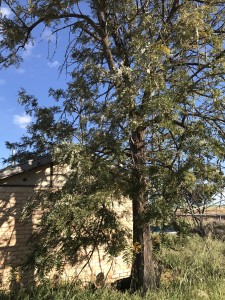 Inside is full of furniture and junk belonging to the person who brought it from us. All being left to rot. Too sad for pictures. But here is another happier view. We played a lot around the silo and in the scrub alongside the railway line. We also eventually worked on the weighbridge and at the silo. There was good money to be earned over the holidays. During the harvest we used to play in the wheat in the backs of the trucks that lined up to get weighed in first thing in the morning. The soil along this bit of road was always soft as soft from the heavy trucks driving over it. There are lots of happy memories in this view. 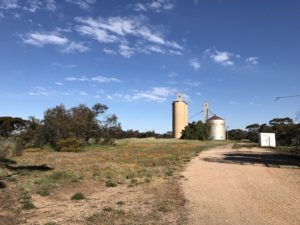 As small children we spent a lot of time playing on this old piece of farm machinery that was near our house. And we loved squishing the paddy melons that wer everywhere. I didn’t capture a picture of the bindi eye thorns which were the bane of our lives. 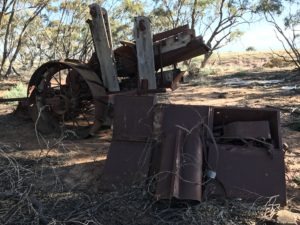 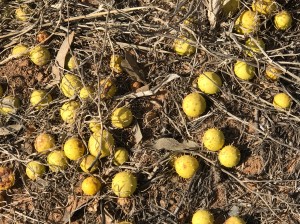 A final stop for a final bit of nostalgia at the road named for our cousins, who live along this road. Currently one family; there used to be five or six. Descendants of Dick Doran. We are descendants of the Fred. 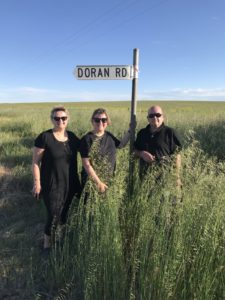 And then goodbye Watchupga. This was always our final view, on our way back to school, back to Melbourne, away to where the world was, away from here! 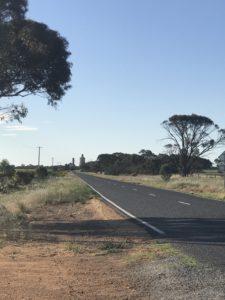 Our visit took me back to this poem by Dorothy Hewett, remembering her childhood in Western Australia.

I will cross the porch
pushing open the flywire door
the room will be full
of the hush and pull of the see
I will see the children circling the oval table
with the dark blue inkstains
playing Rickety Kate
their earnest faces bend to their cards
they don’t look up
even when I stand beside them
they will not know I am there
I will point and tell them
which card to play
but they wont’ hear me
My father lies reading
under the lamp on the sofa
my mother washes up
in the tin dish on the kitchen table
the fuel stove burning behind her
the scrub closes round the house
and the sea listens
outside through the window
the light on Breaksea
flickers on and off.

nothing will stay in its place except the sea and the little house
and the black crags showing
above the line of the rip
that will not stop flowing.

Opposite our old house, this gum tree is flowering, may it long continue to do so … 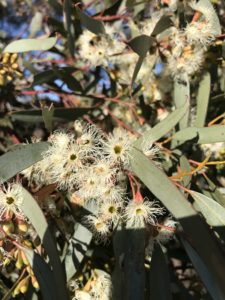