This wonderful exhibition was presented at the National Museum of Australia from 15 September 2017 to 28 February 2018. We were lucky enough to visit on 22 January 2018. As explained in the accompanying catalogue, by senior law woman and traditional owner of the Seven Sisters songline, Pitjantjatjara and Yankunytjatjara lands, Inawinytji Williamson, The Seven Sisters Tjukurpa, our Dreaming creation law, is very important to us, we hold it strongly and teach it to the generations that come after us… We have brought the song, story and paintings full of Tjukurpa, the creation spirit of the Seven Sisters to our Canberra Exhibition. We want to show this major creation story here so many other people can look, learn and increase their understanding. The whole exhibition succeeds admirably in increasing our knowledge and understanding of this centuries old culture. In doing so it utilises modern video technologies as well as more traditional artistic forms.

There are a the large number of paintings, most painted specifically for this exhibition but others drawn from a variety of sources such as Janet Holmes a Court’s private collection and Victoria’s NGV. There are ceramic pieces, woven sculptures and video portraits of women (and a couple of men) telling their personal connection to these stories. There are also videos of dances and songs. What’s described as a dome experience lets you lie under an unfolding sky and are immersed in the landscape that have given rise to these stories.

The single creation story is of seven women, the seven sisters, who are pursued by a man across Australia, from East to West, across Martu Country and Ngaanyatjarra Lands in Western Australia and across Anangu Pitjantjatjatjara Yankunytjatjara (APY) Lands in the Northern Territory and South Australia. The routes that they follow across country are the different songlines; for example the two Martu songlines are Pangkal songline that runs for 100 kilometres from west of Roebourne, and the Parnngurr songline that follows the 600 kilometres of the Canning Stock route. They describe and explain the formation of both the physical landscape and customs of that country.

Despite the distance traversed, the story remains essentially the same; the sisters are pursued; they tease and taunt their male pursuer. But as they move from country to country they change their names; for instance the women are Minyipuru In Martu country, Kungkarrangkalpa in Ngaanyatjarra country. The man is Yurla in Martu country and Nyiry in Anangu Pitjantjatjara country. all the time trying different stratagems to catch the women. The stories have both spiritual/cultural and practical purposes. They tell of the impact of transgressive behaviour as well as the location of food and water necessary for survival in the desert.

There’s lots of open sexual physicality in the stories, told with much humour; much talk of lust on the part of the man and his wandering penis, while the women tease him, exposing their genitals. He changes form, into snakes and flowers. They fly up into the sky. Many of the stories relate specifically to landmarks; mountains, hillock, trees, medicinal plants, hidden springs and waterholes.

All of this gives rise to paintings that are fantastically diverse even when they are telling the same story. So many different combinations of colour, so many different patterns; but all incredibly vibrant. And accompanying panels explain the significance of the work, what part of the songline it relates to. Below are some of them. It was hard to know which to select, they were all wonderful. I’ve included the explanatory panel for each. Click on the image to get the full picture. Of course the photos don’t do credit to the real work. 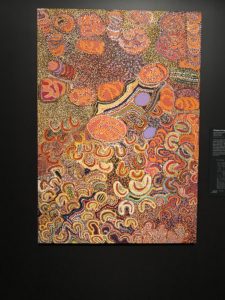 The artist describes the story, Yurla was sitting and watching them … trying to catch one. They used to tease him … They used to fly up … Showing their body to tease him … They were up there! [He] shook the ground when he tried to put it under and she sat up! [giggles] Like making a tunnel through it [creating Pangkal rock hole]. The panel shows how the painting depicts where the seven sisters ares sleeping and camping, their grinding stones, where they danced and where they painted themselves (leaving behind markings on the rocks). It shows teh Pangkal rock hole, a soack and the Tjuma creek. 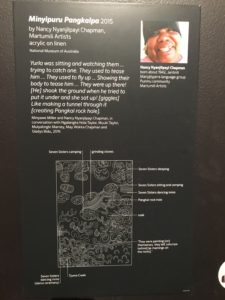 Kungkarangkalpa Atila 2014 by Tjunkaya Tapaya. The artist says; As I grew older I learnt about the significance of that place Atila, its Tjukurpa, the Kungharanghalpa (Seven Sisters) creation story. I am related to that place, a traditional owner of Atila 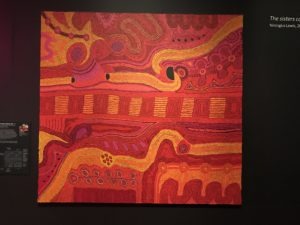 The painting traces the sisters’ journey from Atila in the Northern Territory to Kuli in South Australia. The songline is the sweeping yellow track. They came from the lower right hand corner to Witapula where Wati Nyiru sneaked up on them as they swam, the break in the yellow line shows where the sisters swam underground to avoid him, coming up at No. 3 Bore 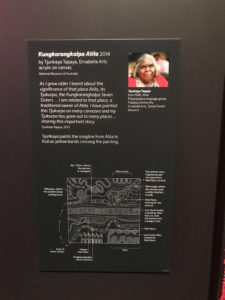 Kuru Ala 2007 by Wingu Tingima. This is a painting of the Kura Ala escarpment. 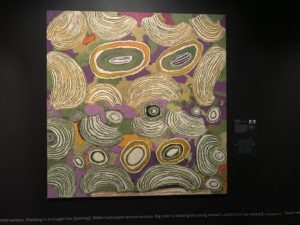 The artist believed that to reveal too much in the painting would have terrible consequences. She has not painted Wati Nyiru but he is presence. The two circles at the top are Nyiru’s eyes in the escarpment. The arcs of parallel lines indicate the tracks make by the many dancing feet of the women. The smaller circles are sisters, there are more than seven. 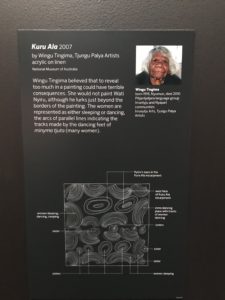 Kungkarangkalpa walka board 2016 by Ningka Lewis. This is a map showing the sisters’ journey across the artist’s country; from Irawa Bore, bottom left, to Mulga Park, top left. 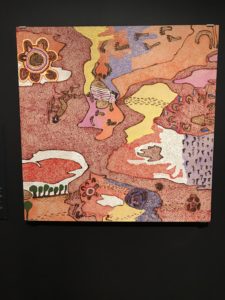 The sisters are the row of river red gums at the bottom left; they are fleeing from Nyiru, who is drawn quite explicitly towards the tope left corner. The womens’ footprints are seen just before the place where they dive into Witapula rock hole. They re-emerge in the top left hand corner, resurfacing at N. 3 Bore on the site of an ancient waterhole near Mulga Park. 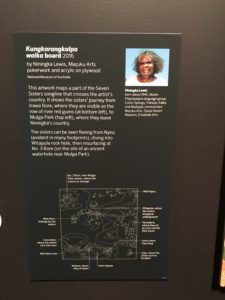 There was also some of the pottery on display; seven pieces by seven women artists, all illustrating the different foods into which Wati Nyiru transformed to in his attempt to seduce the sisters. 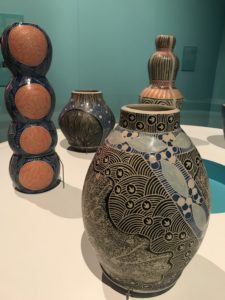 There were also piti bowls decorated with scenes from the seven sisters stories, woven baskets and coolamons as well as spears and shields on display. And these writhing snakes; made by six artists, four women and two men over the period 1982-92. 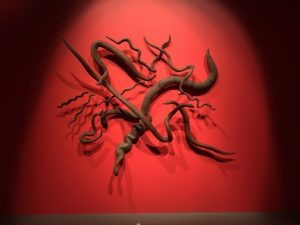 This is a screen shot of a film included in the exhibition. It is of a performance of the Kungkarangkalpa: Seven Sisters songline imma (ceremony) as part of the Centenary of Canberra celebrations in March 2013. It was performed by twenty senior song women and men from the APY lands. A unique event. 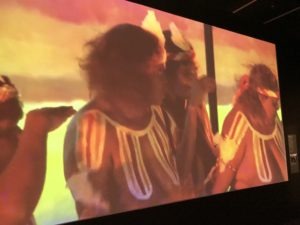 Here are some more paintings. There were so many beautiful ones. The ones in this blog are a tiny proportion.

Kunawarritji 2007, by Nora Wompi. This a painting of the sisters standing up as a group of desert trees between two water wells, Nyipil [Well 34] and Kunawarritji [Well 33].

Minipuru Claypan 2007 by Bugai Whyoulter, Martumili Artists. This is a claypan on the Canning Stock Route which follows the same waterholes that the seven sisters, called Minyipuru on Martu country, rested during their journey. I love the colours. 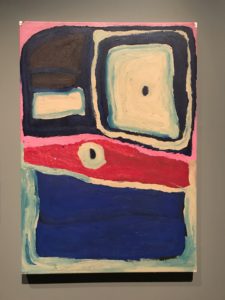 Pangkapini, Minyipuru 2007 by Mulyatingki Marney. At Pangkapini the sisters took revenge on Yurla: The ladies watched him sleep, and whn he woke up he grabbed one of them … The ladies made Yurla collect wood foe them and promised to stay with him. They teased him saying, ‘Come and get us!’ and he began to sing a man’s song and ran away happy, his hear was beating fast. Bt the ladies were tricking him. They were floating in a long line in mid-air and … made a kumpu (urinated) on his face, until he couldn’t see anything … He got a janga, a ladder of wood, and tried to reach them but they just floated higher and then kept pushing the ladder over when he got too close. He got tired and fell down, crawling on his stomach …Poor old fella, he was trying and trying and trying … he had a rough time! 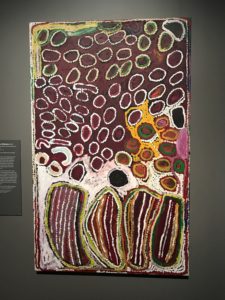 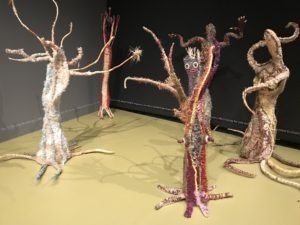 And a close up that shows the skill involved in making these. 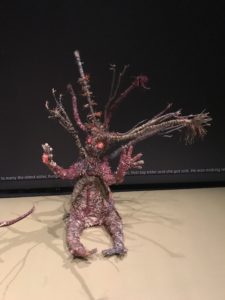 Here is one of the more explicit paintings of the seven sisters, Kungkarrangkalpa (Seven Sisters) 2014 by Angilyiya Tjapiti Mitchell, Papulankutja Artists. This shows the sisters at Minyma Ngampi. According to the description, The blue circles are holes made by the women’s digging sticks. In the cnetre of the painting is the kuniya(carpet snake), the ‘meat’ belonging to Wati Nyiru, whtich the women cook and eat, making them sick. The Seven Sisters are shown in groups, staggering and vomiting around the camp fire watched by Wati Nyiru with his crossed spears. Once they recover, the women ascend into the sky and become stars. 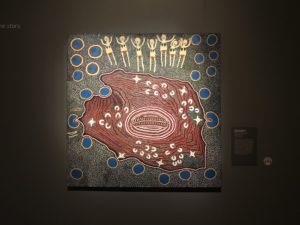 And here are the sisters flying into the sky where they remain, fixed as stars in the firmament. 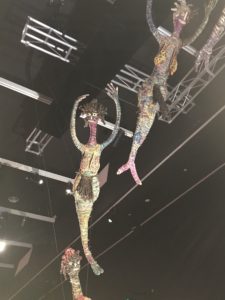