This exhibition is on at the National Portrait Gallery from 10 November 2017 to 4 March 2018. It was fun. Big and small photos; behind the scenes, stills from rushes and publicity shots; from a range of films. It wasn’t as extensive as I thought it might be.

There were photos from the very olden days. All of the actors publicity shots and folios clrearly modelled on Hollywood. There were some photo albums and other memorabilia. I was not that interested in this part of the exhibition. But it did show that there have been lots of attempts to capture Ned Kelly on film, from the very first film through to Mick Jagger and Heath Ledger. None of them successful to my mind. In the early days of the Australian film industry there were also lots of Dad And Daves and some Ginger Meggs; thank goodness no longer a focus for our creatively inclined.

I was disappointed there were not many from the early stage of our modern Australian film period, in the 1970’s which I remember well. There was quite a bit on the awful Barry McKenzie (1972) and Alvin Purple (1973) both of which I loathed. But only a small photo of one of the titular cars from Peter Weir’s The Cars That Ate Paris (1974) and a shot of a young Simon Bourke from The Devil’s Playground (1976). I don’t think I could watch that now – ahead of it’s time.

But disappointingly there weren’t any from Homesdale (1971), an early Peter Weir film starring Grahame Bond and Kate Fitzpatrick, and an uncredited Phillip Noyce, The Office Picnic 1972, another great performance by Kate, Love Letters From Teralba Road (1977), starring Bryan Brown’ and Kris McQuade. Those films seem to have disappeared from our collective consciousness and they were so good.

On the other hand I didn’t expect to see the clothes from some seminal Australian movies, so that was a bonus. In any event the familiar blockbusters were all represented. Here is a lovely wall size photo, a publicity shot I think, of Sam Neill and Judy Davis from My Brilliant Career (1979). This film took me back to Miles Franklin and her novel. It really resonated with a girl from up the country; I was Sybylla. And whilst I was, of course, an emerging feminist, I did wish she’d married Harry. But then we wouldn’t have either book or film. Or the forthcoming television series. 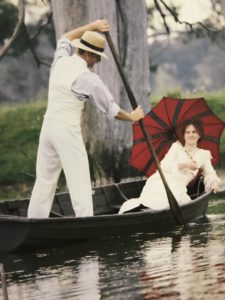 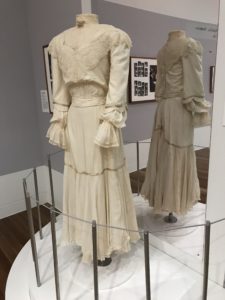 The exhibition had all three dresses and accompanying shoes worn by Hugo Weaving, Guy Pearce and Terence Stamp, that’s their billing order, which is interesting, in The Adventures of Priscilla Queen of the Desert (2015). But only photographed this one which was worn by Hugo, who looks to be having so much fun! Such a life affirming film. It was so different from other Australian films. And a revelation to see Terence Stamp in his role as Bernadette; we were used to seeing him as a hard man in British thrillers. As well as being Twiggy’s boyfriend at the Melbourne Cup in 1965! Apparently the offer to perform in this film came at a time his career was in the doldrums. After it’s release, his career took off again. 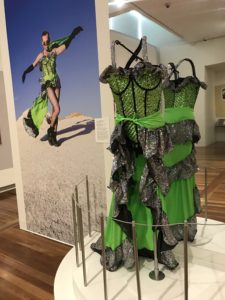 Here’s Miranda, the beautiful Anne-Louise Lambert, from Picnic at Hanging Rock (1975). It’s strange that she didn’t act in many other films apart from The Draughtsman’s Contract, although she did lots of television. This was such an exquisite film. Miranda was ethereal in her white dress which you can also see in this picture. Still beautiful. I saw this with my boarding school classmates; we saw ourselves in the opening scenes of bored school girls lolling about. Even the nuns at Loreto Abbey, Mary’s Mount in Ballarat recognised this was a classic that their girls should see. We didn’t get out for many. 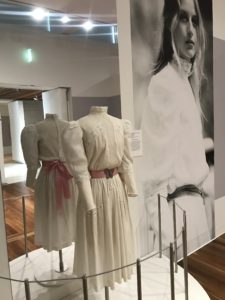 And here’s a photo of our Nicole with the actual beautiful red dress she wore in Moulin Rouge (2001). I loved this film so much I saw it twice and bought the soundtrack. So inventive, so exuberant, at the time so different from anything else we’d seen. I’ve loved all of Baz Luhrmann’s films, yes even Australia 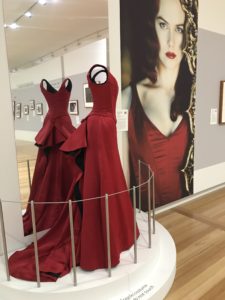 Finally I was pleased to this photo of the two leads from Sweet Country (2017), Hamilton Morris as Sam Kelly and Natassia Gorey Furber as Lizzie. A powerful film and two great performances. I’ve written about it here 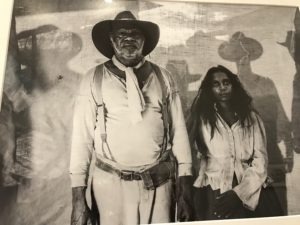