This recipe makes two ciabatta loaves. They are not the prettiest loaves of bread but they are deliciously chewy! 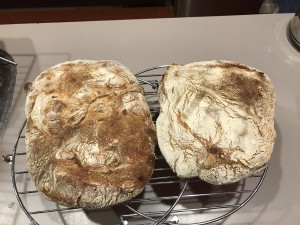 My recipe comes from this book, which I strongly recommend. 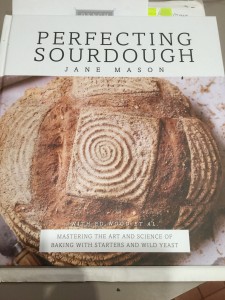 The method is a little different from my basic sour dough which I have described here.

Leaven
200g starter
300g flour
130g water
Mix together in bowl (you will need a medium sized one), cover with gladwrap and leave on the kitchen bench overnight. This will make a relatively thick mixture.

Put the water in a large bowl, add the leaven and mix in as well as you can. It won’t dissolve. Add the flour and the salt. Knead well for 10 minutes. The dough will become smooth and silky. Cover the bowl with gladwrap and leave for four hours.

Prepare an oven tray by placing baking paper on it and create a ridge in the middle. Place either flour or semolina on the paper.

Heavily flour your bench and tip the dough onto it. Divide it into two equal pieces – they should be rectangular. Carefully pull out one side of the dough and fold it into the middle. Take the other side and do the same. Carefully lift the dough onto the floured oven tray. Do this quickly – the dough will be very light and hard to handle. Do the same with the remaining dough. I put rolling pins on either side of the loaves. The idea is to contain them into reasonably shaped and sized loaves, although mine never seem to want to spread too far. 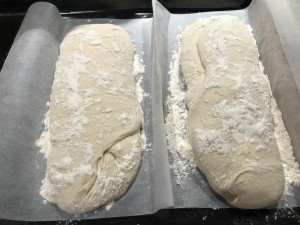 Leave to rest for about two hours. Preheat your oven to 250 degrees celsius. Place the bread in the oven and cook for 15 to 20 minutes.