Ballarat’s first BOAA was great. We visited on the week-end of 20-21 October 2018. First up, we visited the George Farmer Building in Eureka Street. Locals describe it as a former bacon factory. But I surmise it must have been a smallgoods operation and whilst wandering through it I was trying to work out what would have been done where. It was a very evocative setting for the works on show here. High pitched roofs with plenty of light in some of the rooms. Remember to click on the photos to see them enlarged. 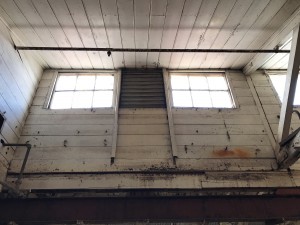 Enormous doors and piping in ceilings; for delivering water and / or smoke. 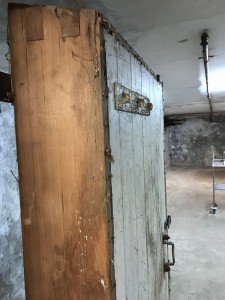 The basement was quite eerie; a long passageway. 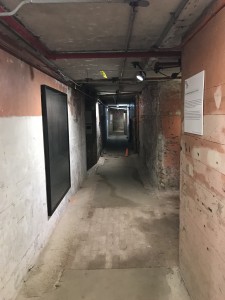 And lots of little rooms off to the side; perfect for delicate installations. 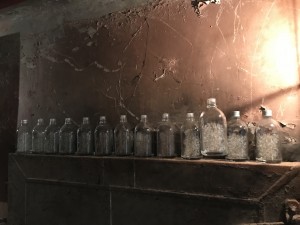 With solid metal doors: for refrigeration? Or heat? 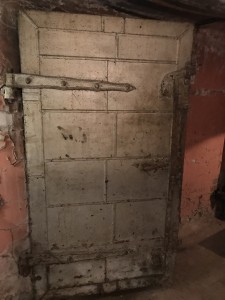 There were lots of works on display at this location – installations, paintings, photographs. Artists were invited to visit the site and then given access to make work in keeping with the locale, like T/her Now/here by Hannah Bertram. 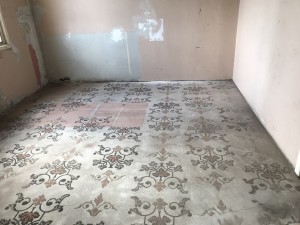 I was really taken with this. Hannah is fascinated with the material and poetic possibillities of dust and the ambiguity of im/permanence. All made with dust. Very thought provoking. She also did it to wallpaper. Both of these rooms reminded us of our old family home which has been left to rot in situ and which we visited recently. Everything is as it was; but is not as it was. Perhaps these evoke the fragility of our human made attempts at civilisation! 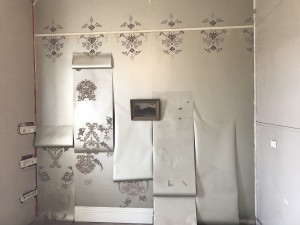 Here’s another site specific work by a group called Skunk Control; it’s not at all clear why they call themselves that! They operate out of Victoria University. 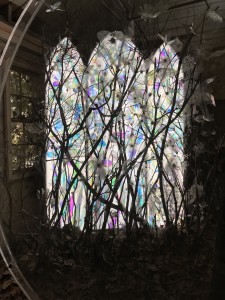 It’s called Fractured Altar; as suggested by the shape of the image. The group is interested in, and use, mechatronics, electonic, optics, sound, lighting and alternative technologies. They create engaging and immersive works that provide audiences with a sense of wonder which this certainly does. A circling mirror in front of this ephemeral structure of twigs, plastic, glass and whatever else, results in the constantly changing colours. A giant kaleidoscope evoking all the wonder that a child looking through one experiences. Here it is from another angle without any of the refracted light colouring it. 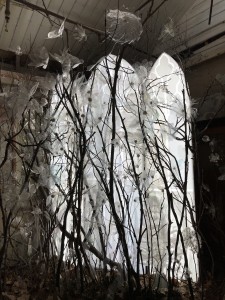 And here is is reflected on the wall. So many different ways to see something and all of them ephemeral but beautiful in the moment. 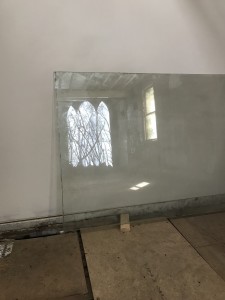 Another installation that took great advantage of the factory location was From Where We Once Were by Mark Stoner. Concentric form, corbelling, stacking structure, gravity, interlocking, interdependence. Onyx, marble, granite, bricks. There was something industrial about the structures appropriate for the setting. It brought to mind ancient dwellings, primitive fires and with the addition of the spherical stones human creativity. Beautiful to look at and thought provoking. 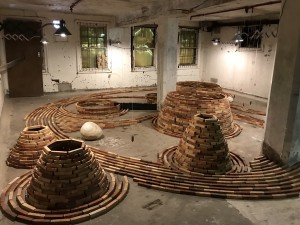 And this, The children of Yanjgarriny by Nawurapu and Djirrirra Wunumgmurra looked terrific in this quite large room, with black and white paintings on the black walls surrounding the painted tubes. These relate to Yirritja renewal ceremony which does not relate to death rites. In the catalogue they are photographed against a background of water but they looked good in this stark setting. 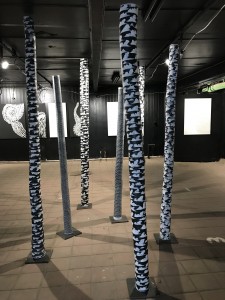 This one reminded me of visits to Ballarat as a girl, wandering in the gardens and by the lake. Swan Song, by Anna Glynn was inspired by her own childhood visits to Ballarat little girl in Botanical Gardens admiring flowers, birds, holding my mother’s hand. It was a beautiful oval shaped installation with a piece of chiffon with photo montages of very familiar Ballarat scenes. The chiffon moved gently as you walked around it. Very evocative. 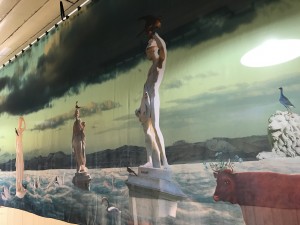 This imposing lion was in the gardens in my youth and is still there; I loved the whimsy and the beauty of the bird. I really loved all of the colours on the chiffon, and all of the images. There was an accompanying wall feature replicating letters from the Ballarat Council to various people and institutions in search of white swans to populate Lake Wendouree. I remember being told about the ulitmately unsuccessful attempt to house white swans on the lake, so this continued the trip down memory lane. 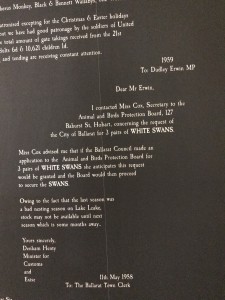 Other pieces were not site specific, like Weight by Akiko Nagio of which this is a detail. It’s a wall hanging with a very strong Japanese feel to it. The real colour is not captured in this photo. It was a beautiful green. I’m not sure what it’s made of, nor what it signifies. There are butterflies on the top; Akiko finds their gaudy patterns and scales fearful but is unable to take her eyes off them. In the final analysis it is just a beautiful piece.

I liked paintings by Tiffany Titshall who’s from Ballarat that were on display. She works in charcoal on paper and is described as a symbolist and a romantic. It says in the catalogue that her work simmers with glimpses of her inner world. And I think this painting achieves something along those lines. The colour is so bold and the woman exudes both strength and fragility. Powerful. 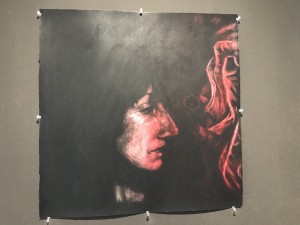 And some by Bruce Armstrong whose work I have seen before but which I like for it’s dark tones and mystical quality. There’s something eery about them all. I liked this eagle in it’s hood which makes it look like a monk; to my mind anyway. 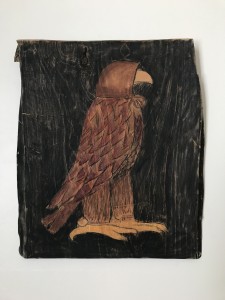 He also had one of his famous sculptures on display; you might see a resemblance to the two giant wombats outside the Australian National Gallery. 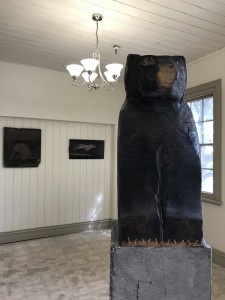 And this was a bit of fun although with a serious environmental message. It incorporates history and land management practices in its images. It was very large, you could have entered it if you wanted to. 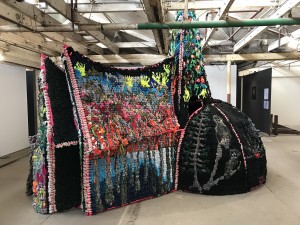 It’s called Green Asylum by Charlotte Haywood and is large-scale architectural tapestry weaving through which the artist explores multi-modalities of landscape, culture and narrative. Here’s a close up of the weaving. 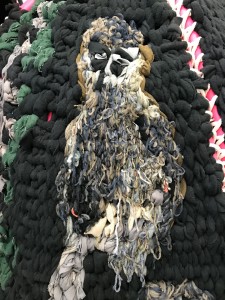 I found Kim Percy’s photographs entitled Fourteen very evocative. She’s exploring the developmental journey of her oldest son in the works on display. As she says, fourteen comes at a pivotal time between childhood and adulthood, it is an age of growth, identity and hope. Beautiful idea and beautiful pieces like these two. 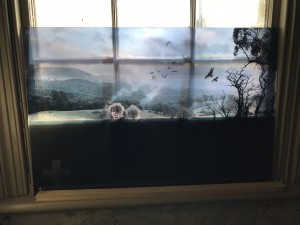 I liked the way you get an incomplete view of the boy and his friend through the window in the top image suggesting the totality of his life and his relationships cannot be seen. And I found the motif of birds thought provoking; are they representing ideas, emotions, emerging identity? In the image below we see them moving beyond himself and out into the world. 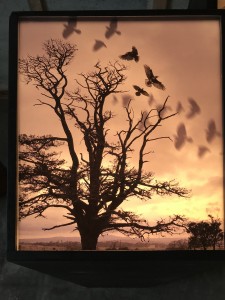 This installation in the basement was sort of spooky but interesting to those of us who’ve been involved in trying to save the Australian car industry. The glossy black sculptures are made from car panels! They looked great without knowing where they came from. So glossy, so black, such great shapes. Primordial even. Knowing they are melted down car parts gives additional poignancy to the landscape; its a lost one as far as Australia is concerned. Automative Geologies by Jason Waterhouse. Clever. It had an accompanying soundtrack. 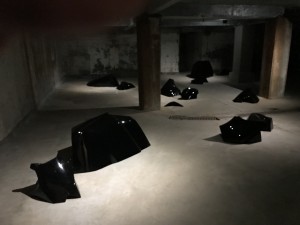 There was lots more to there, which I have not recorded. A very eery video of a performance piece in the basement was too gruesome for me. And lots of other pieces were interesting enough. But those I’ve featured here were the ones I liked best. We were there for over an hour and could have spent more time but we had to keep moving to other parts of Ballarat to continue our Biennale experience.