This is a wonderful restaurant at 83B Gamon Street, Yarraville. We went last Wednesday night. Saturday nights are booked out until the end of the year. It’s very small, with room for about 25 diners, some sitting at a bar overlooking the kitchen. But that’s not the only reason it’s hard to get into. The food was spectacular. There’s a set menu and this was ours. 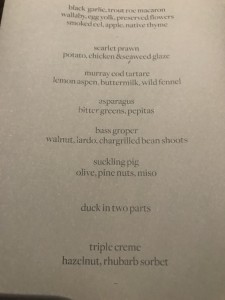 We were asked at the start whether we had any special dietary requirements. One of us was a pescatarian which she’d mentioned when booking and beautiful substitutes for the two meat dishes on the menu (wallaby and duck) were provided without fuss.

Each course was beautifully presented on crockery made by the chef and owner of the restaurant, Julian Hills, formerly of Paringa Estate on the Mornington Peninsula. The name Navi means Local in Cherokee and is a nod to Julian’s American heritage. He grew up in country Victoria and has a Bachelor of Fine Arts (Ceramics); hence the beautiful plates. He brought out a number of the dishes himself and it was lovely to discuss aspects of the cooking with him directly. The restaurant is his own space to create a balanced tasting menu using ingredients sourced from small producers and local farms. You can check the restaurant website here.

We started with black garlic, trout roe macarons. Very hard to describe the taste which was both savoury and sweet; nearly liquorice but not. Very interesting. 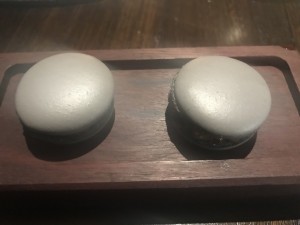 And these two tiny bites were the wallaby, egg yolk, preserved flowers (one of them with wallaby replaced, not that you would have known from looking); on the outside of the plate. A roll of deliciously tender, moist meat. And, in the middle, smoked eel, apple, native thyme. 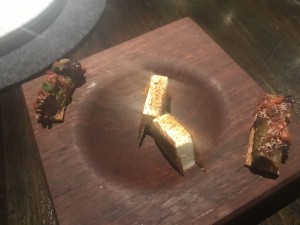 Taste sensations all, although consensus at our table was that the eel custard finger was best.

Next was the scarlet prawn, potato, chicken and seaweed glaze. As instructed by Chef we ate it all. Terrific combination of textures and taste. Crunchy bits on top and underneath a surprisingly large, succulent prawn. 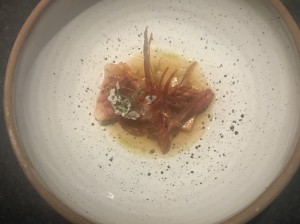 Here is a picture of the murray cod tartare, lemon aspen, buttermilk, wild fennel. As you can see a small dish; soft and creamy but with a subtle and quite delicious flavour. 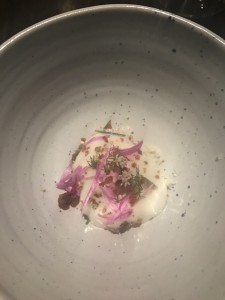 Next up, asparagus, bitter greens, pepitas. Each dish was very pretty; they say you eat in part with your eyes and we certainly did so here. Perfectly cooked, crunchy asparagus, the sweetness counterbalanced by the greens with little crunchy pepitas throughout. 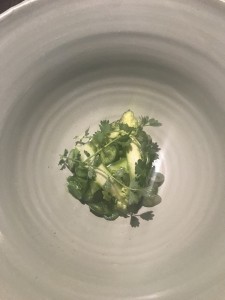 Then came the first of three main dishes; although none were as big as usual sized mains – which was good! This is the fish dish; bass groper, walnut, lardo, chargrilled bean shoots. The combination of tastes worked perfectly. 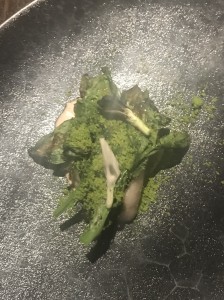 The second, main; suckling pig, olive, pine nuts, miso. Reading the menu, I wasn’t expecting this; an unusual take on peking duck. We wrapped the miso pancake around the sliver of moist pork meat and crispy crackling and ate it with our hands. 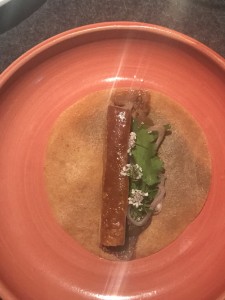 Duck in two parts was another surprise. On the bottom of the picture is one of the best pieces of duck I’ve ever had with an accompanying plum sauce. In the bowl is a custard made of duck consomme with other bits and pieces – a completely inadequate description! As you can see, my photography is getting a bit wonky at this stage of the night! 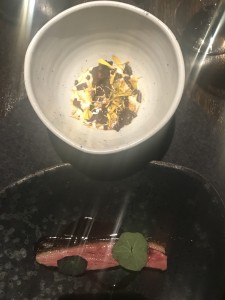 We had three desserts. Often at this stage of a meal I find myself unable to partake of the sweet offerings. Not so this night. The whole meal is perfectly proportioned so that you don’t feel in the least overfed. First up, triple creme, hazelnut, rhubarb sorbet 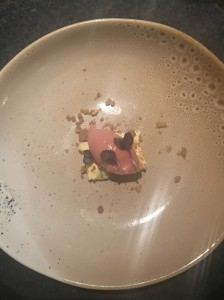 And then strawberry gum and milk sorbet, candied rosella flowers. So pretty! 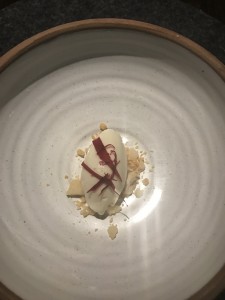 Our final dessert was really surprising. Sourdough ice-cream, chocolate, pear, balsamic. I asked Chef how it was made. Very complicated but yes, they use a sour dough starter, as well as some mashed up sourdough bread. It was delicately flavoured and delicious. I didn’t think it needed the chocolate that lay hidden underneath the lovely crunchy bits, which presumably were the pear and balsamic. This is the only change I would make to any of the dishes served. 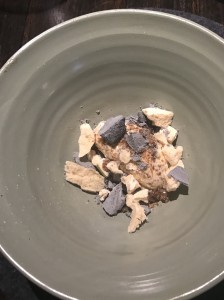 But that wasn’t the end of the meal. Finally we had our petit fours; native fruit jelly, on the outside, and wattleseed chocolate caramel, in the middle of this beautiful, rustic plate. Three of us had a native tea, and one a coffee, to accompany these. 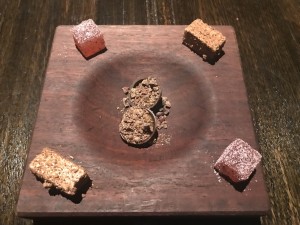 We couldn’t quite work out why, despite not being the last to arrive, we were the last to leave. Maybe our three bottles of wine had something to do with that! They were an appropriate accompaniment to a perfect meal: 2015 Reyneke Chenin Blanc, 2015 Goisot Alisgote Burgundy and 2015 Bachelet Burgundy Blanc.