We made it to two meals at this year’s Melbourne Food and Wine Festival. This is despite the festival’s impenetrable website. It’s really difficult to find out what’s available; perhaps because there is so much on offer. In which case there needs to be a much better way of dividing it into sections. I just pull up the whole program and scroll through which takes ages. Even then, the event descriptions are so brief you can’t really work out what it involves. I want to experience something different, that I can’t go to at any other time and I want a focus on food not wine. International chefs or interstate chefs are of interest. This year there was something called The House of Food and Wine which is where most of the international chefs were participating and it looked as though you had to get day or week-end passes to access them. So no-go for me. As I said impenetrable! Despite the frustration; we got to two events that were both great.

Our first was a dinner jointly prepared by one of our favourite Melbourne chefs, Cutler & Co’s Andrew McConnell and Quay chef Peter Gilmour. We had to book directly through Cutler & Co; maybe Andrew understands how bad that festival website is! It was also one of the most expensive items on the festival program!

So there we were at Cutler & Co on a balmy Sunday evening, the 10th of March. Playing it cool, I didn’t take any photographs of the food! But here are Jen and I looking forward to the night ahead. 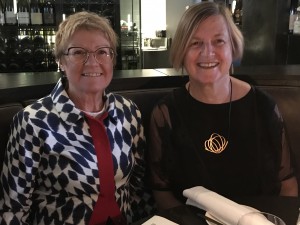 Jen’s a pescatarian and a miscommunication between restaurant and guests meant we were not aware until it happened, that she was going to be served alternatives to the two meat dishes on the menu. Two dishes from Marian Bar next door; both delicious as you’d expect!

Back to the main event, both cooks came out to say a few words before the meal started; although neither said anything memorable it was a nice touch. 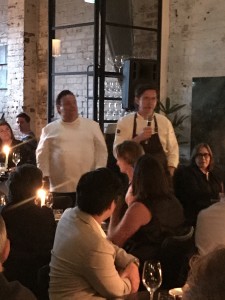 We had fun working out who cooked which dish and our guesses were all confirmed by the waiters. All of the dishes were stunning except, for me, but not the boys (Jen didn’t have it), the Smoked pork jowl, shaved abalone, Lion’s Mane mushrooms, sea cucumber crackling (Gilmour). Hand-picked mud crab , tarragon, ‘clamatao’ salad (O’Connell) does taste different from machine picked – chunkier bits. The King George whiting, brown butter, malt onions & dill (O’Connell) was fantastic, but the stand out dishes for me were the Smoked eel cream, green walnuts, milk skin, cold pressed almond oil (Gilmour) and the Dry aged Macedon duck breast, Beurre Bosk pear, anise and sorrel (O’Connell). We all loved the dessert, Oloroso, caramel, prune & vanilla (Gilmour).

My take out from the meal, never having been to Quay, was that Peter Gilmour likes creamy dishes. Afterwards both chefs came and spoke to all of the tables individually which was another nice touch. We enjoyed all of the wines served with each dish but the stand out was the Austrian Kurt Angerer Roter Veltliner served with the eel.

Here are Joe and Chris at the end of the evening; still smiling and ready for more! We actually walked a little down Brunswick Street looking for the whisky bar to have a final tipple. Fortunately it was closed. 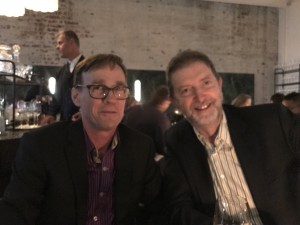 It was a lovely night and a memorable meal.

Joe and my second festival outing was lunch on 16 March at Laura the fine dining restaurant at the Point Leo Estate winery the Mornington Peninsula. Here’s a review from Gourmet Traveller. I know the manager Ainslie; she used to work at DPC before embarking on a stellar career in hospitality including at Pei Modern where we often lunched during DPCD days.

This was another joint chef affair with Daniel Puskas from Sydney restaurant Sixpenny joining Laura’s chef Phil Wood. Another Gourmet Traveller regarding that restaurant to which we’ve never been but about which we’d heard good things is here .

For some reason, we were not able to book the matching wines experience (bloody website) although during the meal we were able to order the recommended wines. Nor did we get a menu so I can’t share that. But I did take photos of the food although I can’t remember their proper names! First we had some small starters accompanied by a glass of champagne out in a little garden adjoining the dining room. They were all fine, although we had another tiny cupcake when seated inside and that was sensational.

Our first entree was this exquisite looking dish. It was calamari atop a duck egg emulsion. Delicious. 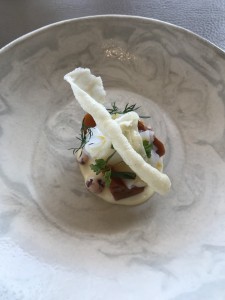 This was, unsurprisingly, mussel flavoured but deceptive because that is not a mussel on top of the corn but rather a mussel shaped mousse. It was a teeny bit rubbery but the corn and the many things that were in it was wonderful. 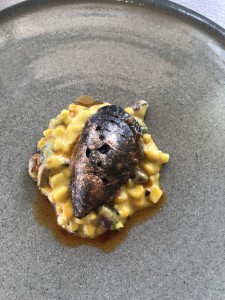 Four glasses of wine along I am getting forgetful so I am missing a photo of the next dish which was something to cleanse our palates before the main which I had half consumed before remembering my camera. Not pretty, but delicious. 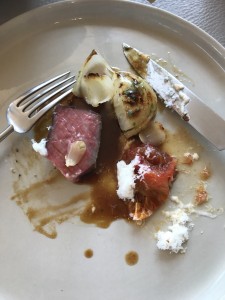 I was even later remembering to photograph the first dessert; which was incredible, a dismembered raspberry one of the key ingredients.

And here is me, between desserts; somewhat pink in appearance due both to the wine and also to the fact that it was a very warm day. 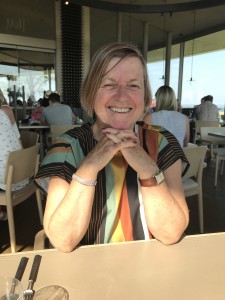 Here was our final dessert which was based around sweet potato. Nice but maybe because I was replete I didn’t enjoy it as much as the earlier one. 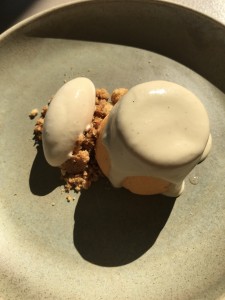 This time the chefs came out after the meal so we were able to give them a round of applause. They had worked together before but as Ainslie said, it is a big enterprise pulling off a successful collaboration like this. We were lucky to get to two. These opportunities are what the festival is really about.

As indicated in the review above, Laura is situated in the middle of a sculpture garden. If you are going to this restaurant you must arrive early – even an hour beforehand – to enjoy viewing all of the sculptures. There are a lot! Here is one next to the dining room that gives a good view of the restaurant as well. In addition to Laura there is a general dining room that was full on the day we were there. Lots of families and big groups. You need to buy tickets to view the sculptures. 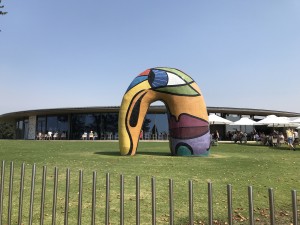 We arrived a bit too late to do the whole walk which was a shame but we managed a little one. Here’s Joe on our stroll before lunch, working up an appetite. 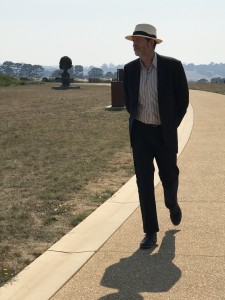 This piece in an adjoining paddock looks like the figure of a boy in a baseball cap and his shadow but as you move towards it the two parts merge and you get a single figure. Clever.

I liked this monumental bird with the small man in marked contrast. You can see how dry the place is at the moment. 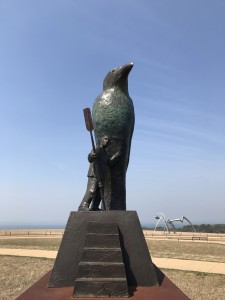 This silver rabbit reminds me of Alice In Wonderland. This gives you a feel for how big the sculpture garden is even though it is only a tiny bit of it. 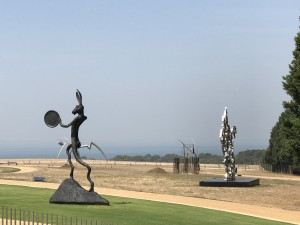 This is the view from the little court-yard where we sat and drank our champagne. You can see through the silver triangles more sculptures further out to where we weren’t able to walk due to lack of time. 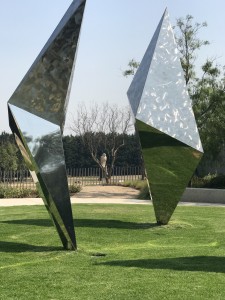 Here I am leaving the restaurant. It was a very fine meal and I strongly recommend a visit. 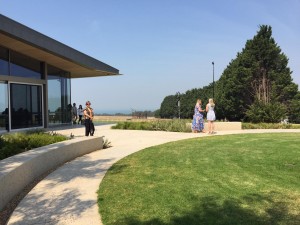 Coming in and leaving you walk past this lovely tree. It’s from Queensland and is not a Boab but does store water.

Later in March, in Sydney, we had another fine dining experience at the Bridge Room. It has two Michelin stars; or rather had as it’s closed down since we were there. A big construction project was happening across the road which may have been a factor in that decision according to the very junior waiter who delivered our bread. The chef, Ross Lusted, is going to open up somewhere else soon, rumoured to be at Crown at Barangaroo. During our meal he came out and was in close conversation with a Japanese couple at a nearby table; we thought perhaps a potential investor!

It was a lovely dining room and was a quarter full at lunchtime. Our meal was quite lovely although I can’t remember exactly what we had! I took a couple of photos. Here’s my crab and nectarine entree. Very pretty (a very poor photograph) but I found the nectarine flavour overtook the crab.

And here is Joe’s dessert which was built around honey and that flavour came through very strongly. 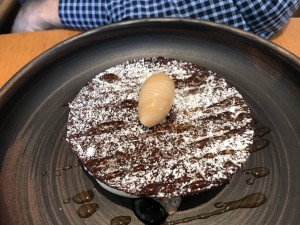 Prior to this lunch, while in Sydney, we really enjoyed a meal at Bloodwood in King Street, Newtown. Investigating where to eat I’d found this had been a best new restaurant at some stage. Here’s a review from 2010 in Gourmet Traveller that gives the feel of the place, including a picture of the entrance. We were lucky to get the last table on the mezzanine floor out the back. No photos of the food – it was quite dark, and anyway too cool for that sort of thing. But here is our menu – the one we used at the table so it’s a bit grubby – they stapled it up into an envelope in which they served our bill. Cute. 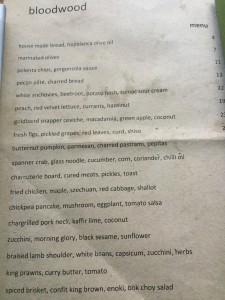 We had the fresh figs, pickled grapes, red leaves, crud, shisa and the spanner crab, glass noodle, cucumber, corn coriander, chilli oil and both were fantastic. Better than the dishes we had at The Bridge Room. The fried chicken dish, not so much. Nor did I like the zucchini dish but Joe did. Then onto dessert. 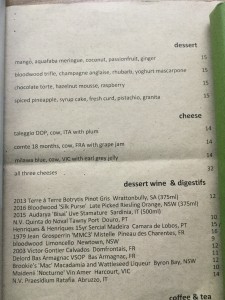 For dessert we had the bloodwood trifle, champagne anglaise, rhubarb, yoghurt mascarpone. Another fantastic dish with the, I think, a glass of N.V. Quinta do Noval Tawny Port from Portugal. Wonderful. If you’re in Sydney I really recommend a visit.

Two other fine dining experiences in March are worth a mention. Also in Sydney I had what Gourmet Traveller calls one of the best fish and chips in Australia at Cirrus in Barangaroo. Here’s the list. And yes my whole flathead looked like that picture and I remembered to eat the meat in the head. I was by myself and had a lovely glass of wine as well. Can’t remember what. The whole cost me $70; $40 for the fish, $30 for the wine. Quality not quantity!

My birthday dinner with family was also special. Hard to find fine dining on a Monday night on a public holiday (Labour Day) even with the Food and Wine Festival happening. I told you the website is impenetrable! But we found it at the Grand Dining Room in Richmond; where Joe and I had been to a memorable dinner at last year’s festival – another collaboration, this time with Anchovy. Anyway I strongly recommend this place. Great food. Lovely spacious dining on a carpeted floor. So always worth remembering if you want to eat out on a Monday and if your party includes anyone who is hard of hearing! But it’s the food that makes it worthwhile. Top notch.