I’m astonished I haven’t written a full blog about books since January! It’s time to catch up. It’s been a very mixed bag. Some disappointing light weight novels and drearily ponderous biography! I’ll start with February.

First up, The Lost Man by Jane Harper. This is her third thriller and the first without her reluctant hero, Federal police investigator Aaron Falk. But like her two previous novels the landscape is a potent character. This time we’re in the unforgiving landscape of outback Queensland. There’s no doubt she does write about locations very vividly. This is sort of a family saga; two brothers in love with the same woman, a matriarch, a loyal retainer, a vengeful ex-wife, surly teenager, a couple of smaller children. All quite nicely drawn. I like her endings! Thinking about it later, as one does, I wasn’t sure the characters of the brothers – both egregiously misunderstood – were quite plausible. But the story swept me along despite any misgivings.

I’ve written about On The Beach by Neville Shute here. I really loved it. The immanent end of the world so plausibly drawn. So though provoking. What would you do? How would you feel? I loved the complete absence of any political or ideological agenda here. He’s not concerned with who started the world ending cataclysm. Just the effect on ordinary people. I thought it was wonderful.

I’ve also touched on the parts of these two books that I’ve read, The Wagner Companion edited by Peter Burbidge & Richard Sutton, and Opera’s Second Death by Slavoj Zizek & Mladen Dolar here. They were both dense and difficult and I read the parts about Parsifal many times over so these two took up a lot of my reading time in February.

In March I finally got to a book that I’ve had in my iPad for a long time – my New Years Resolution to not buy new books is having the desired effect. I enjoyed A Curious Friendship: The Story Of A Blue Stocking & A Bright Young Thing by Anna Thomasson a lot. It’s about a woman I’d never heard of – Edith Olivier – and her friendship with Rex Whistler who I’d not heard of either. Both of them however were connected to people I’ve read a lot about; the Mitfords, Sitwells, Duff and Diana Cooper. Even Paddy Leigh Fermor gets a mention. Stephen Tennant, widely regarded as the model for Sebastian in Brideshead Revisited is a key character as is Cecil Beaton and Siegfried Sassoon was a great friend of Edith’s. He was much younger than her and from a markedly less affluent background. She was not of the aristocracy but closely associated with one of the great houses. He was much younger than her. Their friendship was platonic and I found their story very interesting. Whistler was an artist and in many respects a bit of a hopeless fellow. Edith was a firm friend and supporter. She was a woman ahead of her time. I’m pleased that Anna Thomasson has rescued her from obscurity. If you’re interested in that milieu you’ll find this book interesting.

I then re-read Evelyn Waugh’s Vile Bodies because he has a bit part in the lives of Edith and Rex and his novel is meant to refer to many of the bigger players; Tennant and Beaton included. I didn’t like it the first time around and didn’t like it all over again!

For some light relief after my Wagner immersion I read Peril At End House by Agatha Christie. A fun way to spend an afternoon but I was vaguely disappointed I guessed who did it and I never do that!

Come April and I’ve had time for more reading. First up Transcription by Kate Atkinson. This was on a number of best books of 2018 lists so I bought it preparatory to my self imposed no more new books. It’s an easy read about a woman who gets caught up in the world of spooks and spies. I’ve read similar and better novels on this; especially a great William Boyd one called Restless which I’d recommend before this one. An even better read are the real life books about spies by Ben Macintyre; A Spy Among Friends and especially Double Cross which has a similar story-line to this one. This novel is based on real life events although the author has taken a bit player, the woman employed to type up transcripts, as the main character. So having a female protagonist is nice although this was also the case in Boyd’s novel. If you haven’t read any of these spy stories you would enjoy this.

I loved Between You & Me: Confessions Of A Comma Queen by Mary Norris, another that I’ve had in my iPad for ages. She’s been a long-time copy editor (sub-editor in Australia) at the New Yorker. I’ve been watching her lovely little video talks about various aspects of punctuation and grammar for a little while now. Since I subscribed to the New Yorker I suppose. They are great. Here’s an example. It’s very dense and I rather wish I had it as a paper book that I could put sticky notes in to let me refer to it while I’m writing my blogs. I don’t know how to annotate an ebook although no doubt there’s a way. Anyway this is a great reference book and I think I will return to it often!

In Her Wake by Amanda Jennings is another I bought on the eve of my buying new books pause. And another that was on lots of best of lists but I found it disappointing. The author, a former BBC journalist, is interested in how people react to / recover from (or not) trauma. I found the set up implausible. Lost children, catatonic adults, wasted lives. All a bit grim. It’s set in Cornwall which is described nicely. (I loved Cornwall when I visited a very long time ago). But overall a bit slight and contrived I felt.

So I went from facile to furious! Schopenhauer And The Wild Years Of Philosophy Rudiger Safranski was heavy going! As you would expect from this cover. 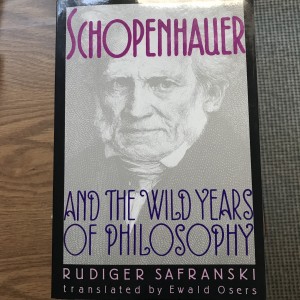 He was a very unpleasant man, even as a young man. Judgmental and completely lacking in any emotional intelligence by the sound of things. The book presupposes a reader with detailed knowledge of German history and European history, the major personages in German literary life of the period – Goethe and friends – as well as detailed knowledge of German philosophical trends including Descartes, Kant, Hegel amongst others that I’d never heard of. So hard going. I did like his mother though. Who once her husband died threw herself into German literary life including developing a strong friendship with Goethe. She became a very successful author. She also gave Schopenhauer very good advice from the time he was a young man. But he was hopeless. This is another book that I’ve had for a long time so I’m pleased I’ve finally waded through it!

I needed light relief from the above and so picked up Excellent Women by Barbara Pym from the library. Looks light and frothy – but it isn’t! 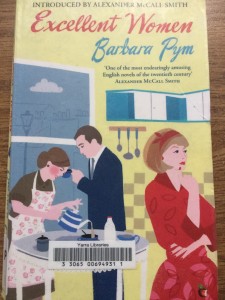 It’s been on my to readlist since someone somewhere suggested it was her best novel. I’m actually going to stop reading these novels by English women authors of a particular period – Pym, Muriel Spark, Penelope Fitzgerald et al. They are great writers, but bloody depressing. This one goes on about the status of unmarried women and what is expected of them. It’s all very perspicacious and true – even now in this day and age. Without hapless Anglican ministers and insular, dutiful church communities I hope – but even they might be still around. We certainly have plenty of modern alternatives to organising church fetes. But depressing. It had a good ending. You’re left not knowing what our heroine will do. All of her future options are a bit dispiriting – running rings around one hopeless bloke or the other – or a dreary life alone doing good works and being under-estimated.