In March Joe performed at Hamer Hall, along with a couple of hundred other Melbourne guitarists. The Those Who Rock concert was funded by the Betty Amsden Participation Program run by the Arts Centre Melbourne. Betty Amsden was passionate about community participation in the arts and this event certainly encouraged that. Over 200 Melbourne guitarists answered the invitation to be part of this concert. Joe and our neighbour (and JOe’s guitar teacher) John were among them. They went to a number of local rehearsals in Fitzroy before coming together for the big night. Similar groups were rehearsing in Frankston, Dandenong, Werribee, Doncaster and Sunshine. What a great idea. For the concert they were all allocated different colours; Fitzroy’s was red.

Here’s Joe in his Jack London red shirt (very stylish) on the Sunday night outside the Hamer Hall with the concert banner. By the time we left, a few hours later, the banner was gone! 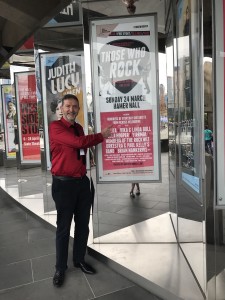 And here is the programme. Different choirs; one a deaf children’s signing choir and another of people who had suffered strokes called the Stroke a Chord Choir. Fantastic. Guitarists from the different areas around Melbourne and different vocalists. 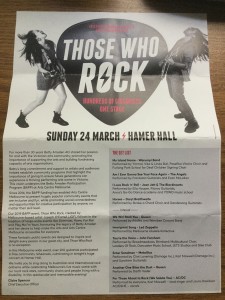 They had all got there early afternoon to rehearse; mostly the getting on and off stage. A big logistical effort! Up and down stairs. 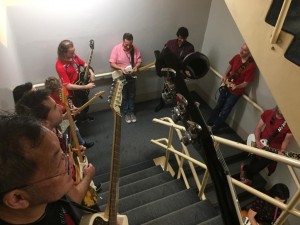 And onto the stage in the empty auditorium. 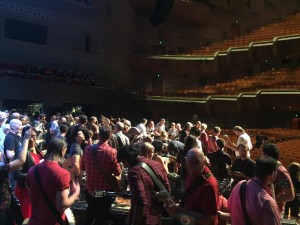 And here’s John during the rehearsal period – psyching himself up for the big event. 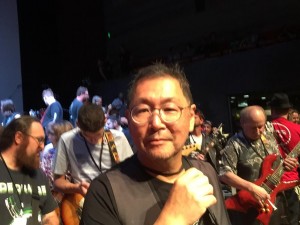 We arrived early enough for a quick meal and a couple of drinks beforehand around the corner. So this is taken while we were doing that. 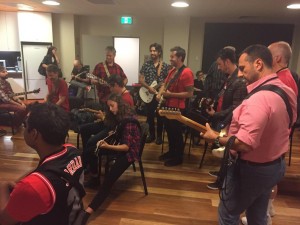 Outside in the hall the audience was treated to a guitar playing rabbit as the warm up act. 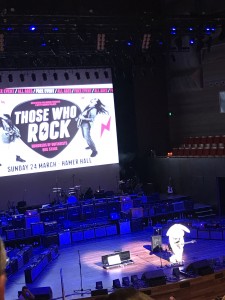 Brian Nankervis from the SBS show Rockwiz (and much else) was the host for the evening and a very good one. 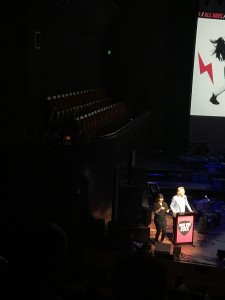 And here’s Fitzroy! The third act, singing I Love Rock ‘n’ Roll by Joan Jett and The Blackhearts. 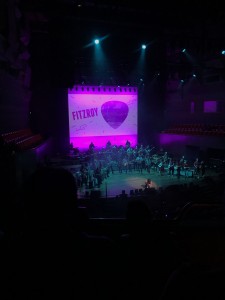 We were able to pick out our boys from where we were sitting up on the second level. Throwing themselves into performing. 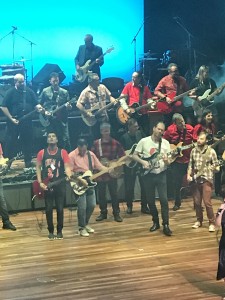 Ellie Hooper was their front singer. She was great, very energetic striding around the stage. 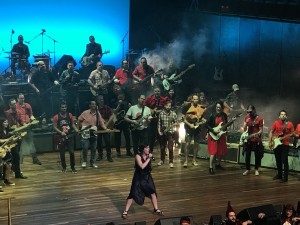 Joe said later that he could see us in the audience. Mary and Kevin and Emily came with us as well as Saskia which was lovely. Here is the performer seemingly looking straight at us! Relieved to have got through the song perhaps! 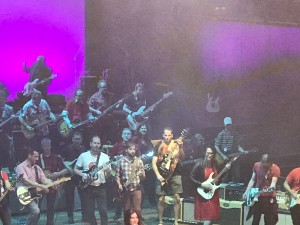 After nine acts it was time for the big finale. All of the guitarists on stage performing AC/DC’sFor Those About To Rock We Salute You. So many of them. Joe’s red shirt standing out even in that big crowd. Such great a sound. So much fun! It was a terrific night. 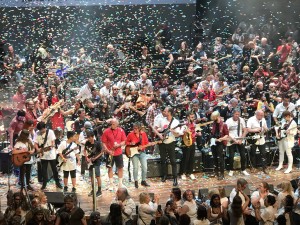