I made it to the M. C. Escher exhibition at the NGV just a couple of days before it closed on 7 April 2019. By accident really, as I was at the NGV for lunch with Iola. Membership proved beneficial when we decided to check out it out; the queue to get in was enormous but we were able to sail through the entrance (but not the rest of it) without waiting.

The NGV describes this Dutch graphic artist as a master of optical illusion and note that he created some of the most iconic images of the twentieth century. Here are some of those iconic works in a map made to help people locate their favourites. 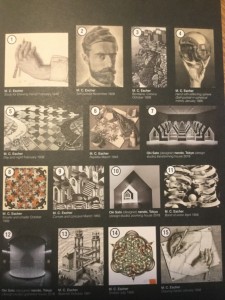 I was familiar with Drawing hands and Hand with reflecting sphere as well as the very surreal Bond of union but have never been very keen on them. It was the lesser known work that I really liked including his self portrait that’s included here and which was very fine.

There were over 150 preparatory sketches, drawings, woodcuts, mezzotints and lithographs on display. They came from the Gemeentemuseum in The Hague and it’s the first time most have been seen in Australia. So it was a unique opportunity. They were being shown in what was called a deeply immersive exhibition designed by one of the leading design studios in the world, nendo. Because of the crowds and the late afternoon, we went through rather quickly and so couldn’t really assess that aspect.

The works were very hard to photograph, both because of the light and the people but I took a few to have as an aide memoir. Click on them to enlarge them to get a better senes of their artistry.

I was taken with this one. It’s a wood engraving, intaglio printed and made in July 1943. It’s called, unsurprisingly, Blowball. Incredible delicacy. Escher liked to experiment with printing techniques and made another version of this same image, but making the dandelion white and the background black. That second version wasn’t included here which was a shame, it would have been interesting to see it. 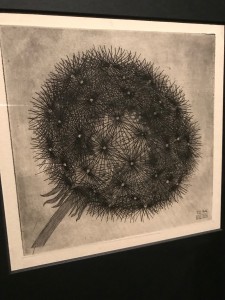 This is another typical work but I didn’t take down the title; there were a number of works containing trees similar to these. Great shapes and contrasting shades of black. 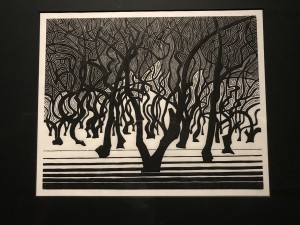 I really liked this one. Amazing detail. It’s called Puddle and is a coloured woodcut from 1952. Very faintly coloured as you can see. According to the note Escher delighted in making his viewers second-guess their perception, an experience sometimes referred to as the ‘Escherian double take’. The note goes on to describe how he has used the surface of the water to create a visual paradox: are we looking down at a muddy puddle, or up at the moon behind silhouetted trees? In this case we are looking at both. I liked the impressions of footsteps seen on either side of the puddle. 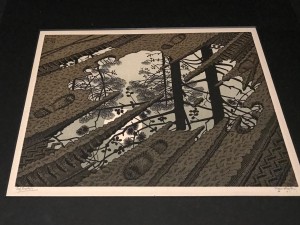 There were some coloured prints; and in most the colour had a washed out look, presumably be design and not as a result of the process used. More fun with optical illusions here with the different perspectives – squirrels the right way up, squirrels upside down – depending on how you look at it. Regular division of the plane no. 7 (Squirrel), 1936, pencil, pen and ink ad watercolour on graph paper. 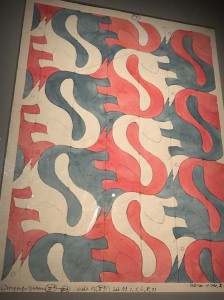 This is another of the coloured prints; this time in blue. Again, it takes you a while to see the dragonflies. And maybe you wouldn’t see them at all without the hint in the title. Regular division of the plane no.13 (Dragonfly) , 1937-38, pencil, pen and ink and watercolour on graph paper. 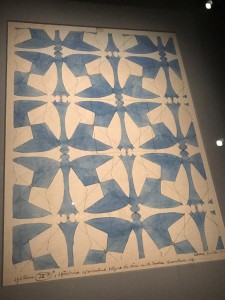 I took the picture below because of the kangaroo which can be seen towards the bottom. It’s a much later work. Plane filling II, July 1957, lithograph. There is no explanation in the accompanying note as to what this is about. The different images all fit together like a jigsaw; white and black, leaving no space unadorned. 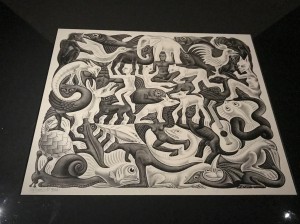 I really loved this architectural one from February 1932. Porta Maria dell’Ospedale. Escher and his wife loved the place where this building is found. It’s the Italian town of Ravello on the Amalfi Coast which is where they first met and they often spent their summer holidays there. He did a drawing of this church first, and then translated it into a wood engraving. Beautiful. 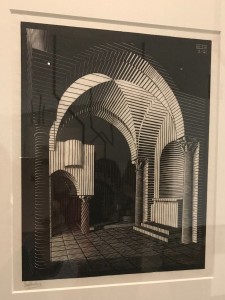 This is another quite beautiful work; with an intriguing name, Regular division of the plane no. 63 (Pessimist-optimist). It was done in February 1944, brush and pen and ink, coloured pencil and opaque white painted on graph paper. 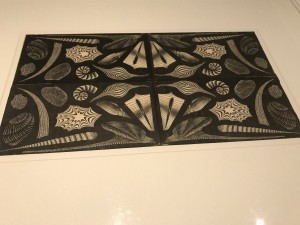 Here’s another that I really liked. Three worlds from December 1955. It’s a lithograph. The three worlds are the one below the water’s surface, signified by the swimming carp, the world above, signified by the reflected trees and the surface of the pond signified by the floating leaves. Escher’s craftsmanship and conummate observational skills – evident in the rendering of leaves, branches and fish – lend this scene its realism. 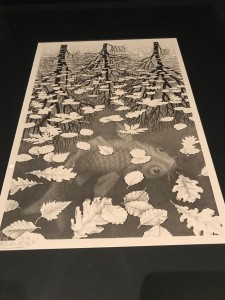 I really didn’t get the whole immersive design thing. Here’s a glimpse of one of the galleries, probably the smallest, and so not really representative. 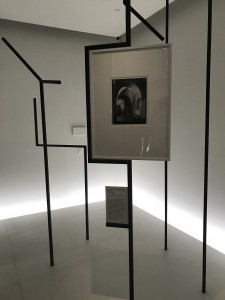 This big piece by the designer Oki Sato from nendo is called gathered house, Made in 2018, it took up the whole room near the end of the exhibition and was impossible to photograph. You can see the whole thing in the photo of the NGV map above. Clever but I wondered, what’s the point? 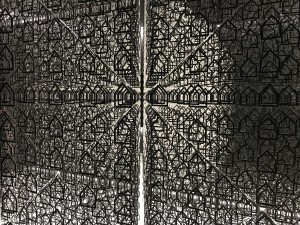 This is one of a number of small installations by Oki Sato of nendo on our way out, transforming house, 2018. It reminded me of the sorts of model houses made by architects which is, I suppose, the point. 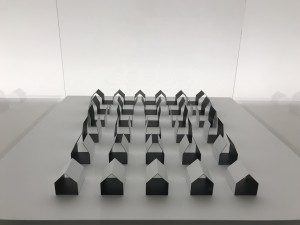 The works by Escher were very interesting and warranted longer and closer inspection. But in the circumstances that was impossible. Perhaps I should have bought the catalogue which contained very good photographs of the works. But I don’t think I would have looked at it that often.

Reviewing his work, I think Escher would have appreciated this photo I took ages ago. Can you tell what it is? My own creative optical illusion. 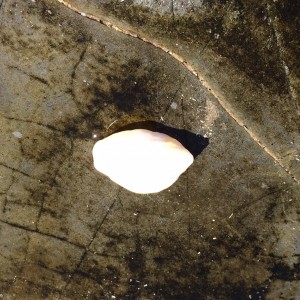