Ever since I saw it a couple of years ago I’ve been keen to take the tourist bus to Chadstone. It goes from Federation Square and I thought taking it out was a good way to check out Melbourne from a tourist perspective. Though, in the event I’m not sure many of my fellow passengers were tourists. I love the fact that it’s a pink bus! 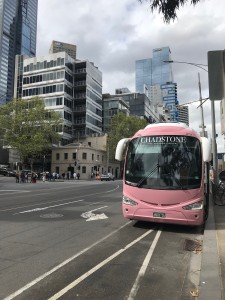 Linda was kind enough to join me. We booked online as required and found ourselves midst a crowd of eager travellers on Monday 7th of October. My second bus trip in as many days! Here’s Linda as we prepare to board; she’s looking a little sceptical about the whole project. 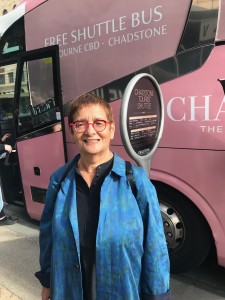 The bus was full, but not with the high end tourists we half expected. Upon reflection we decided well-off tourists would probably take a limousine, or at the least an Uber, rather than the free bus. Instead there were young women, some young families and middle to late aged couples. We took our seats at the front. As you can see I was quite excited! 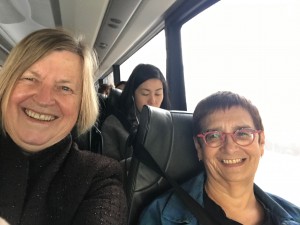 I’d never been to Chadstone. I’m not much of a shopping centre person although when the kids were little we quite liked Victoria Gardens; small and compact and safe enough for them to go to on their own later on. Other than that the only other one I’ve been to is Northland which is big and exhausting and we don’t go there much. Does Barkly Square count as a shopping centre? It seems too small. In any event I had no idea what to expect at Chadstone.

After a 35 – 40 minute drive during which we were shown a video extolling its virtues and the fact that it consists of 550 shops we arrived. To be ushered into the centre through a lounge similar to the QANTAS airport lounge; comfy lounges and make your own tea and coffee. Not that we got to try any of that as w\e were keen to get something to eat; it had been an early start after all.

This rather monstrous feature seems to appear on a lot of the Chadstone publicity including our in-bus entertainment. We didn’t explore what was on top of the tower. 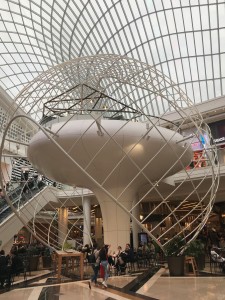 After an indifferent coffee and cake (hey, we’re not in North Fitzroy / Carlton now!) we took ourselves off to the luxury store end of the centre. 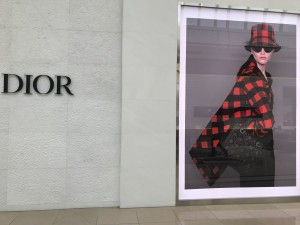 My nephew works here at the male Dior store, so we popped in to see him. A small space but stylish. 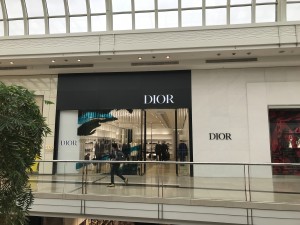 And we could have sat here and watched the high end international tourists go by with their multiple designer shopping bags, but we didn’t. 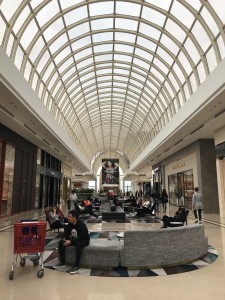 This was quite a stylish section; a cut above the ordinary shopping centre experience I think (although I’m perhaps not qualified to judge). 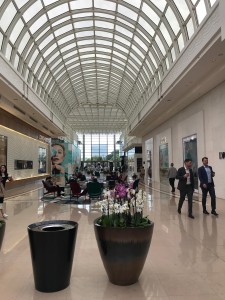 Here’s a nice shop front that caught my eye. 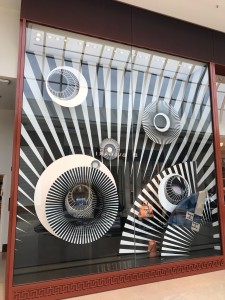 Upstairs and downstairs was the usual mix of middle range stores and eating places. All pretty ordinary and not all that busy. They were having what they called a Golden Week which meant some stores were giving discounts on some things but that didn’t entice us to do much shopping. 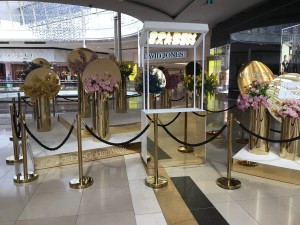 We said yes to a hand massage in a pop up La Prairie shop and received little samples of product which was fun. Two lovely young women attended us. I sought lunch recommendations from mine but in the end we found ourselves up on the top floor and at a Japanese place with a sushi train. 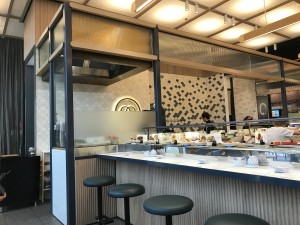 We opted for a table where we ordered via an iPad! There’s a first time for everything. A bit soul-less but efficient. 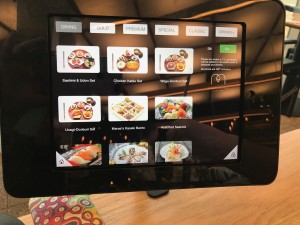 Then we were done so we returned to the lounge thinking we might have time for a cup of tea but it wasn’t to be. The concierge told us the bus was in situ so off we went. Here am I, celebrating our return. Wearing my new designer sunglasses (Oraton). 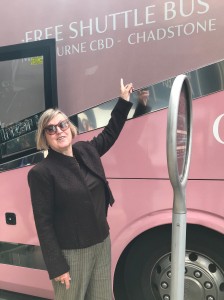