En route to the mallee in early November we stopped off at the Bendigo Art Gallery to see this exhibition. 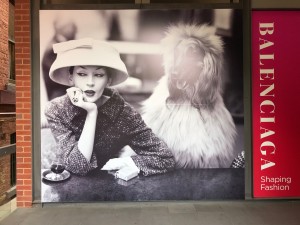 Until recently I haven’t been greatly interested in couture fashion but a combination of movies about fashion designers at MIFF over the years and exhibitions at the NGV have awakened my latent fashion sensibility! This provided a timely coffee break for the driver on the way North and was interesting. As the title says it was both about Balenciaga himself and those he influenced. Christóbal (love the name) cut a dashing figure. 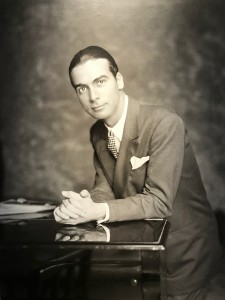 We are told that his clothes were characterised by their sculptural quality, deft manipulation of textiles and dramatic use of colour and texture. Apparently fellow designers call him the Master. His works on display here come from the V&A and are from the 1950s and 60s. Here is a classic Balenciaga suit from 1954 with a stand-away collar, three-quarter length sleeves and a relaxed waistline (in contrast to Dior’s New Look). 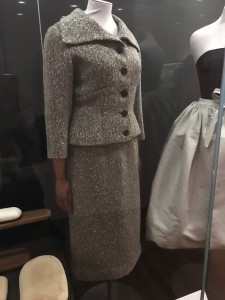 And here they are again. Classic design – you could wear them today. 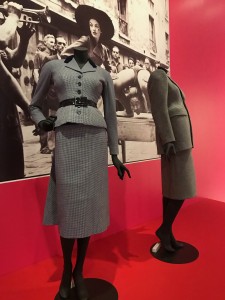 Ava Gardner liked his clothes; she lived in Madrid for a while in the 1950s. Here’s an an evening dress and cape she actually wore – she donated several pieces to the V&A. Trés elegant. 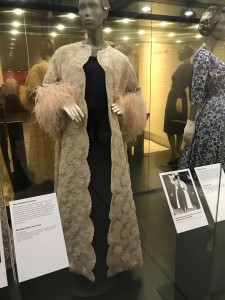 He was known for his loose fitting clothes – again as distinct from the pinched waistlines favoured by Dior. His sack dress caused a sensation. I’m not sure whether this is the actual one, but it clearly fits the bill. 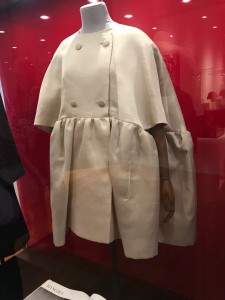 Despite the flowing look of some dresses they were very structured, even including internal stiff corsets like this tulip dress. Seen from the back it includes a large bow reminiscent of Japanese kimono. 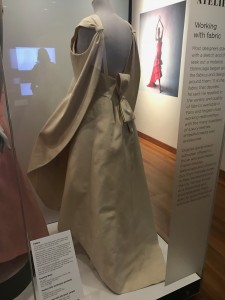 You can see the internal structure in the X-ray photograph that was displayed next to it. 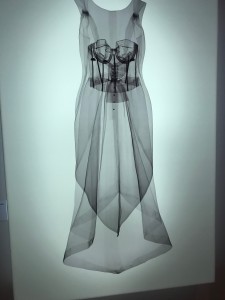 And the flow of this lovely gown was assisted by weights. 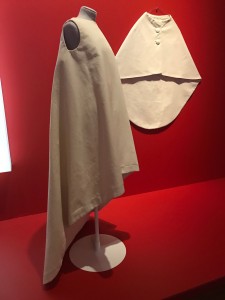 Which can be clearly seen in this X-ray photograph – they are the little discs. I loved these photos – very illuminating. 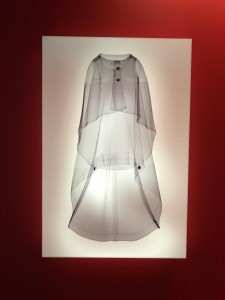 There was one other dress accompanied by an X-ray. I think, but am not completely sure, that it is this lovely evening gown. 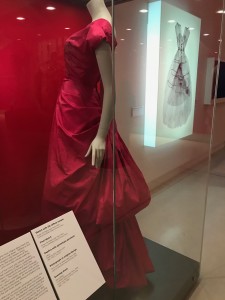 The X-ray shows the boning and hooped skirt. 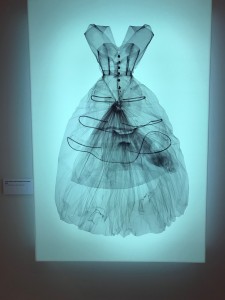 Apparently this dress which was inspired by the balloon skirts of the women of Ibiza who look like clouds walking includes ties which knot above the knee lifting and ballooning the hem. Must have been a bit of a chore getting into and out of, but, hey that’s what we do for fashion! 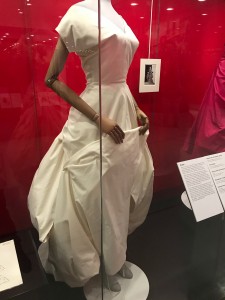 The designer had a practical side. A picture accompanying this skirt, showed it being hoisted up over shoulders to be worn as a cape – two items for one! 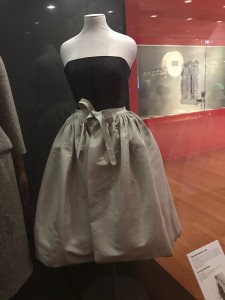 Didn’t look too bad as a cape as this (very poor) photo of a photo shows. 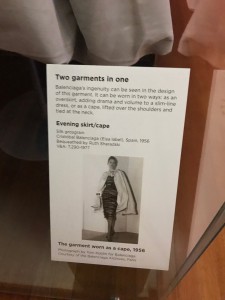 I really loved this beautiful cocktail dress; unlike some of the others, very form-fitting. Exquisite fabric which was commissioned by Balenciaga based on brightly coloured, floral embroidery of Manila shawls … often worn by flamenco dancers. 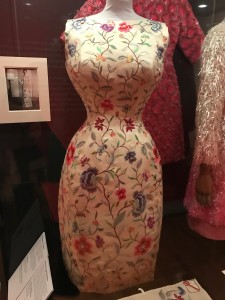 The second half of the exhibition was devoted to the work of designers influenced by Balenciaga. Here is a jacket and skirt from 2002 by the Belgian designer Dries van Noten about whom I’ve seen a documentary (one of my MIFF fashion movies). It’s not immediately apparent what his debt to Balenciaga is; the note merely states he wants to do his own thing! 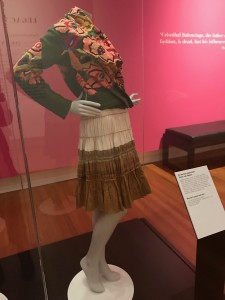 This gorgeous evening dress from Yves Saint Laurent with its attention to fine detail, its beads, sequins and feathers expertly combined demonstrates a more direct link to the Master. As does this feathered evening dress by Givenchy who was actually taught by Balenciaga. It was worn by Gloria Guinness in 1961. Oscar de la Renta worked briefly with Balenciaga as a sketch artist and the floral pattern on this evening dress from 2015 reminds you of the cocktail dress above. 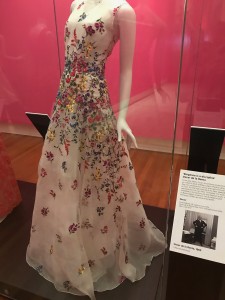 Balenciaga’s influence continues to those who have learned from Balenciaga’s own disciples. Issey Miyake worked with Givenchy and this dress has a similar flow to some of the Master’s own creations (though I suspect without the use of weights). 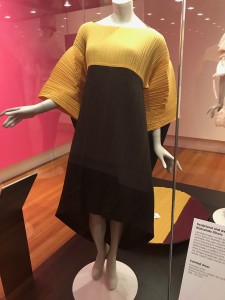 And this monstrosity by Rei Kawakubo seems a direct descendant of Balenciaga’s sack dress. This is from 2017. 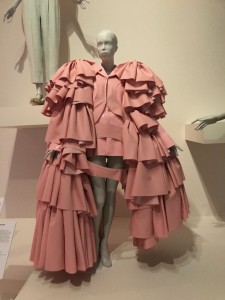 There were a few more like that but I think the link to Balenciaga is a bit tenuous. Don’t all designers pick and choose from a whole range of sources including their forerunners?

Anyway I’ll finish with a couple more photos of his own work. It was quite hard to photograph, being behind glass and therefore reflecting people passing by. And our visit was a short one. But stimulating all the same. 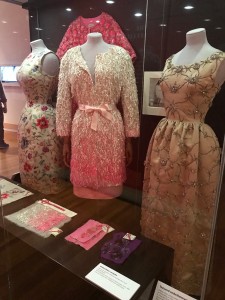