We went to the Secession. Beautiful building, though it wasn’t received as such by the citizens of Vienna when it was first unveiled in 1898. 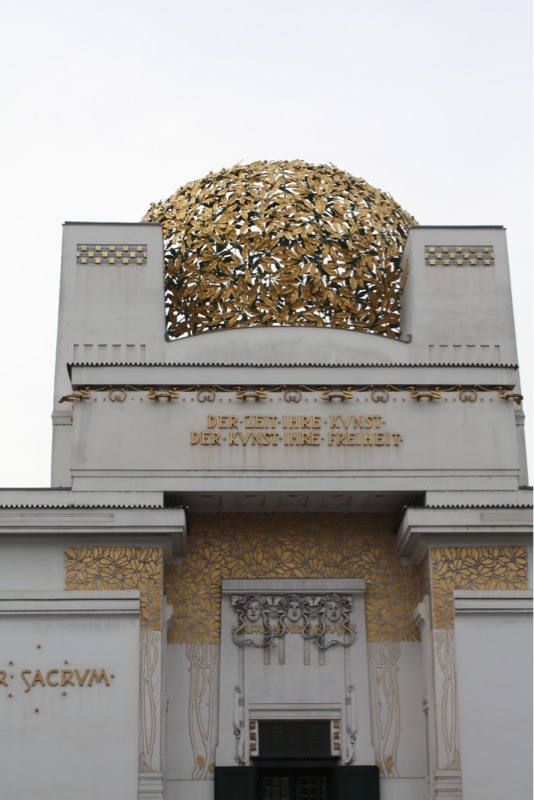 Saw the remnants of Klimpt’s Beethoven Frieze inside. Quite beautiful. From there we took a stroll through Art Nouveau and modernist Vienna. Matching pavilions by Otto Wagner in Karlsplatz were built as part of Vienna’s Stadtbahn railway network in 1898. 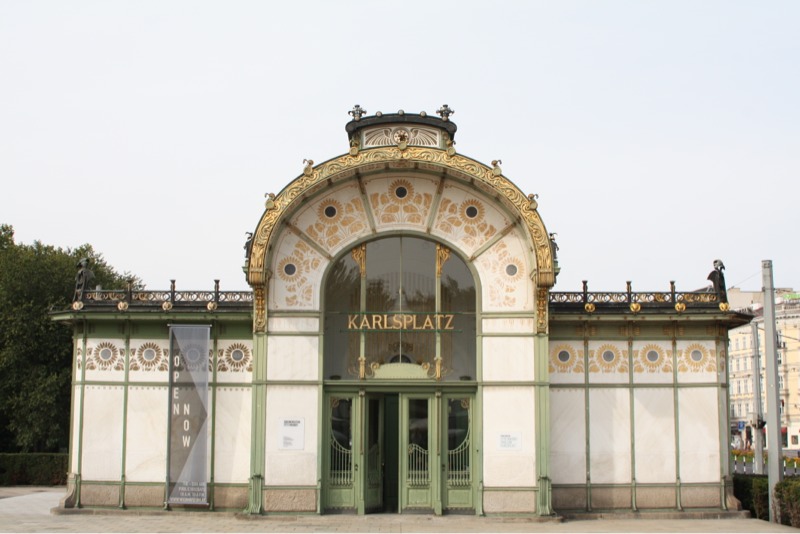 Then down Karntner Strasse to the famous American Bar which was designed in 1908 by Adolf Loos who did not believe in floral elements and other grandiloquent design features. We went back later and had a cocktail. Pictures were not permitted but here my Parisienne Martini is at the end of this blog. 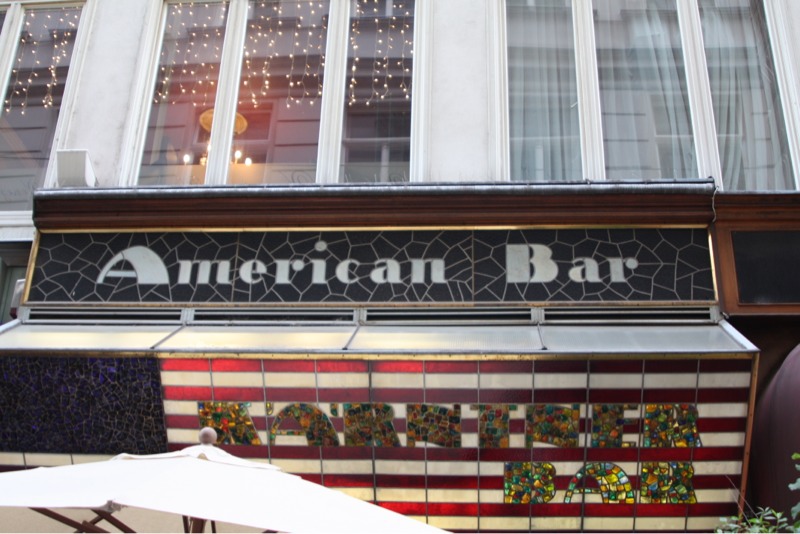 On we went to Graben 13, another designed by Loos, this time for gentlemen’s outfitters, Knize, the first men’s fashion label in modern Cienna – and still there. 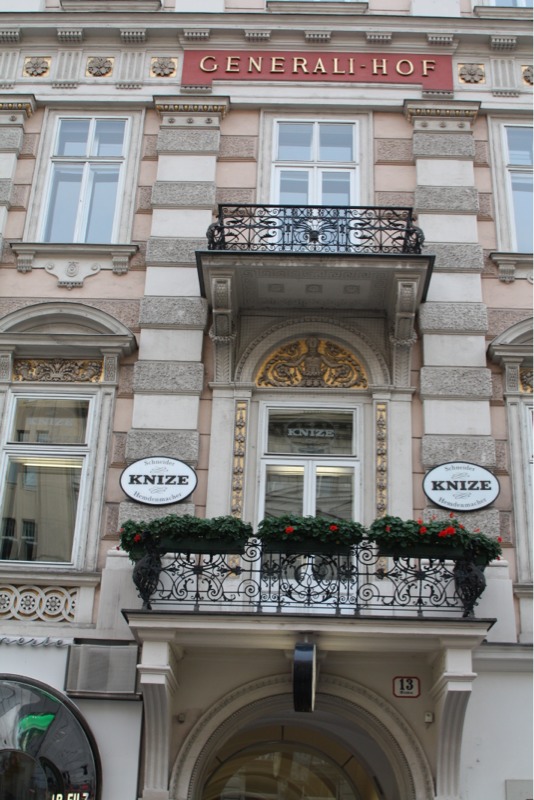 Around the corner, quite near our pensionen we found Artaria House designed by Max Fabiani. The first house in Vienna to have bay windows – and it has quite a lot of them. 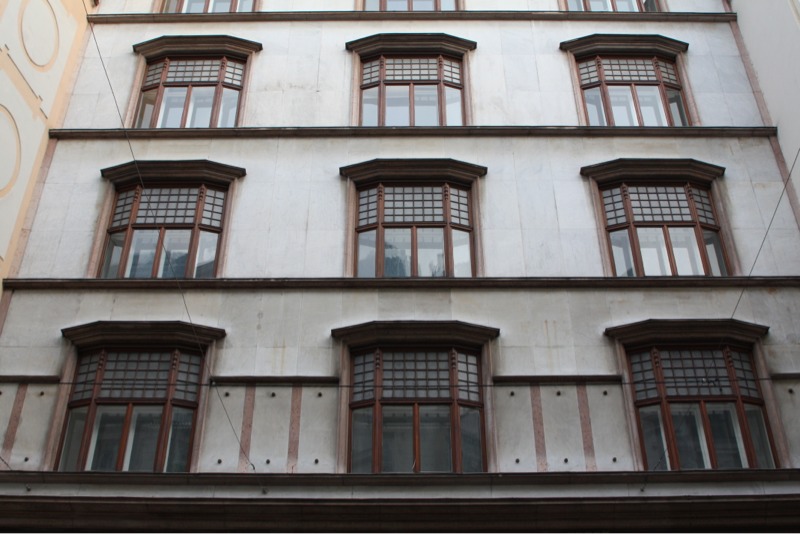 Impressive figures on either side of the facade which is clad in red marble – reminiscent of the Otto Wagner style. 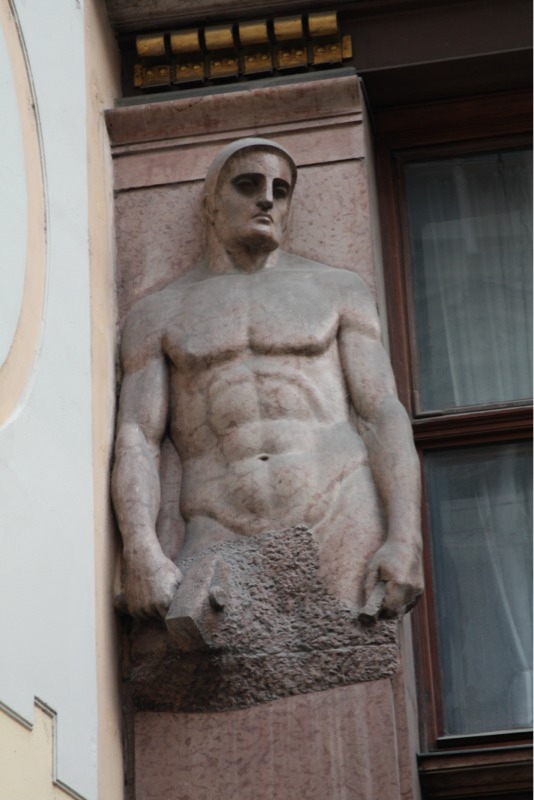 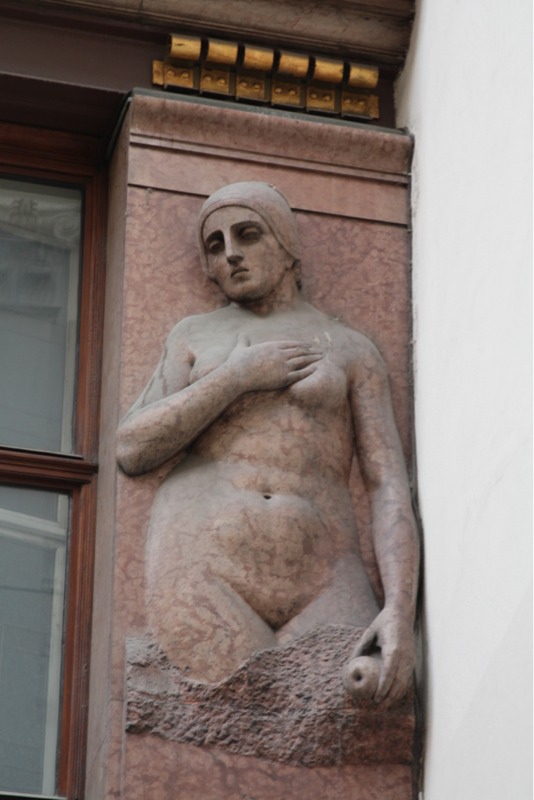 On we went, Joe guiding, to a place we had seen often while having coffee at the Cafe Greinsteidl which is just across the way. It is Adolf Loos most famous building and therefore called the Loos Haus. Caused a sensation when first built because of its lack of adornment. Used to house Goldman Sachs but now there is another bank in residence – wonder if GFC a factor in that. In any event, overlooking Michaelerplatz, quite lovely. 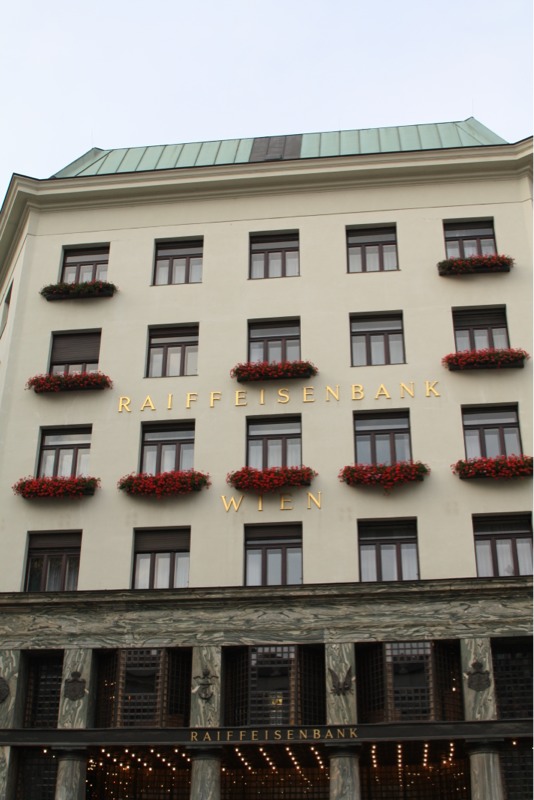 The next spot on our self-conducted tour was described as a must see Art Nouveau building. It was the Engel Apotheke. Designed by Oskar Laske, the facade features two angels which give the building it’s name. 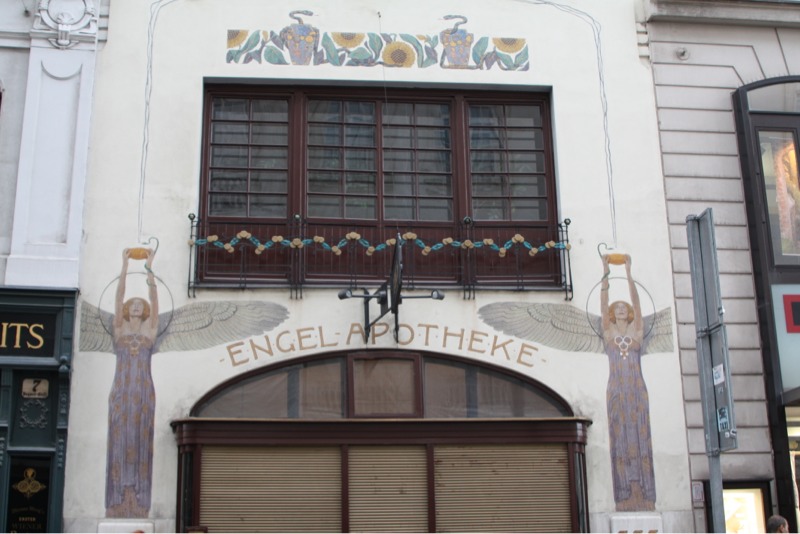 They are a lovely purple, grey and gold and the detail close up is great. 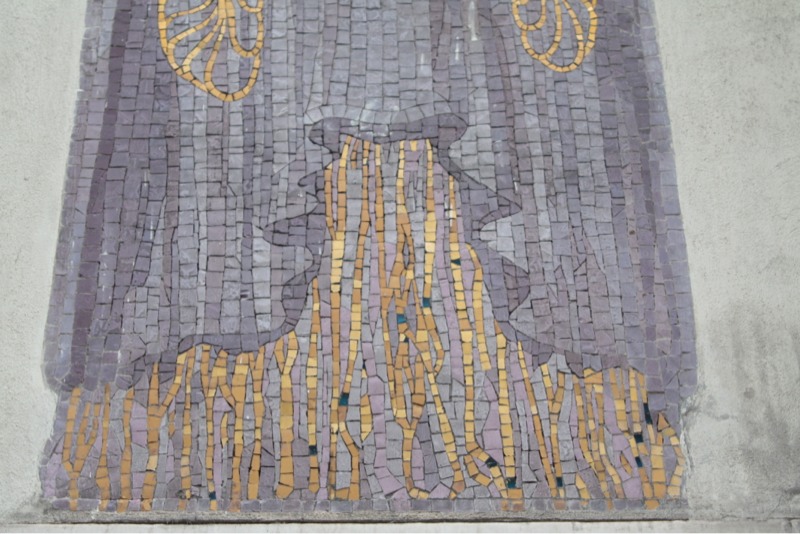 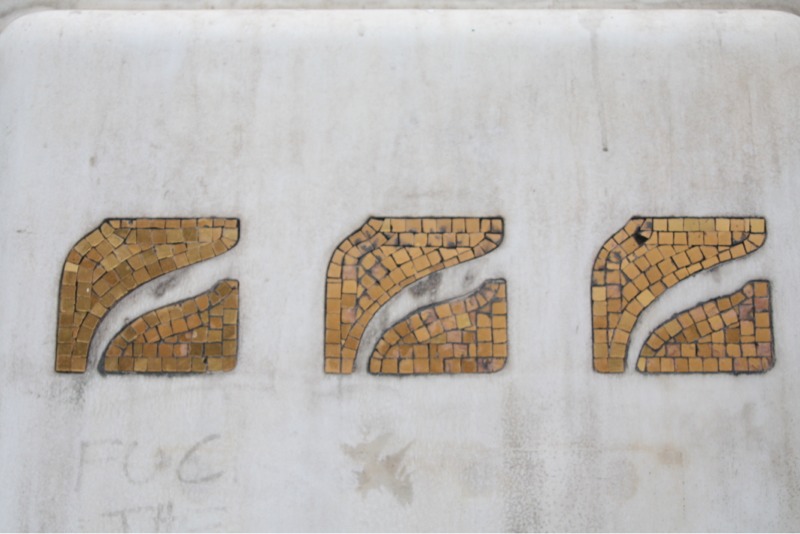 We had walked past this building a number of times. It’s on a pretty ordinary street. Just goes to show what you can miss when you are not really attending to what is around you. It was lovely. 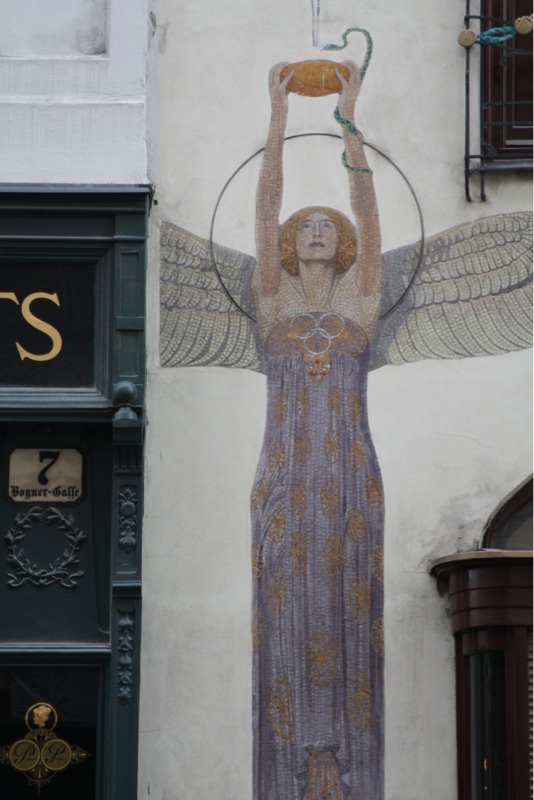 On we went through the gathering twilight, to something different. The Hohe Bridge over Tiefer Graben. This is a bridge that crosses over a street. There are two sets of stairs running up from the street below. The guide book says it is beautiful when illuminated at night. Even without illumination it looks good. Once again the detail is pretty. 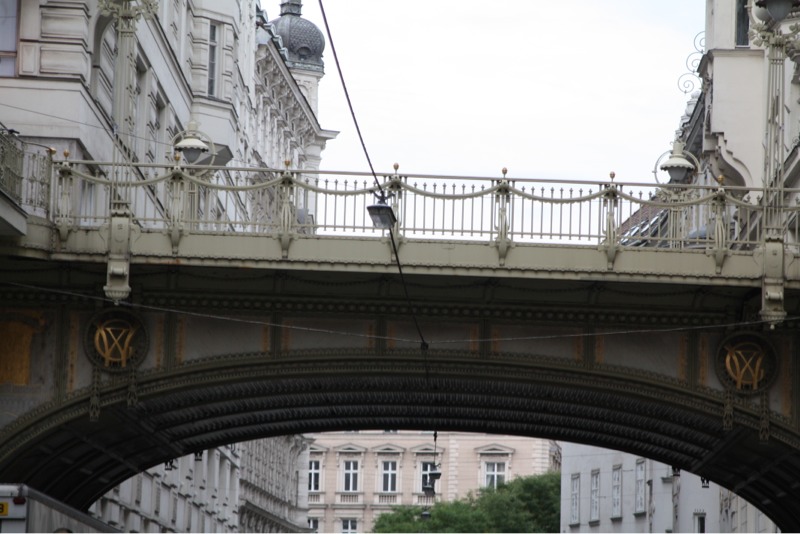 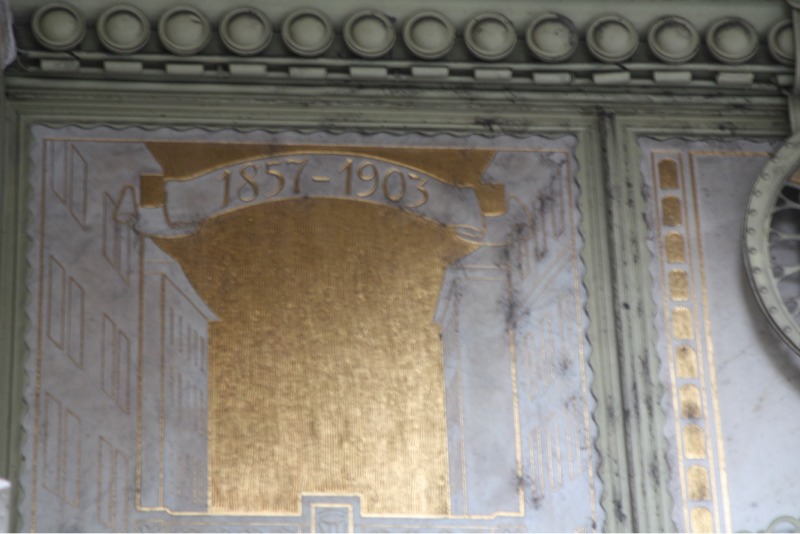 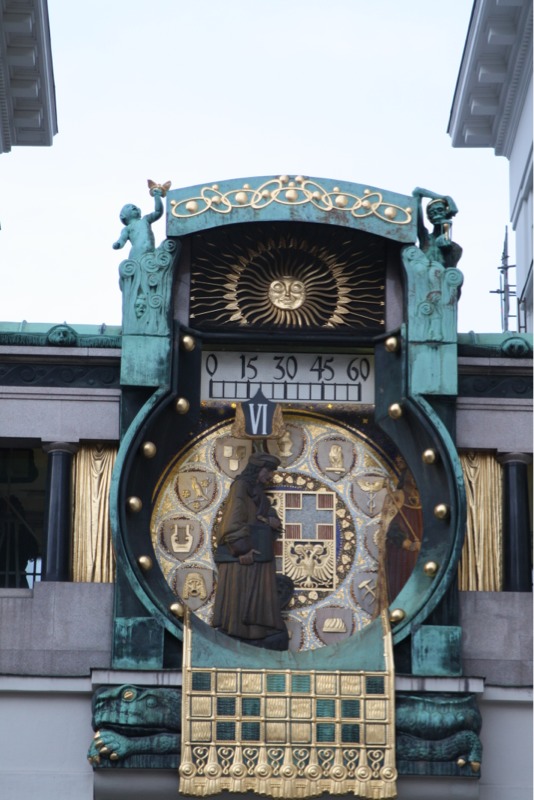 Just a little further on we found the Ankor Clock on Hoher Markt. This was designed by a painter, Franz Matsch and built between 1911 and 1914. It’s actually a bridge linking two buildings. 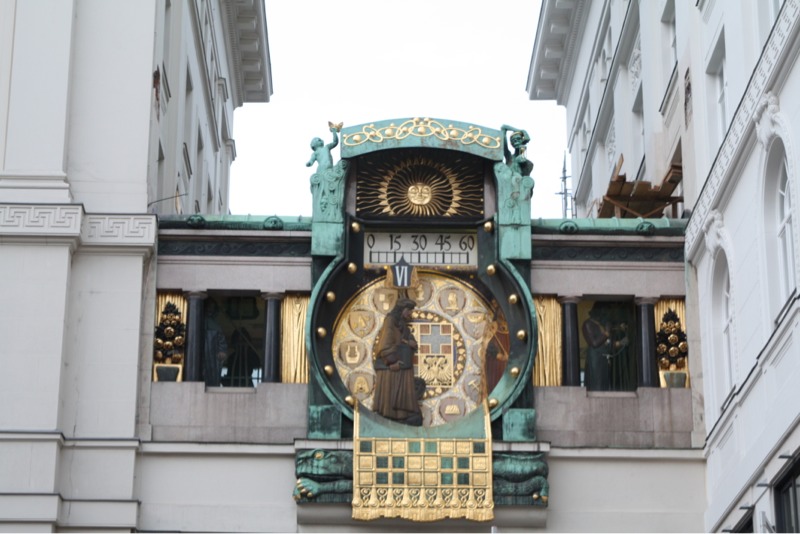 It is a novel way to tell the time. And is an object of great beauty. Lovely colours. Would be worth seeing at noon when twelve famous figures associated with Vienna appear to a musical accompaniment. Otherwise on the hour one figure appears. Finally we saw a building that is meant to be one of the leading examples of the Otto Wagner school. The Zacherlhaus was built for an industrialist by Josef Plecnik and its outstanding feature is a highly artistic cornice. But I thought the chap hanging outside was impressive. 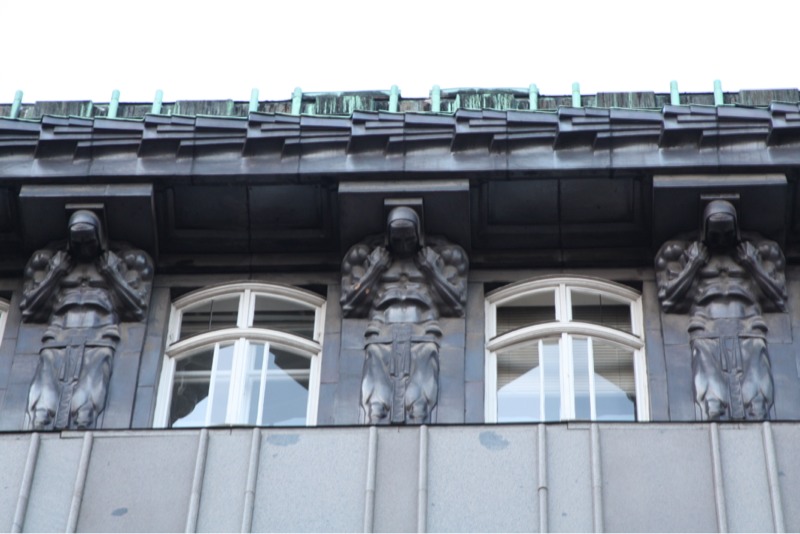 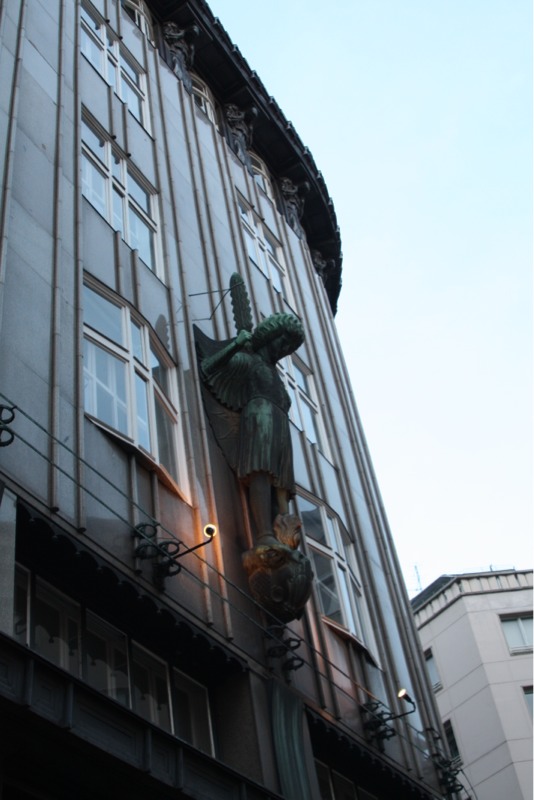 Then we took ourselves off to the American Bar for our martinis. Thoroughly deserved – it was a lengthy walk. We had a nice conversation with a woman from Munich. 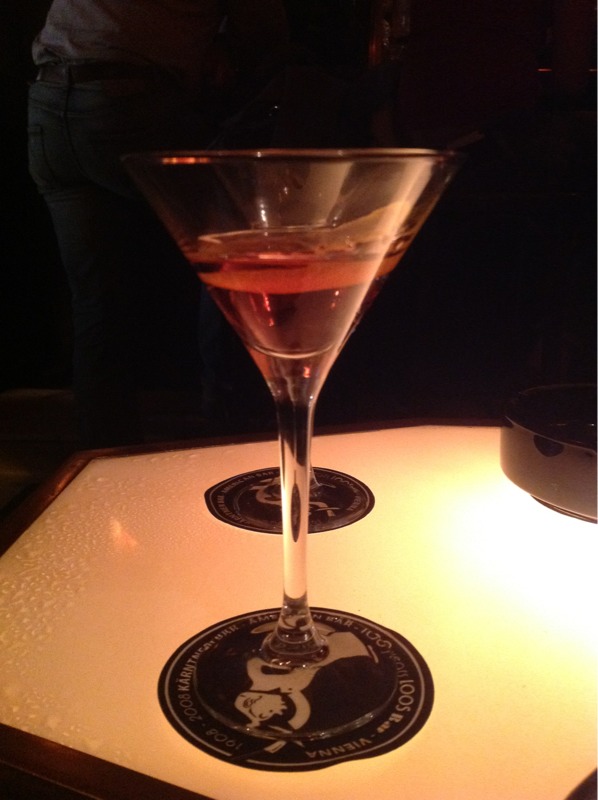