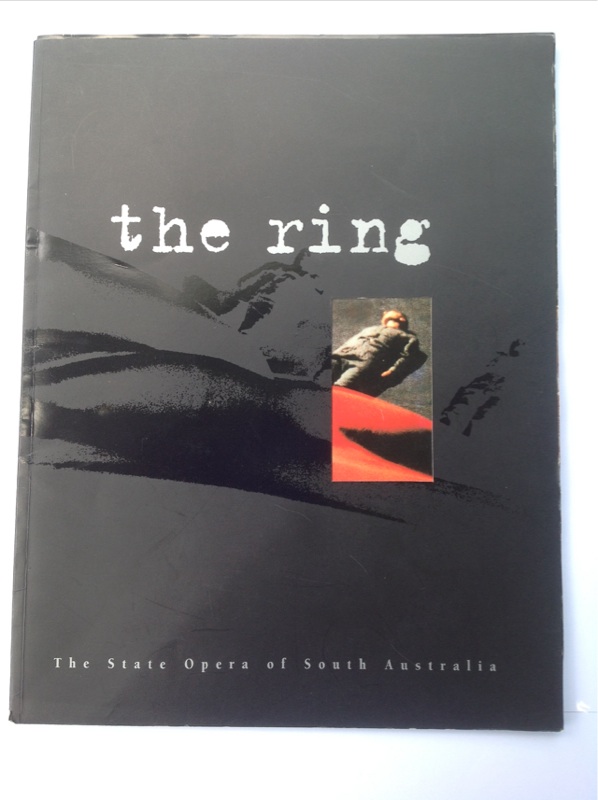 Second, the Elke Neidhardt directed Ring cycle, presented two years later than predicted, in 2004. This was the first all new production ever staged in Australia. 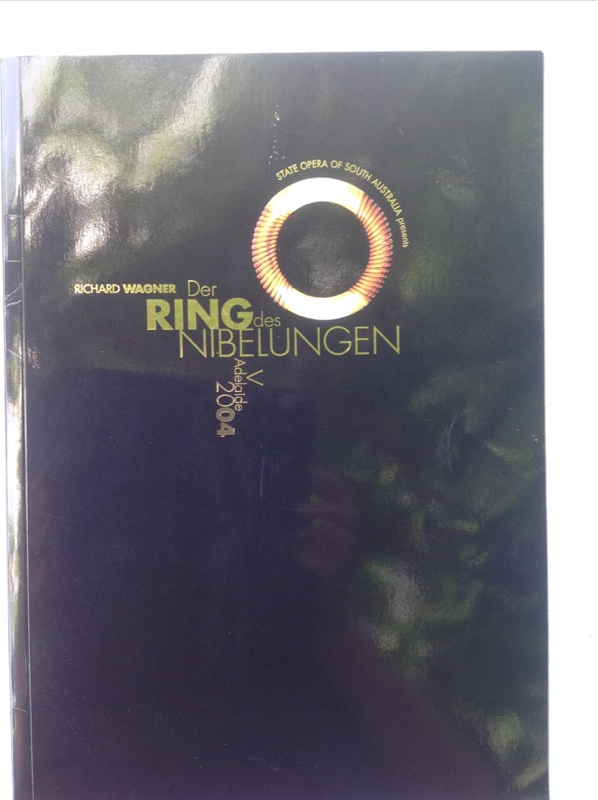 And now I’ve experienced one in my home town of Melbourne. Another wholly original, home-grown production directed by Neil Armfield 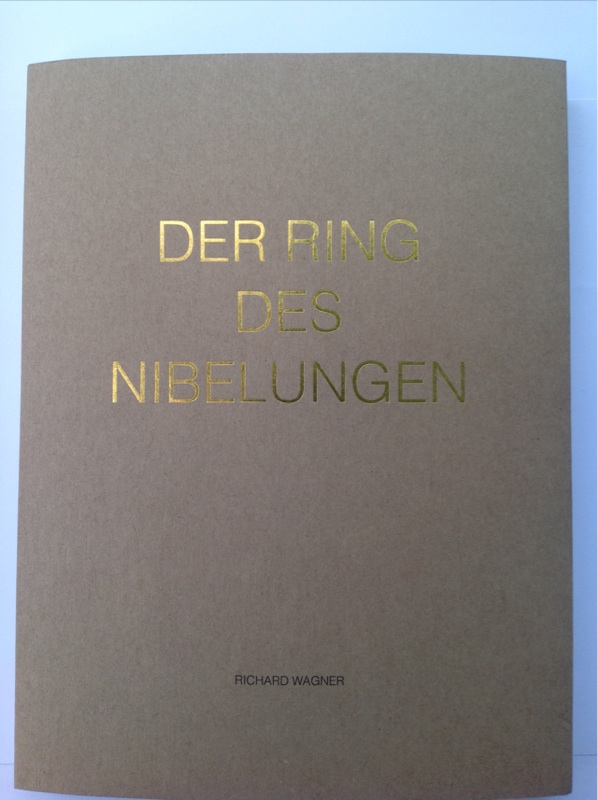 I hope we get another one here in the future. As happened in Adelaide plenty of people want it to happen, but getting a successful production up is hard. Melbourne will have to just wait and hope.

Of the three, my all-time favorite has been the first I experienced. I can find no trace of it on the internet. The year 1998 was early days for the Internet and there is nothing about it on Google or YouTube. Which is interesting. I especially loved the minimalist, severe look of it. John Wegner, who was wonderful as Wotan, said he had to unlearn everything he’d ever done in previous Wagnerian opera performances in order to play the part as required. He’s done lots of Flying Dutchmen before and since since and had played Wotan in the SSO performance of Die Walkure which I saw. He’d also been Wotan in a Karlsruhe recording of the full cycle. He has since done Alberich in the 2004 Adelaide Ring and was due to do that again in Melbourne but had to withdraw due to illness. I prefer him as Wotan. He looked terrific. Magisterial, all powerful. A suitably imposing plain costume, including the traditional patch over his lost eye. 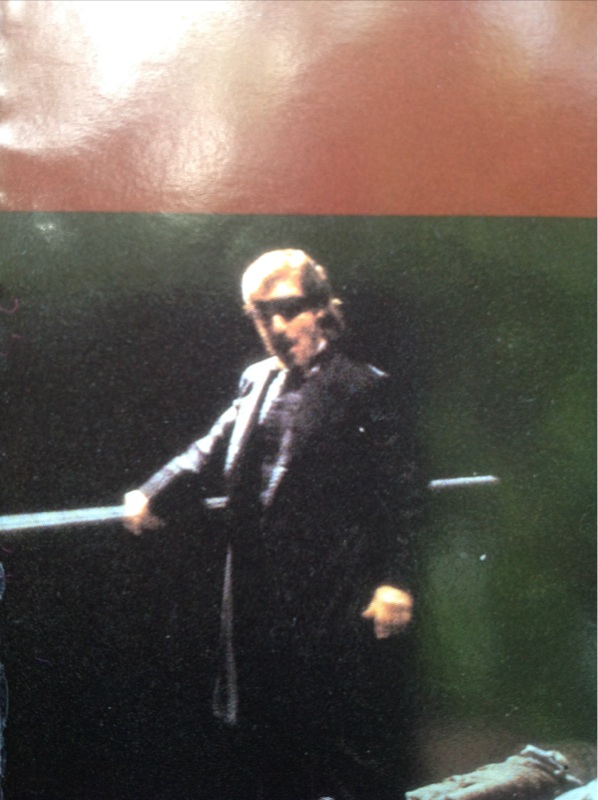 The Gods were all in Edwardian dress; one critic saying they looked as though they were preparing to go motoring. Here is Wotan with Fricka; Froh and Freia behind. 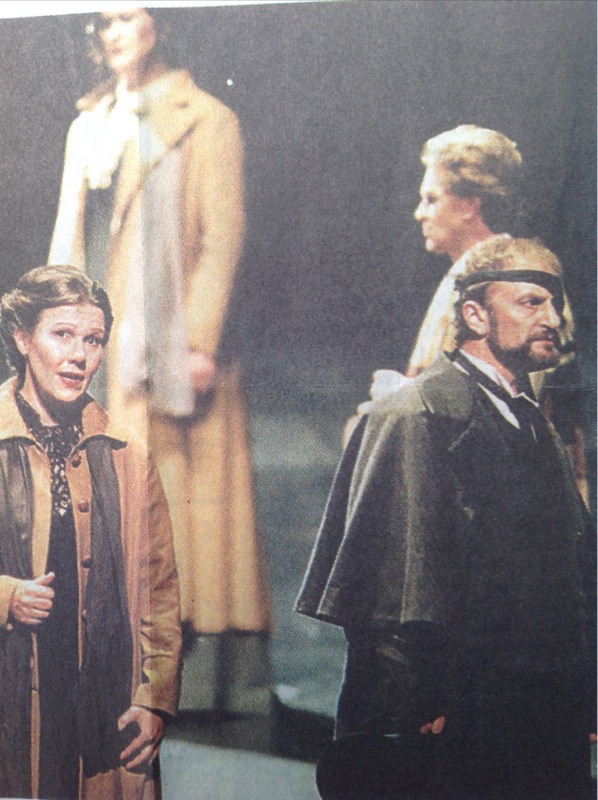 John Wegner’s voice was strong and powerful. Filled with emotion at key passages, although the critics thought he weakened towards the end. Here he is with Brunnhilde (Janis Martin), I think during their dialogue in the early part of Die Walkure. They were both wonderful in the beautiful Wotan’s Farewell. 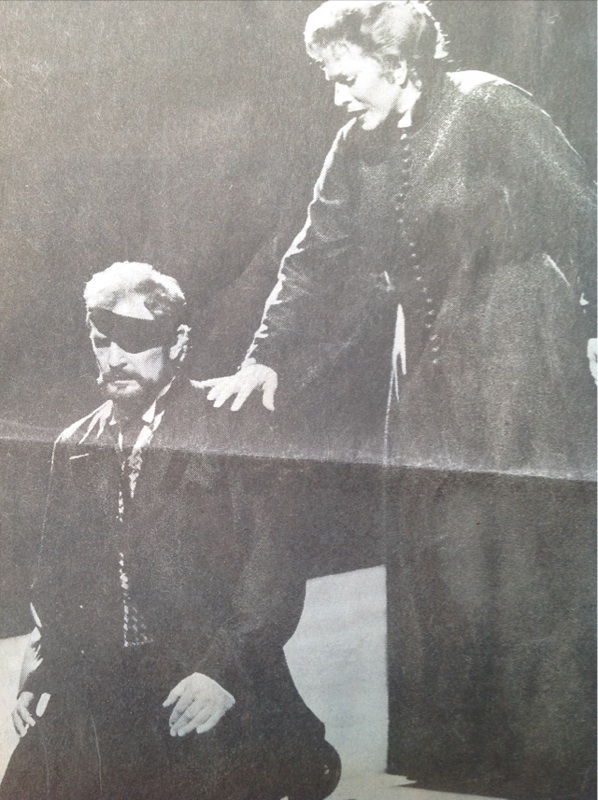 I also really liked Loge. Sung by Richard Berkeley-Steele, here he is, in his Edwardian motoring costume, in Das Rheingold. That’s Freia (Nicola Waite) in the background being measured against the Hoard. And one of those two Giants in their cloth caps was Warwick Fyfe who was the tender, lovelorn Fasolt. 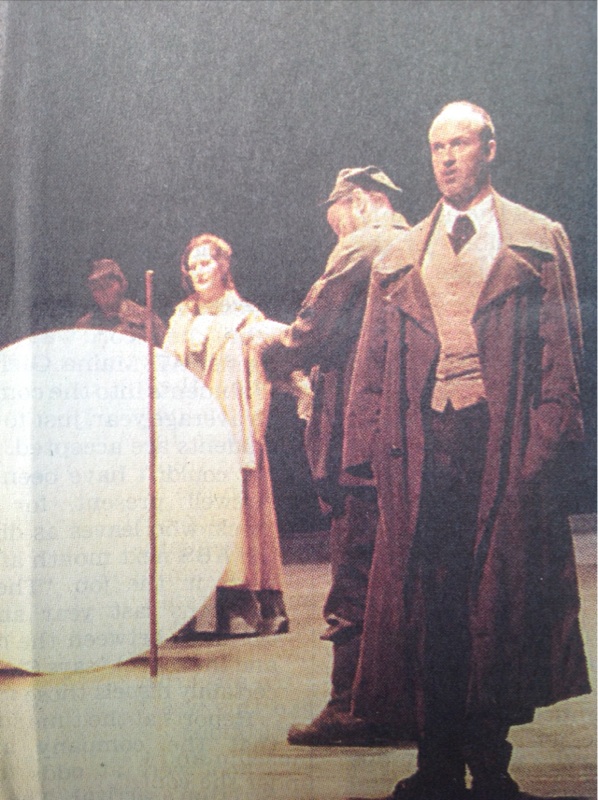 The Rhine Gold was a smaller shining ball when Alberich (Malcolm Donnelly) snatched it from the Rhinemaidens. 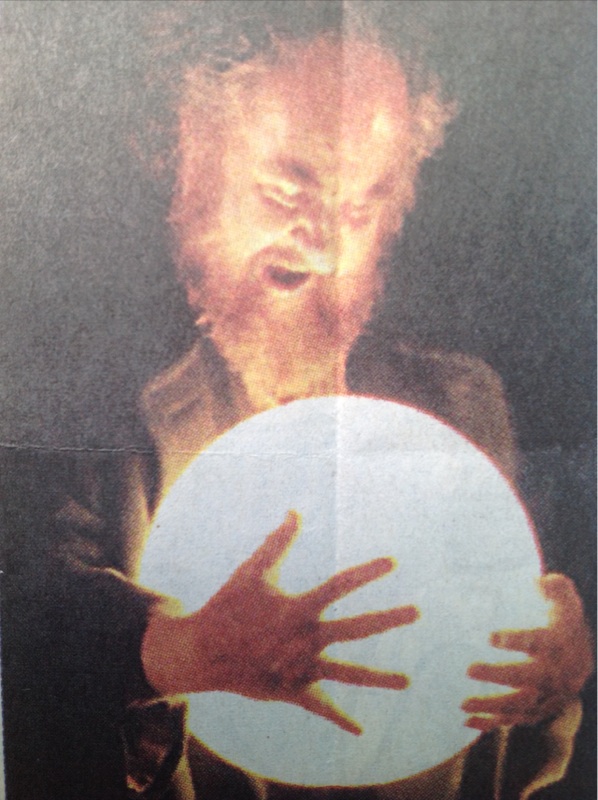 In this minimalist production, the silver orb, first small, then large, was one of the few visual props. But an effective one. Here it is again in the scene where Wotan (now with his hat – but fully clothed unlike in Melbourne) challenges Mime to ask and answer his three questions. They are outside Fafner’s cave. 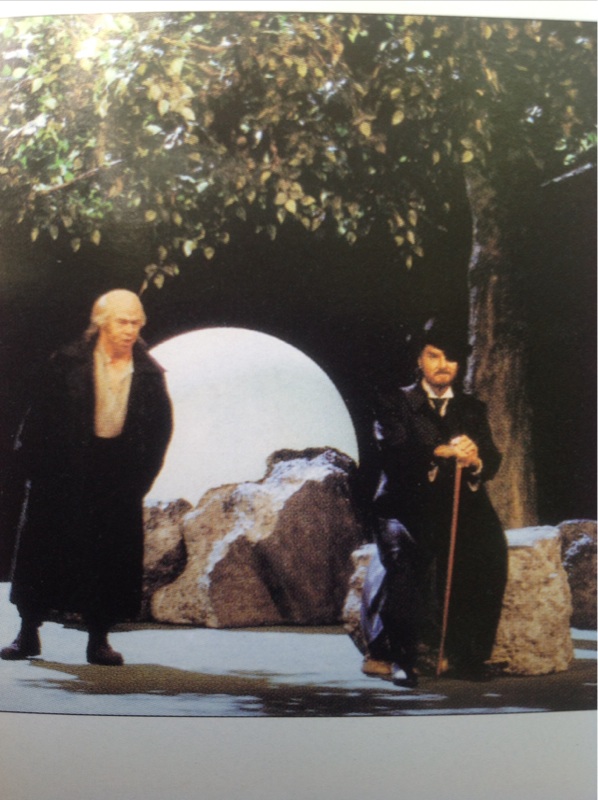 I have no recollection of the transformation scene, the critics described it as underwhelming, the dragon apparently some sort of fan. But Alberich looked good in the Tarnhelm. 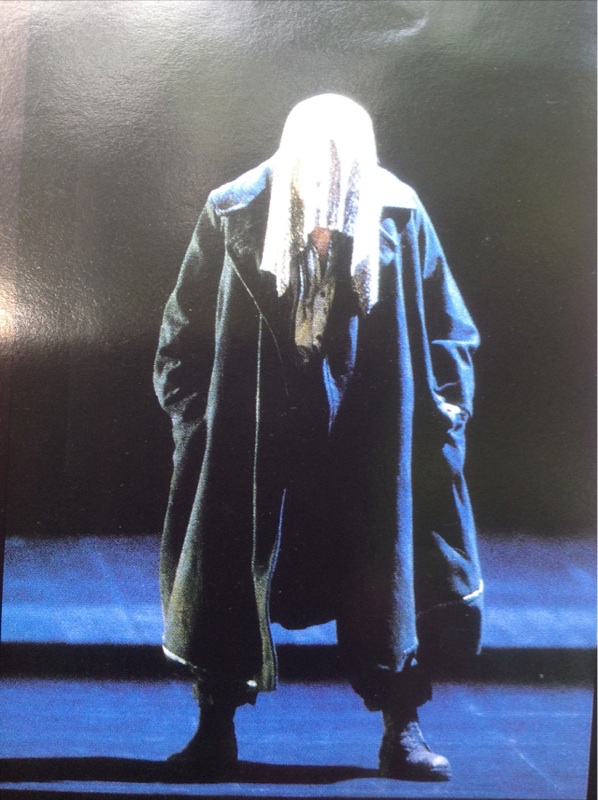 And I loved the look of the Valkyries – all very austere in long navy robes and silver rods – as they dragged their dead heroes across the stage. 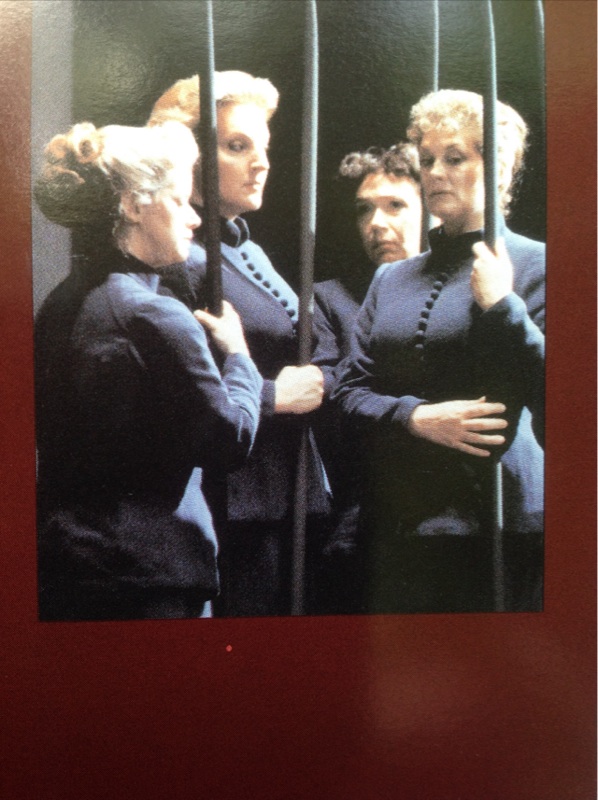 The most frustrating thing about this production was the portrayal of the lovers in Die Walkure. Individually they were fine but Siegmunde (John Keyes) and Seiglinde (Claire Primrose) made no eye contact during the first Act of Die Walkure which seemed perverse to say the least given they were swearing undying love. Erda (Liane Keegan) as a bag lady worked well. Her reappearance in Seigfried where she shared a park bench with Wotan as he comes to the realization all is lost was heart rending. Siegfried (Edward Cook) was disappointing which has a pretty big impact on this opera in the cycle. Nor do I recall much of Götterdämmerung . Most of it was performed on a bare stage. However Hagen performed by Daniel Sumegi (as in Melbourne) was terrific, full of suppressed menace. Here he is murdering Seigfried (much more compelling with a spear than, as in Melbourne, with a pistol). 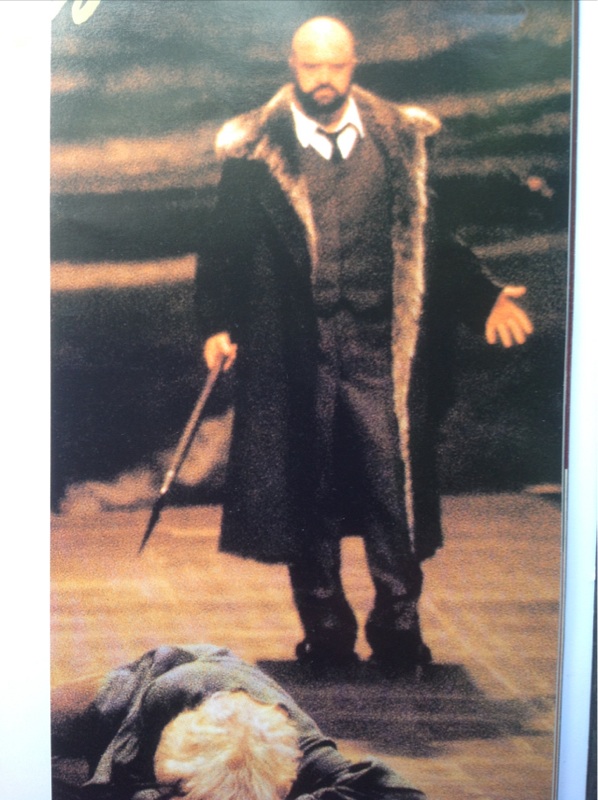 The big production number in this production was the wooden wall that sprang up at the end of Das Rheingold to represent Valhalla. This then dramatically collapsed at the final immolation scene. This suited the spareness of the production. The overwhelming sensation was of repressed emotion in all of the characters, but especially Wotan and his heroic aspirations. The minimalist setting and severe costumes all leant a nobility to the pursuit of power, adherence to the rule of law, personal freedom, revenge and the eventual triumph of love. The sense of high ideals thwarted by the all too human weakness of wanting to have it all were manifest in the production. There wasn’t a wasted movement. Wotan’s head dropping to his shoulders after Seigfried broke his sword asunder remains one of the most poignant theatrical moments of my life. The essential existentialist drama of it all – How can the God be free? left a lasting impression on me.

My second Ring remains my second best experience. It was sad to hear of Elke Neidhardt’s death just before the second cycle of the Melbourne Ring started and it was fitting that the performances were dedicated to her. 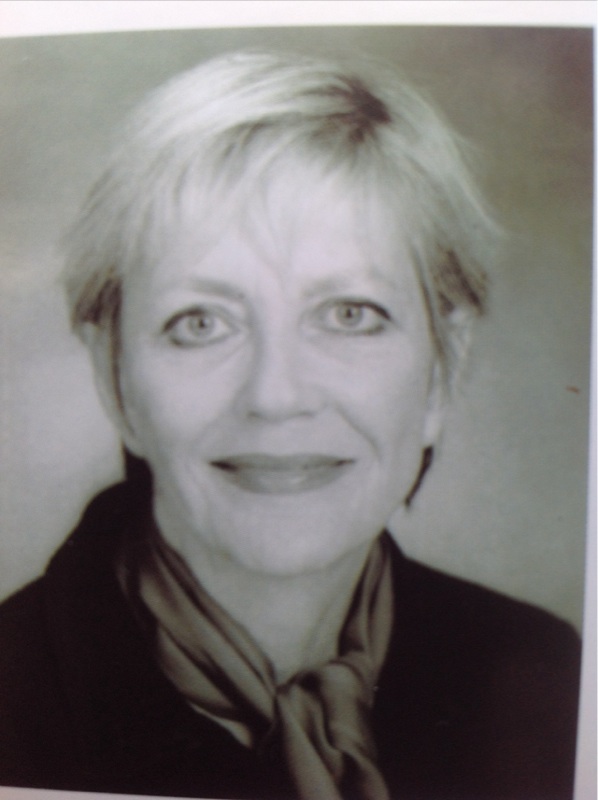 Her’s was a great visual experience – a fully realised, consistent vision across all four works. Startling costuming and sets created a wonderful other world of Gods, Giants, Nibelung and Gibechungs. From the start the audience was entranced by the glassy stage and super terrestrial looking Gods. Fricka (Elizabeth Campbell) and Wotan (John Brocheler) are here, regal and imperious in their white outfits (though there’s something of the Shaman about Wotan’s). 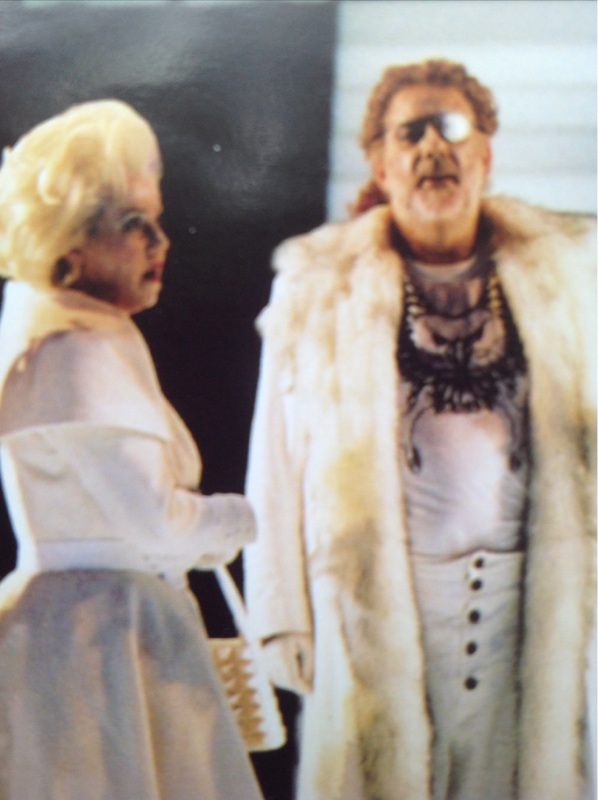 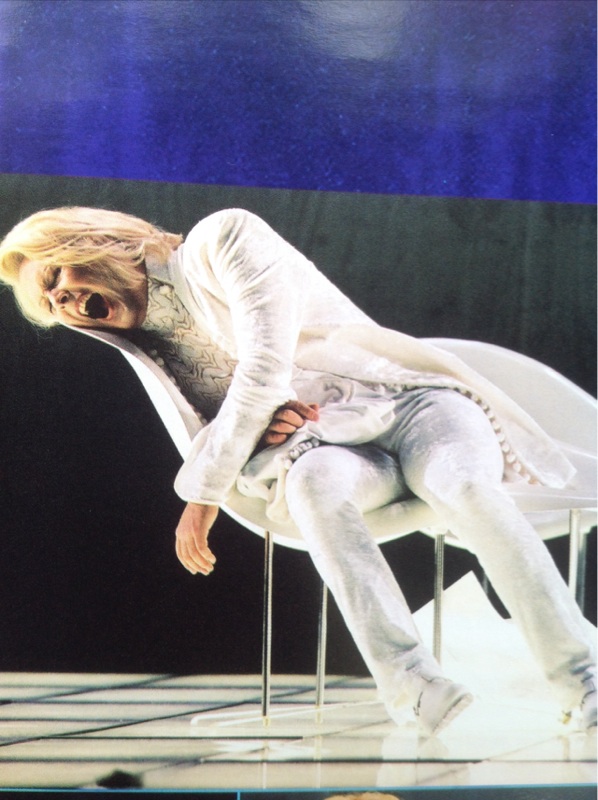 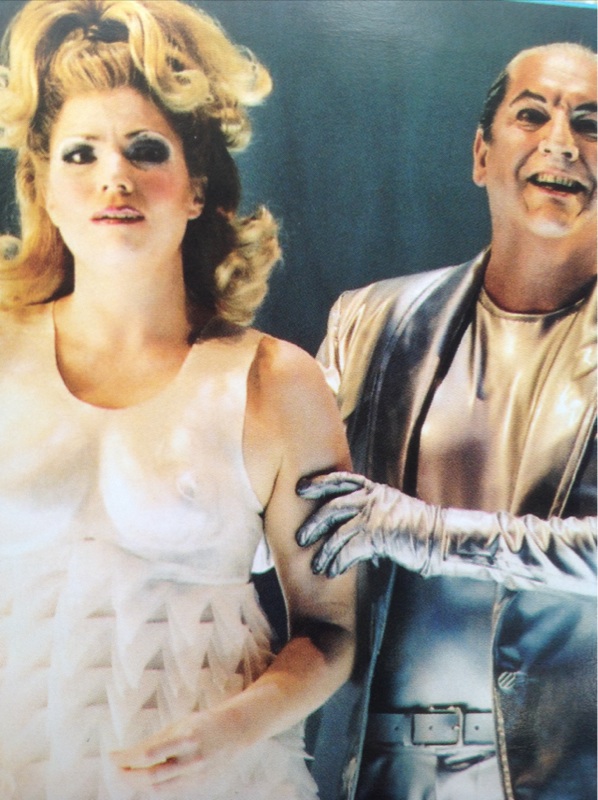 And Freia (Kate Ladner), here with Loge (Christopher Doig). John Wegner was also back, but this time as a malevolent Alberich. 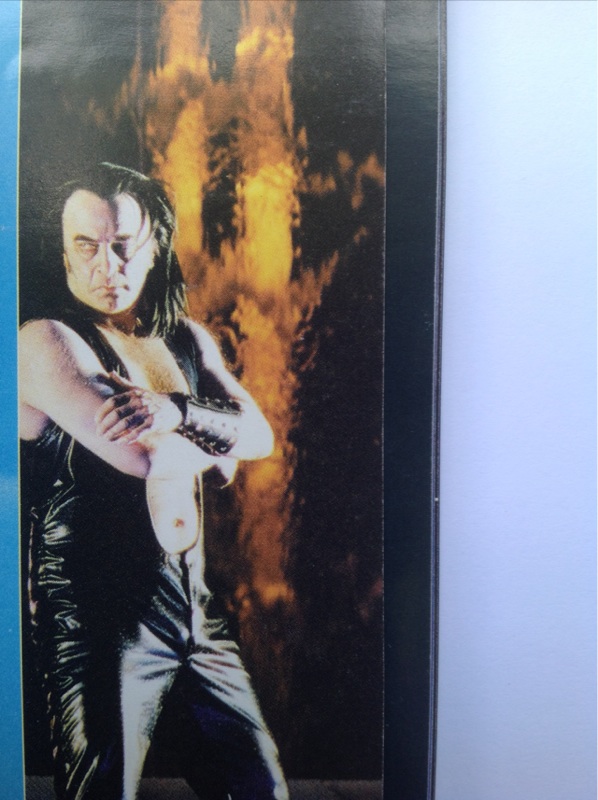 The Giants were gigantic construction workers in yellow safety vests and overalls and hard leather gloves. Straight off their building site. Here’s Fasolt (Andrew Collis) (I think). The Rhinemaidens were in brightly coloured wetsuits – aquatic swimmers lamenting their lost gold. 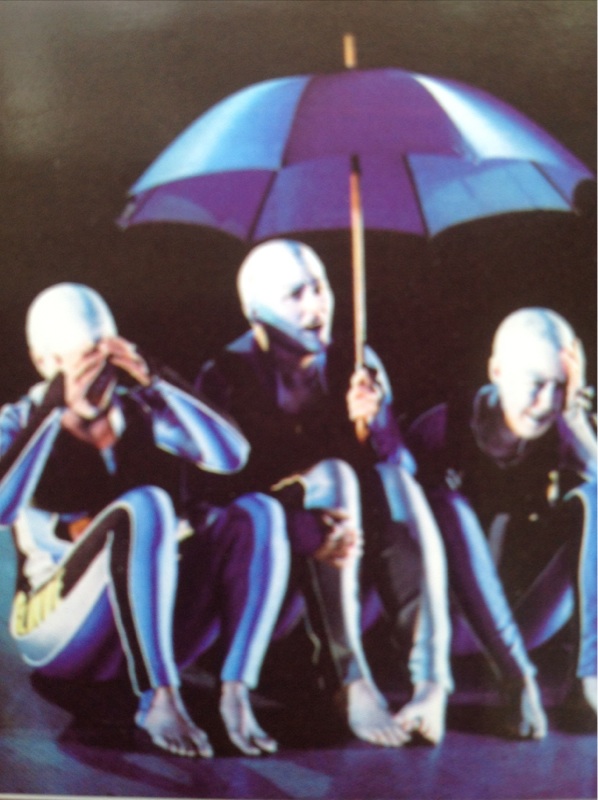 These exotic costumes were matched by those of the Valkyries, flamboyant, hard drinking bikies hanging out at their local, the WunderBar. Great, great sets. Here’s Wotan in the WunderBar. Memorable. 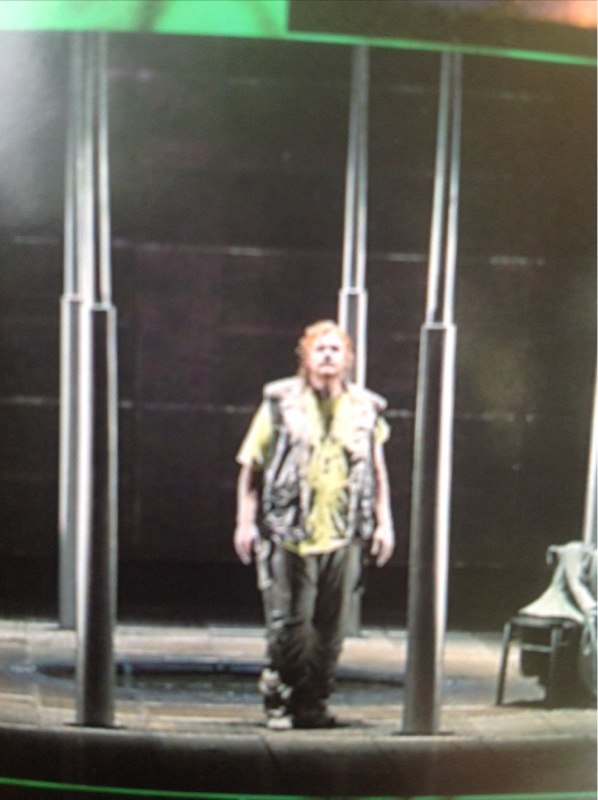 The set in Die Walkure was spartan. Hunding’s hut, controversially, was a ring of steel poles. I loved it. Siegmund (Stuart Skelton) was wonderful. Brave and vulnerable in equal measure and great voice. Seiglinde (DeborahRiedel) was also terrific. They all had bright red hair – indicating their common lineage – Wotan, Brunnhilde, Siegmund and Seiglinde. No mucking around with the love scenes in this version

In Götterdämmerung the set was equally memorable. Stark dramatic red geometrical beams representing the Hall of the Gibechungs. This was a visually arresting Ring. 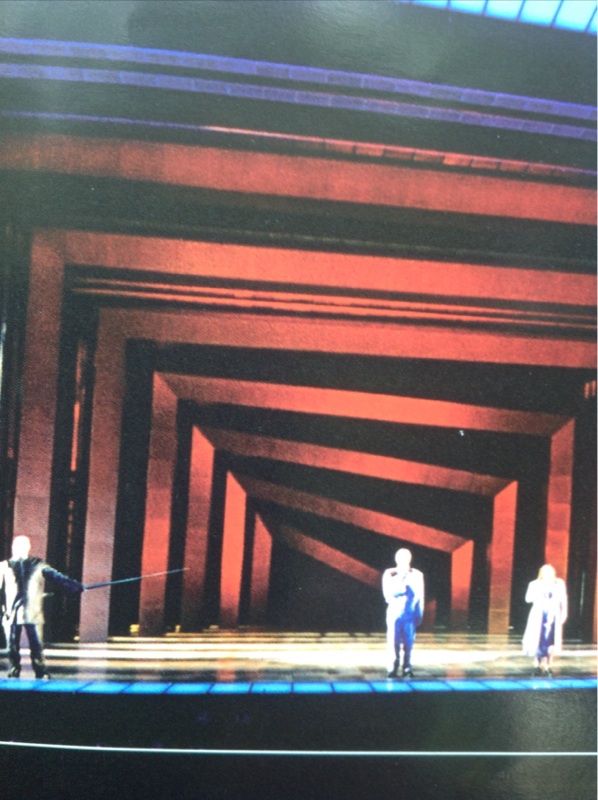 The best performer in this Ring was Lisa Gasteen – a memorable Brunnhilde. When she walked into restaurants in Adelaide during the performance the patrons stood and clapped her. Here she is swearing undying love to Seigfried. Who was meant to be Timothy Mussard but he was replaced and I can’t remember by whom. 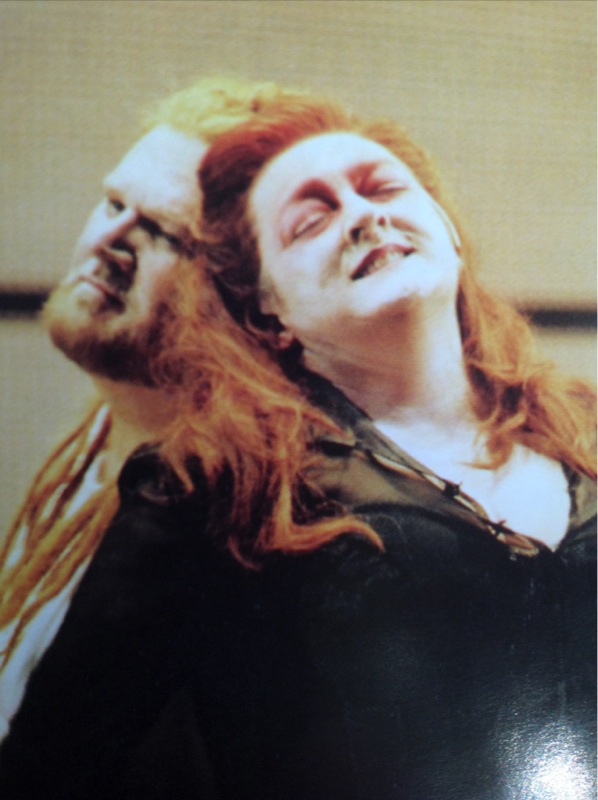 Brunnhilde’s rock was one of the big production moments as first lay on a disc within a circle around which real fire was ignited at Wotan’s command. After which the disc she was lying on was slowly raised – a dramatic and emotionally satisfying moment. 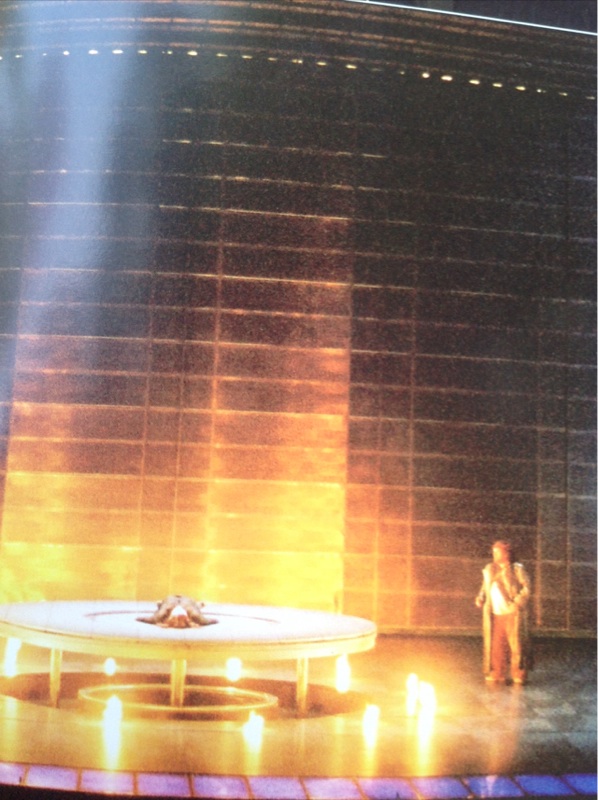 In Götterdämmerung Lisa was again wonderful as the wronged lover – looking the part and singing with incredible depth and power. Here she is confronting Seigfried at the Gibechung Hall. Her amazement and anger a wonder to behold. Her later swearing of vengeance against Seigfried, in league with Hagen is shocking. Duccio dal Monte as Hagen looked terrific and sang well. In the final scene, as Brunnhilde is prepairing the funeral pyre, Seigfried’s hand rises mysteriously to fend off Hagen’s attempt to seize the ring. I liked Seigfried lying on his funeral pallet. Suitable funereal. Fantastic finale. I have written separately about the Melbourne Ring directed by Neil Armfield. And the programme contains no pictures for me to reproduce here. I think this cycle had the best music of the three that I have seen. It was played by what was called the Melbourne Ring Orchestra – 135 musicians from Orchestra Victoria and guest players from nine other orchestras. Wonderful sound. Although I felt at key moments too much action on stage distracted from the music.

I finally experienced, in a live performance, a great Siegfried in Stefan Vinke. Here is a review of his performance in a production of Seigfried in Seattle. I had read this before seeing him in Melbourne and was a little anxious he might not live up to my resultant expectations – but he did, and then some. A wonderful performance.

It was lovely to see Stuart Skelton again as Seigmund. And good to see him acclaimed internationally as one of the best performers in this role, in demand all over the world. Here is an interview with him. Another great performance.

I also loved Daniel Sumegi for a second time in the role of Hagen. He’s also been in Seattle – it’s a small Wagnerian world! Here’s some background.

It was also great to see Warwick Fyfe relish being Alberich. His performance was a stand-out of this production. Although I’ll always remember his beatiful, sensitive Fasolt in my first Ring. Jacqueline Dark was a wonderful Fricka giving me a new appreciation of this role. And Miriam Gordon Stewart brought both sensitivity and power to the role of Seiglinde. I think this Ring had the best realised Die Walkure of the three I’ve seen as part of a cycle and the one I’ve seen separately.

About this cycle as a whole I am more ambivalent. It’s been described to me as an adult pantomime interspersed with high Germanic gothic. Seems accurate enough. It’s production highlight was the depiction of Fafner’s death. There were thrilling elements throughout, but these were moments rather than steps building to an emotional and dramatic pitch. There was neither an overall look or vision as seen in both of the two Adelaide productions.

Nevertheless it’s been a great experience to see three different performances of Wagner’s great festival of musical dramas as he meant them to be staged. A week of immersion in Wagner’s music and ideas. And to be able to sit back now and compare performances, artistic interpretations and musical achievements. I can’t wait to see another!