Eleanor is a Force of Nature. She showed this when she entered the world – coming early – 2 weeks before her due date – she was meant to be an April baby, about now in fact. But she came on the 20th of March. There were fireworks in the city – marking the end of Moomba. Appropriate. She also arrived quickly – in 2&1/2 hours – our doctor nearly missed it. So there you have it early and quick. Impatient and enthusiastic – eager to experience everything on offer. And so she has continued. Quick to sit up, to walk, to talk – trying to catch up with her brother. Who despite dire predictions from some that he’d try and smother her! was always happy to have her around. She was just as keen to get out of home and join him at crèche, kinder and school. She was always one of the youngest in her year wherever she went. This never stopped her joining in and leading things. From the time she and Esther played the Christmas tree at their kinder concert she’s loved performing and dancing – we – and here I include Nanna and Terry – have been to a lot of great shows. She’s thrown herself into sports wherever she goes. I’ll never forget her surprise at winning her first swimming race – it was backstroke and she kept going until she bumped her head hard – not looking up gave her the race! While basketball has been her main game she’ll have a go at anything. With Robbo’s support she even got to the State championships in shotput – that was a surprise! She’s always loved organising things – and bossing us all about! School socials (and after parties) and now university balls and beauty concerts – the latest being the Mr B&G. She’s taken up every opportunity that’s presented itself to her. Racing off to Italy when she was 15 – I look back and think ‘how did we let her go?’ The answer is of course because she is so capable and confident. How can anyone refuse her. She wins the confidence of teachers and classmates, friends and family and takes us with her. Later this year she’s off to Canada on exchange. She’s still rushing headlong into everything life has to offer and I expect she will continue to do so all her life.

As you all know she’s Fiercely Independent. Again, this started at birth. She showed us she was going to do things her way. By being born bottom first. Joe still remembers that first glimpse – quite a sight – her legs up about her ears. We knew then she was Miss Independence. I’ve always admired her teachers – including at different times her father and brother (I’ve never tried) – she doesn’t take kindly to instructions! She likes to do things her way – thank you very much – which is mostly okay because her way is usually pretty good. She always chose what she was going to wear. For a whole year she got around in a shiny gold skirt over black pants. And she had a green necklace that she wore daily for a long time. I couldn’t get her out of runners. There were tears every time I tried to get her into girly party shoes – she hated them. I’ve never been back Myer’s shoe department since our last time there – ten years ago. I think she’s moved along a little in that department – prepared to trade off a bit of comfort for a nice pair of high heels! Her independence of spirit applies to serious things as well. She’s always been able to think for herself. Often at school she spoke up about things she felt were wrong. Like opposing rules about running in the playground, having a thoughtful response to ‘girls on the oval’ days at primary school, protesting about taking the new building off the Year 12s at high school! I always admired her coming up with the term manslut when she realised the term slut was only used about girls. She’ll stand up for what she believes by demonstrating – against university fees, for better treatment of refugees. She calls cant and hypocrisy for what it is. She argues passionately for her corner. And will keep doing so I’m sure.

She’s always been a Glass Half Full Girl with a really positive outlook on life. I thought Joe had a cliched, romantic view about children when he told me how great it would be walking along a street holding your own child by the hand. But with Eleanor the cliche came true. I used to love walking alongside her when she was a little girl – going to and from crèche, kinder and school. Because she didn’t actually just walk. She’d skip. So going anywhere with her on foot – which I always did – always lifted my spirits. It’s hard to be even a tiny bit down, let alone cross or moody with a little person skipping alongside you. And she always did! She’s always positive – about everything. As she says ‘there’s no point dwelling on the negative’. And there’s not, but most of us spend quite a bit of time doing just that. Eleanor less than most. She always looks for the positive in people, in her circumstances and in any situation she comes across. To my mind she’s still skipping through life – metaphorically if not still physically.

She’s always valued her Friends. You all know how she loves the TV show! She’s intent on making life one long episode. I remember a friend of mine coming to one of her parties when she was about four. Eleanor is holding court at a table of about eight little friends – some of whom are here tonight. Eleanor waved her arm to include the table and said “These are my friends Fran”. It’s the tone I remember, the pride and pleasure she had in showing off her friends. She’s always made friends easily – because she is intensely interested in people and is happy to share something of herself – so she makes connections. And while she keeps her old friends close, she’s always welcomed new ones. It’s great to see so many of you here celebrating with her tonight. Some from all those years ago at Clifton Co-Op, others from Fitzroy North primary school, from Fitzroy High and others from ANU. Let me assure you, once you are a friend you’re a friend for life. Mind you she has high expectations of you – but she returns that in spades. She’s a loyal friend and devotes a lot of time to thinking about you all, the issues you are facing, what sort of advice she should give you, how she can be there for you. She cares about you all. As she does for her family. At Bennett Street Eleanor is the one who knows all the ages and birthdays, who knows exactly the right present to get. While she’s the furthest away – along with Nick on the Doran side – she stays in touch. So stay true to your characters and plot lines because this episode of Real Life Friends has a long way to go!

There’s much more I could say. About her vivid imagination – she was once convinced she felt the Easter Bunny’s paw when he left her an egg! About her love of American sitcoms – ask her a question about Greys Anatomyor How I Met Your Mother! She knows all the plot lines and most of the dialogue. And she’s becoming quite the film buff and getting into cooking. The future will hold more challenges – and she’s up to them all.

But there are more speeches to come so that’s all from me. 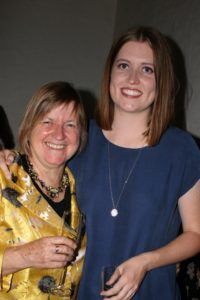 [This is a speech given at Eleanor’s 21st birthday celebration, Saturday 11th April.]

– Posted using BlogPress from my iPad