We set off to see Melbourne Opera’s Tristan and Isolde on Monday 5 February 2018 with some trepidation after the first performance on Friday 2 February was cancelled because soprano Lee Abrahmsen was ill. Would she be well enough tonight?! Or would there be another late notice calling it all off? It’s a big thing to cancel a performance, especially one of only three, so it must have been serious. These were my thoughts on the hour long tram trip from North Fitzroy out to the Palais in St Kilda. I needn’t have worried; the show went on. And it was wonderful.

I’ve always been a bit sniffy about Tristan and Isolde, despite loving Wagner’s music. For me an opera has to have a story that is emotionally and psychologically true alongside beautiful music. I’ve always loved this music; who wouldn’t? It’s glorious. But I’ve always been a bit put off by the magic love potion hoopla. This is despite knowing that the potion is merely a device that releases the lovers’ real desires.

I’ve only seen it once before. This was Opera Australia’s acclaimed production for which Lisa Gasteen won a Helpmann award in 2002. Maybe I was too far away at the Sydney Opera House. The production was notable for both Gasteen’s performance and the staging which consisted of a lot of water over which a sail wavered. I remember it mostly for the performers’ awkwardness navigating the small walkways around which they moved. In contrast, this year’s production by the Melbourne Opera really resonated with me. I loved everything about it.

The minimal, simple staging was completely right for making the story clear to the audience; no easy task in this very cerebral opera. The stage was cut in half so that we could see above deck the helsman steering his rudder to convey the Irish Princess, Isolde, across the sea to the waiting Cornish King Marke. A video backdrop of the teeming sea told us where we were. At the same time we could watch the action below deck. Isolde in despair, raging about Tristan’s betrayal and finally telling her maid Brangwane (and us) the whole story. When Tristan is finally prevailed upon to grant Isolde the audience she has requested, on her terms, the encounter is suitably intense. As shown in this photo. You can see Brangwane in the background mixing the poison/love potion.

All of the costumes were as required and expected; except for Brangwane who initially looked a little out of step with the Celtic look. Isolde’s beautiful capes were a highlight. The acting was uniformly good. The potion drinking scene was stunning; both Isolde and Tristan expecting to die. Brangwane aware that disaster beckoned. From there the action rollicked along. I felt the love scenes were all fine and the chemistry between the two leads completely believable. Here they are together on the night of the hunt in a sea cave instead of a garden, as shown on the video backdrop, which was a tiny bit distracting as water trickled over rocks. 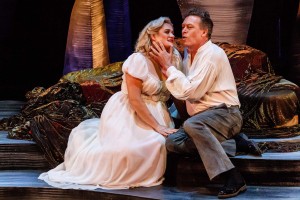 The whole set up of the night time hunt, the lovers tryst, the discovery and ensuing drama were all really clear. Here are the lovers discovered with King Marke looking disconsolate in the background. 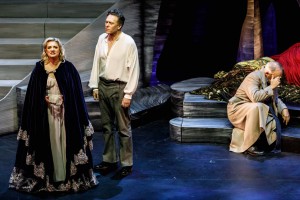 There was a small period during which the subtitles didn’t work but it didn’t affect my enjoyment, or capacity to follow the story at all.

The simple stage setting continued to work in the third act where we are alone with Tristan dying in his castle, waiting for Isolde to come. The upper deck turned into castle battlements with the shepherd piping away. It’s all over quickly when Isolde arrives accompanied by King Marke, not to condemn but to unite, the lovers. Here’s the bloody denouement. Shades of Brunnhilde and the end of the world. 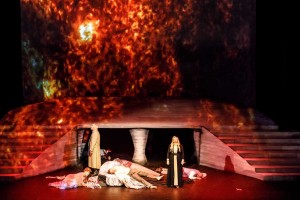 But of course, given all that, what matters most is the music. And here, all of it was superb. We were seated in the front row, almost on top of the orchestra and their playing was sublime under the baton of the British Wagnerian expert Anthony Negus. All of the singers were great. Lee Abrahmsen was amazing; a stunning voice, full of power, effortlessly hitting all of the high notes, but beautifully modulated and nuanced to convey emotion in spades. She made this most demanding of roles appear effortless. No sign at all of the virus that had laid her low over the week-end. A wonderful, moving, powerful performance. A memorable Isolde.

The English tenor Neal Cooper was a fitting Tristan to Lee’s wonderful Isolde. He had a very light voice which was incredibly clear throughout. As in all of Wagner there is an ongoing battle between orchestra and singers for dominance, but here the singers mostly carried the day. The role of Brangwane was filled by another English singer, mezzo soprano Sarah Sweeting who was also very good. King Marke was sung beautifully by Queensland bass Steven Gallop. He brought the character’s nobility and dignity to every scene. Everyone else was terrific. Standing ovations for the orchestra and for Lee Abrahmsen and multiple curtain calls for the whole cast, including production staff completed a terrific night at the opera.

I agree with this review by Simon Parris.