The second place we visited at the Biennale is now known as the Welcome Centre, but in my day it was Sacred Heart College where my paternal aunts and cousins went to school as boarders many years ago. I’ve never set foot in the building despite spending six years at Loreto Abbey on the other side of town. Memories of boarding school days permeated my visit but I was pleased to discover one of my favourite works here. Jenny Cromption’s enormous installation Phototaxis. I was familiar with Jenny’s work from the exhibition Who’s Afraid of Colour held at the Ian Potter Centre in February 2017 which I’ve blogged about here, where I mention and include photo’s of Jenny’s work towards the end.

This new work was housed in one of the old dormitories, a suitably impressive space for an impressive work. Remember to click of the photos to see them enlarged. 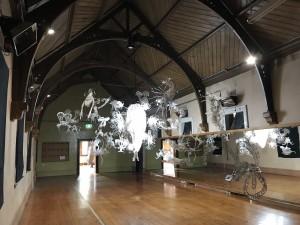 Photographs don’t do it justice. Phototaxes means the bodily movement of a motile organism in response to light. Hence the brilliantly lit central figure. 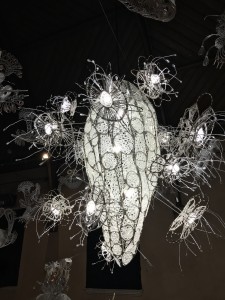 Around which other creatures hang and although they are fixed in place there’s a strong sense of movement. What wonderful, imaginative, exotic creatures they are. They reminded me of deep sea creatures photographed by robotic submarines in the depths of the ocean far below where humans can venture. 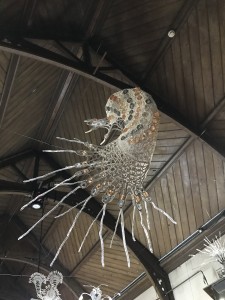 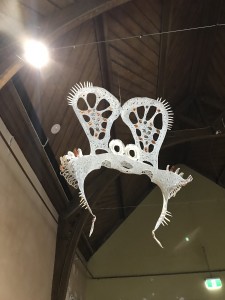 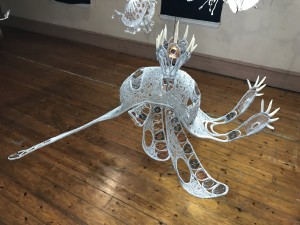 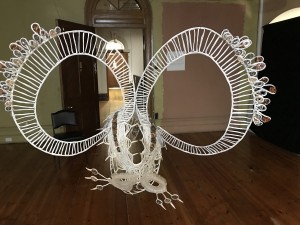 There’s no indication in the artist’s statement about her impetus for making these creatures but it says she focuses on themes that explore the environment. She gathers natural materials in a sustainable way which allows her to connect, listen and interpret an essence of the landscape through the making of sculpture and paintings. So we just have to draw on our own imaginations to interpret this creative work. I loved the whole thing. It certainly enlivened the old dormitory.

There was more indigenous art nearby; including this by Matjangka (Nyukana) Norris. Two beautiful, large paintings. The photographs don’t do them justice at all! 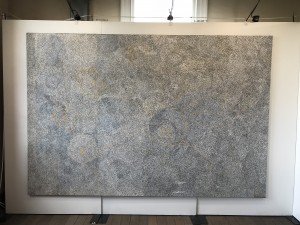 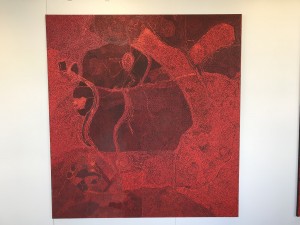 I liked this handmade paper by Winsome Jobbing. She has developed unique systems of papermaking and ranks highly amongst artisan paper-makers worldwide. There’s something ethereal about this which I loved. 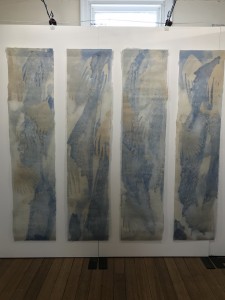 I also loved some photographs by Suze van der Beek that were displayed in this building. They were made during a residency the artist undertook at Narawntapu National Park where she could look out at the wide expanse of Bass Strait. It was really hard to tell whether they were photographs or paintings. Each was basically one or two colours shading lighter or darker. Blues and purples. They reminded me of Rothko paintings. But were impossible to photograph!

After Sacred Heart (I can’t get used to Welcome Centre!) we found our way to St Andrews; no longer the cathedral that it was in my day. For the Biennale it’s home to works depicting The Great Australian Landscape. The paintings here were all very large and so impossible to photograph – but I attempted the impossible because I wanted to remember them. You really have to see these in situ to get a proper appreciation of them. I was particularly taken by Amy Joy Watson’s sparkling needlepoint works depicting Arkaroola. Quite magical. As it says in the artist’s statement the work shimmers reacting to light while the image and colours change as you move around them reflecting our experience of nature. Hard to capture. 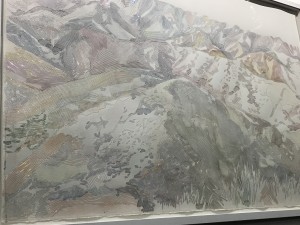 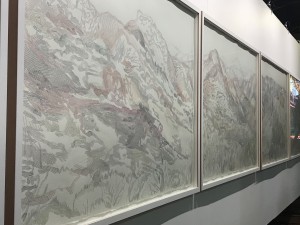 And I liked this work by Troy Ruffles depicting the Tasmanian landscape before, during and after a bushfire. He’s seeking to balance counter emotive states with those of nature – loss, growth, change – and represent the complexities of internal and external states of being where mind and nature coalesce. Whether that’s achieved I’m not saying, but they are impressive paintings. 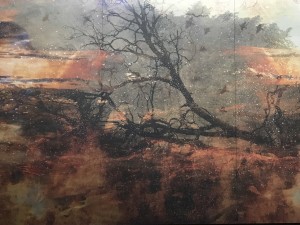 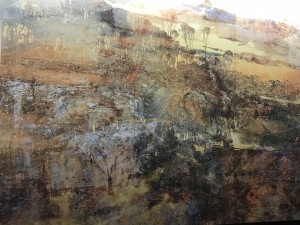 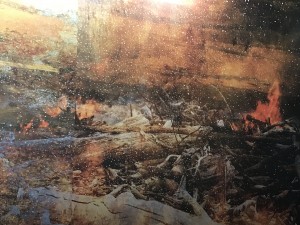 I also liked this panel, one of of a trio by Andrew McIlory seeking to depict the turbulent, unforgiving seas that sailors, convicts and immigrants were forced to encounter when approaching New South Wales. The raw power of the sea in all its beauty and terror is conjured up here I think. 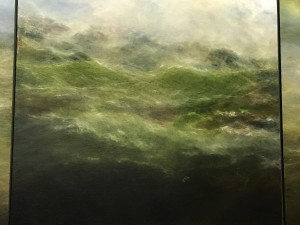 There was more art in St Andrews Hall behind the old cathedral. I quite liked some of it, but didn’t photograph any of it. Overwhelmed by all of the different work I’d seen during the day and saving myself for day two on the morrow.