We’ve been lucky in Melbourne to have two Wagner operas performed already this year. Both in February. First up was Melbourne Opera’s The Flying Dutchman which we saw on 5 February at the Regent theatre. A great venue for a great production. 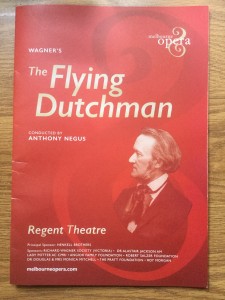 This is the fourth of Wagner’s operas but the first of his mature works. It was written in 1841 and originally set in Scotland with Daland and Erik named Donald and Georg respectively! But an opera with a similar story line premiering at the same time made Wagner move the setting to Norway. He also revised it in 1860 after completing Tristan and Isolde. This was mostly in terms of the orchestration but he also changed the ending in a way, according to Anthony Negus, our conductor in this production, in the programme notes, that conjures the redemptive ending that Wagner always wanted, but was not yet ready to compose in his pre-1848 period.

It’s Wagner’s most accessible operas as well as his shortest. Most often now played in a single-act version although this wasn’t always the case. But it’s how we saw it here in Melbourne. I’ve seen it twice previously, I can’t remember in what order. An Opera Australia production in Melbourne in 1997 with the Australian baritone John Wegner in the title role, wearing a black leather outfit and looking very dramatic atop his ghostly ship. Also in Copenhagen in the late nineteen nineties. I don’t remember much about the production except my two AMIEU colleagues (we were on a tripartite meat industry mission checking out Denmark’s pork processing industry) had very good seats.

Whilst it’s Wagner’s most accessible opera, it still takes some work to understand the psychological underpinning of the story. Without that, all meaningful engagement with the opera for me is lost! Nowadays I have the time and energy to read the libretto and listen to the music in advance which enhances the experience on the night.

Michael Tanner in his book Wagner calls the Dutchman the prototype of the Wagnerian protagonist: someone who has done something so terrible that he has to spend the rest of his existence looking for salvation, or redemption, which comes only through the agency of another human being. He goes on to suggest that all of the redeemers in his works long to redeem just as much as as the sinners long to be redeemed. In this opera Tanner says; Senta needs the Dutchman quite as badly as he needs her. Her life is without a genuine purpose, it only has a visionary one until he appears on the scene.
we see it here in his first work, and again in his last opera, Parsifal which concludes with the words Redemption to the redeemer.

The director of this Melbourne Opera production , Suzanne Chaundy, rightly focuses on this element. The character Senta, and what motivates her to sacrifice herself for a man she only knows as a myth, has been central to my preparation of this work. She goes on, in the programme: Deeply empathetic and longing for escape herself, she can understand the plight of the Dutchman …When she and the Dutchman actually meet .. her fantasy world is realised, and each fulfill one another – she finds her other self, and he finds his, enabling peace in their wild existences.

This, like all of the Melbourne Opera productions that I’ve seen was terrific. Always great production values, simple but effective sets and innovative lighting. This was no exception. And of course the music! Anthony Negus who was conductor for Melbourne Opera’s wonderful Tristan and Isolde from last year once again drew from the Melbourne Opera superb playing to the highest standard. And the Melbourne Opera Chorus was also in fine form throughout the many stirring choruses in this work. They sounded wonderful and acted out their roles as sailors and their girlfriends perfectly. Fantastic for a non professional body of singers.

The set was a simple ship structure which worked well for all of the scenes involving the sailers. Here we have them pleased to be nearing home, not noticing the ghostly ship coming into view. Thanks to a canvas backdrop, not the projected image which is what this was mistaken for by at least one critic. He was corrected on twitter by producer Greg Hocking 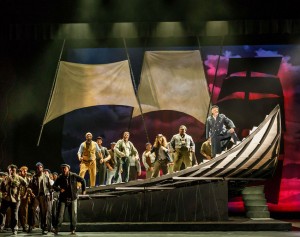 There was ample space in front of the structure for the spinning girls who are listening to Senta tell the Dutchman’s sad story, with increasing alarm as she works herself up into a great state. Melbourne audiences, me included, have high expectations of our very own Lee Abrahmsen and as Senta she met them all. Beautiful singing and powerful acting. She inhabited this role as she has previously excelled as Isolde for Melbourne Opera. 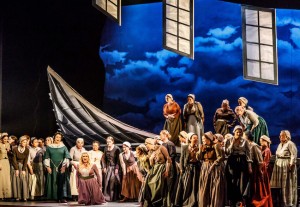 And the deck transformed into the space where the central dialogue between Senta and the Dutchman took place. Tanner calls this the heart of the work. The two singers taking turns to stride around the other with increasing intensity. Thomas Mann quotes the Dutchman’s lines: The sombre glow that I feel burning here,/ Should I, wretched one, call it love? / Ah no! It is the longing for salvation, / might it come to me through such an angel! He goes on to say; What a penetrating insight into the complex depths of an emotion! Tanner notes that this is theDutchman mis-identifying, and then correctly re-identifying, a feeling.

Properly performed this scene leaves the audience exhausted which is what I felt here. It made Senta’s decision to follow this character and redeem him, at such cost to herself, both imaginable and necessary. Which is the critical leap required.

It’s very unusual to have the ghost crew on the stage in this opera. Usually we merely hear their voices. But in this production we got to see them in all their ghostly ghastliness. The dark red lighting of their ship behind them, the ghostly lighting along with the accomplished singing, was satisfyingly blood curdling! 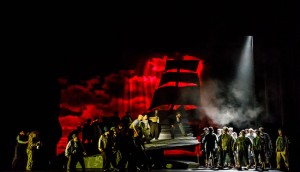 There were great performances from all of the singers including the two leads seen here towards the end of their great dialogue. I was not familiar with the Englishman, Darren Jeffrey who as the Dutchman was terrific, both in singing and performing. He’s been touring the Netherlands in the role and so was very familiar with it. He certainly looked the part. Actually he reminded me of my nephew! But I won’t tell Nick! It’s a difficult role to make sympathetic but I felt this was achieved. I loved how this was staged which made it, correctly, the high point of the production. It was sufficiently intense, with plenty of sublimated passion, to make Senta’s sacrifice realistic. Which, whilst at the heart of the opera, is the hardest bit to come to grips with. 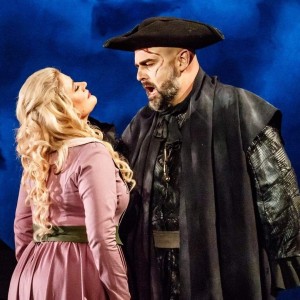 The Australian Steven Gallop was also terrific as Daland, Senta’s father who is happy to sell her off to the mysterious stranger in exchange for treasure. Again he made this unsympathetic character real. Here he is with Lee as his hapless daughter. 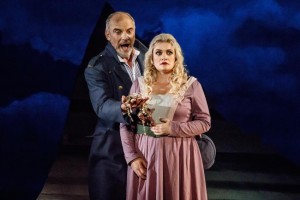 Rosario La Spina played Erik so well he was rewarded with rave reviews announcing him a new-found Wagnerian tenor for the ages. He was deeply sympathetic as the uncomprehending, spurned lover. I look forward to seeing him in more Wagnerian operas. 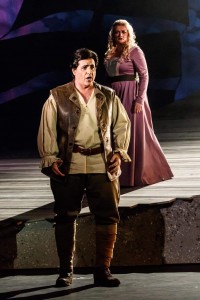 And here is Roxane Hislop as Mary, trying to distract Senta from her obsession with the Dutchman. She performed this relatively small role well. Another great Australian singer. 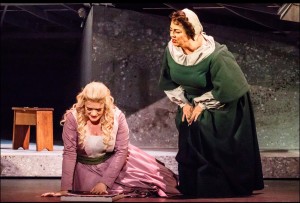 Finally, here is the whole cast, triumphant at the end of their thrilling performance. 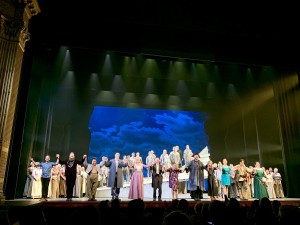 I did have a couple of qualms about a few matters that did not distract from the performance as a whole, but which I felt if addresses would have improved it. I agreed with one critic who said that we should have had at least one spinning wheel among the women during the spinning song. Instead they all mimed the spinning action. It worked okay but would have been better in the traditional presentation with the women in rows sitting at spinning wheels. Or if that was not achievable; for whatever reason as there was clearly space; then one or two spinning wheels would have been an improvement.

A bigger problem was the size of the Dutchman’s portrait, in front of which Senta dreams and from which her obsession grows. It was tiny!!! And it was passed around between the women who passed it amongst them. This is meant to be a big brooding, romantic painting that feeds Senta’s dream of saving its subject. I thought having such a small and very ordinary portrait militated against the director’s stated intention of focussing on Senta and her obsession. I would have preferred an enormous portrait hanging from the prow of the ship structure above the women; brooding and romantic. But it wasn’t to be.

Another significant mis-step for me was the nature of the ending. Anthony Negus in the programme refers to Wagner’s stage directions which were designed to emphasise the redemptive nature of the ending. We are meant to see the Dutchman’s spirit rising from the waves clasping Senta to his bosom. Instead we saw Senta slowly descend beneath the ship’s deck in a trancelike state. This is instead of flinging herself from the cliff above the ship into the raging sea below. And there was no lovers embrace. A pity I thought and which might have been achieved via a projected image in this technological age.

But these are mere peccadillos! It was a terrific night at the opera.

A review from one of my favourite Melbourne reviewers, Simon Parris, can be found here.

And an article published prior to the performance includes an interview with the Director Suzanne Chaundy which explains her approach can be found here.