We saw two operas in consecutive weeks at the end of September. First up, on the 19th was Norma. Here’s its very refined looking programme. 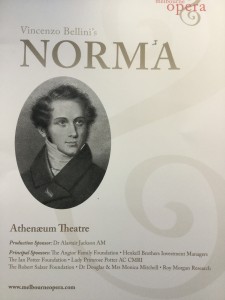 It was at the Athenaeum which I like as a venue even though they say the acoustics are not great. It’s a beautiful looking theatre with great atmosphere. We were in the front row; this close to the orchestra! 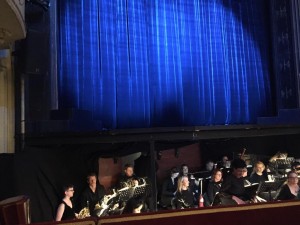 I’ve no idea why I took that photo! The other memorable thing I did on the night was spill mineral water over the man sitting next to me!

I was pleased to get the opportunity to see Norma as I’ve heard of this opera seemingly forever and have heard excerpts from it on nearly all my best of opera recordings. It’s been described as the Everest of operas and has been performed by all the greats – Maria Callas, Joan Sutherland and Montserrat Caballe. And I had high expectations of a production by Melbourne Opera.

What I love about their productions is their sparseness and inventiveness; no doubt borne of necessity, but the result is that stagecraft never overwhelms the singers as happens with too many opera productions. It’s also a testament to the director, Suzanne Chaundy. I’ve appreciated all of the productions I have seen that she’s directed – Roberto Deveraux, Tristan And Isolde and The Flying Dutchman. And this was no exception. Some reviews thought mixing up Druids and freedom fighters was a step too far, but it worked for me.

Of course the night belonged to the singers. Especially Helena Dix in the title role. Here she is towards the end of the opera. 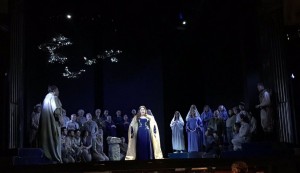 I’ve seen Helena before, as Queen Elizabeth in Melbourne Opera’s Robert Deveraux where she was wonderful and so expectations were high. Especially as she has also covered this role at the Met in New York. She did not disappoint. More qualified people than me attest to the wonders of her voice; its power, range and versatility. Wonderful to hear; and sitting up close, seemingly effortlessly, which of course it’s not.

I also love her acting. She has such an expressive face and can convey emotion so well there and in the toss of her head or wave of a hand. She was able to make the role of Norma accessible and comprehensible. Not an easy task! She was ably assisted by all of the other performers.

Here she is with two of the other principals. 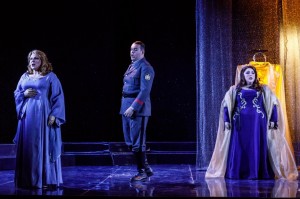 Amual Sakker was great as Pollione who is also hard to make remotely likeable given he is ditching Norma and his two children to go off with Adalgisa. But he managed to do it! Jacqueline Dark, is older than Adalgisa is meant to be, but she made this work. She was able to convey her conflicted feelings – loyalty to country or passion for lover – persuasively and clearly. Her duets with Helena were a highlight of the night.

There is a Medea like subplot which has Norma considering killing her children and the two little boys in these roles were terrific for all of the time they were on the stage, which was a lot. The costumes worked well; Norma’s outfits were appropriately regal and Adalgisa’s appropriately nunnish! The orchestra was also wonderful.
The other stand-out was Eddie Muliaumaseali’i as Norma’s father Oroveso. Such a powerful voice. A really wonderful night at the opera. Here is a review, with terrific pictures, from Simon Parris: Man In The Chair.

A week later we were at the Malthouse to see 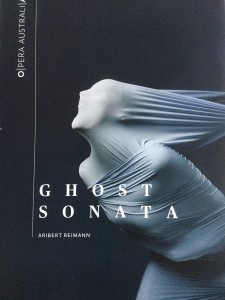 I just love this programme cover, which actually covers the experience really!

I have really liked previous collaborations between Opera Australia and the Malthouse, especially Dark Rider a while ago. This one was a bit more obtuse, but incredibly interesting. Here is a picture of the stage. 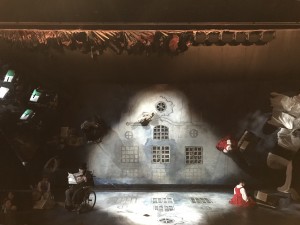 You can see the Old Man in his wheel chair reading the paper, and the Milkmaid in her red dress sitting on the floor to the right. That’s a mirror tilted above the stage that was used to maximum effect during the performance. It was all quite mad, but rivetting for the hour or so it took. Here’s the orchestra; small and cramped alongside the stage, and if you look closely you can see the Student sitting behind the Old Man. 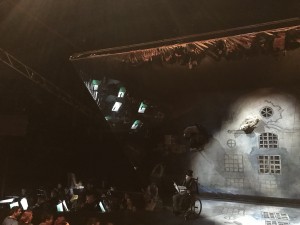 The music, by Albert Reiman was very atonal and strange. Not melodic! But interesting and totally appropriate to the tenor of the story. He was a German composer born in 1936 and this opera premiered in Berlin in 1984.

The story is taken from an August Strindberg play and is a study in existential terror! Fear of meaningless, the void, what do our lives matter. There is a plot of sorts; the Student has witnessed a house collapse, takes water from the Milkmaid, discovers the Old Man ruined his father, and as a sort of recompense the Old Man introduces him to the Colonel who has a daughter the Young Woman who, of course, attracts the attention of the Student.

The Colonel, who looks very distinguished in his uniform, also has a mad wife (the Mummy) who lives in a cupboard, as well as some malicious servants. There were some great theatrical moments; people emerging through trapdoors in the floor, their movements reflected in the mirror, setting of tables, unwrapping of chairs, heaving around a statue which is a bust of the Mummy from when she was young and attractive.

Everyone played their appointed roles well. The Old Man was sufficiently evil, the Student appropriately naive and hopeful to start with but hopeless in the end (although I did find it distracting having him take off his clothes before finally succumbing to his fate. I expected to be appalled by the character of the Mummy confined (voluntarily) to her cupboard, but in fact she turns out to be the strongest person amongst all these weirdos and somehow turns the tables on the Old Man who gets his deserved come uppance.

One of the highlights was the amazing, contorted dancing of the Milkmaid writhing around on the floor doing extraordinary things with her body. Here she is in her place on the floor. I don’t think she ever sings. 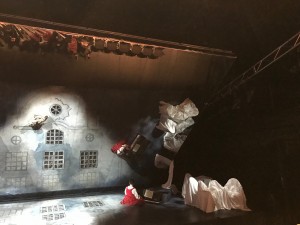 I didn’t know what any of it meant but I was mesmerised – enjoy is the wrong word to use!

Here’s a review that explains the story better, my summary above is what I understood on the night! And it includes pictures which show the inventiveness of the staging. It’s also by Simon Parris: Man In The Chair.