I took two bus trips at the start of October. The first when I and two friends joined the Melbourne Women’s Walking Group on a bus trip to the native garden at Cranbourne on Sunday 6 October. We were able to do so because one of our number is a member. The group was established in 1923 because the Melbourne Walking Group would not admit women as members!

Our host member, knowing the drill was properly prepared and I, as instructed, was wearing good walking shoes, but I was a bit disconcerted to see my fellow travellers emerging clad in serious hiking gear á lá Katmandu, waterproof jackets, walking sticks and backpacks! It was all very formal getting onto the bus, numbers ticked off and the small fee of $20 paid. Once travelling we had to sign the acceptance of risk form and nominate which walk we were joining; a serious 12 kilometre hike around the perimeter of the garden, medium or easy or Garden Explorer. Given we wanted to see the garden we opted for the latter before discovering it was an open-air motorised people mover that circulates around the garden every 20 minutes. So we decamped to the easy walk which ended up with us wandering around the garden as we wished.

The garden was established in 1970 after much lobbying by people for a place dedicated to Australian native plants. Apparently the area was once a massive sand dune. There have been major renovations in 2006 and 2012 leading to the magnificent garden we have today. Whilst the area housing the demonstration gardens is relatively small, we walked around 4 kilometres looking at plants. The full 363 hectare site includes one of the very few sections of remnant native bushland in Victoria. It’s recognised as a site of State significance for flora and fauna conservation with 25 species in danger. It has over 10 kilometres of walking tracks (hence the serious walking gear), 6 kilometres of cycling tracks and a look-out tower. In total there are 170,000 plants from 1,700 plant varieties. Obviously we only got to see a fraction.

You start at the Red Sand Garden which is on a lot of the promotional material for the garden and which is spectacular. 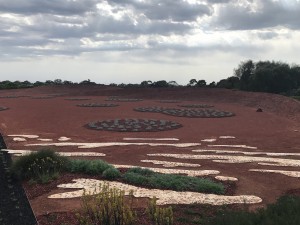 It reminded me of Lake Mungo, looking as it does, like a dired out lake-bed. Designed to have grey foliage contrasted against the red sand. Mass plantings of Acacia and Spinifex stablise the sand dunes and lower down there is carpet of muntries (Kunzea pomifera) which provided food for Aborigines.

These two Gymea lilies (Doryanthes excelsa) were planted on the path we took into the garden. 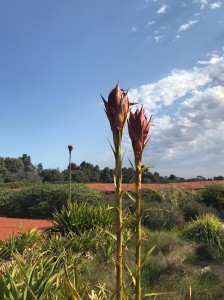 From there we wandered around looking at the different plants in the different display gardens. This is Anigozanthos ‘Western Star Yellow Gem’. 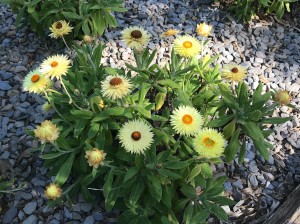 And this one is a Proteaceae, Telopea ‘ Bridal Gown’. Very pretty. 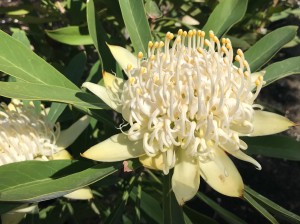 There were lots of different coloured kangaroo paw varieties. Including these two. 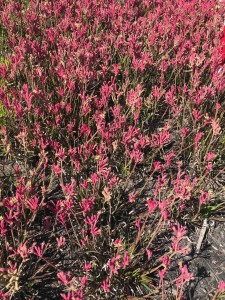 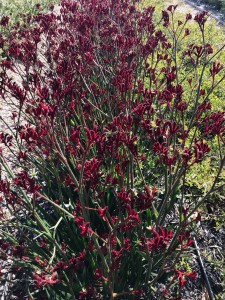 It was a beautiful day, after a cold start due to a strong and freezing wind. Here are my two companions studying a plant. This shows the general lay-out of this part of the garden. 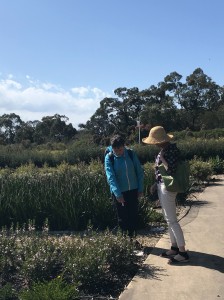 And a couple more plants that caught my fancy, but not enough to record their names! 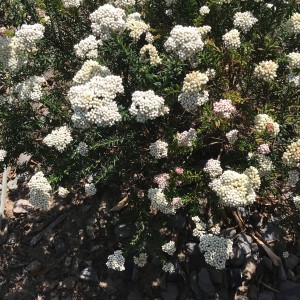 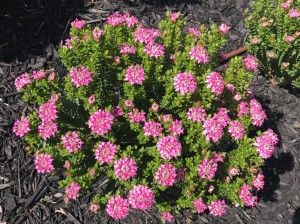 The garden is divided into regional sections and I was taken with this pioneering implement found in the Mallee area, it’s a Mallee Scrub Roller used to flatten Mallee Eucalypts and associated vegetation, invented in the 1800s and hauled by a team of bullocks or horses. This is what produced all those flat rolling paddocks full of wheat around Watchupga. 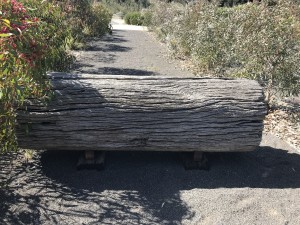 This is Glischrocaryon behrii, ‘Golden Pennants’, a shrub found in the mallee regions of South Australia and Victoria. Presumably this was part of the ‘associated vegetation’ crushed by that rough and ready roller. 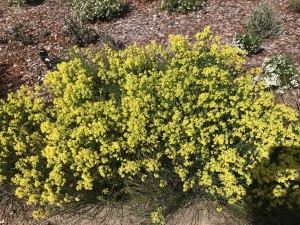 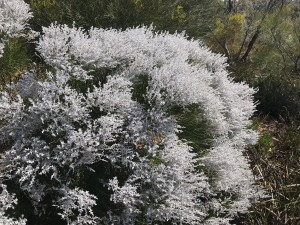 It was hard to get a good picture of the garden as a whole as all of these plants are at ground level and disappear under the green of the overarching trees when photographed at a distance. As you can see in this photo taken from the other side of a lake that’s been made in the middle of the gardens. 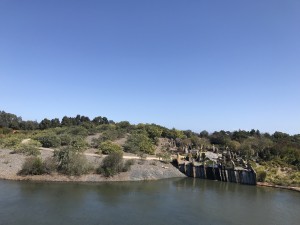 Here are another couple of mallee plants. 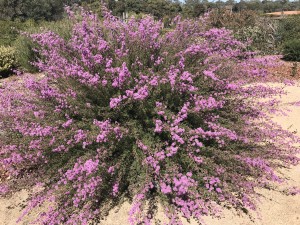 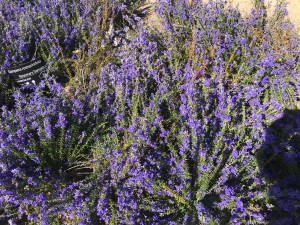 We wandered down near the lake and found these beautifully sculpted – or tortured – Grevilleas (Proteaceaes). I liked them a lot. 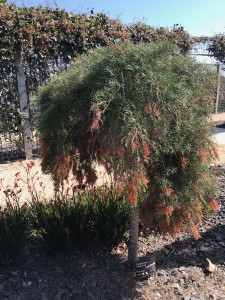 They looked very pretty in a row. These were at the end of a section devoted to showing how Australian native plants could be used in suburban gardens. 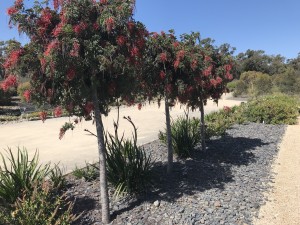 And this plant, Albbertia serrata, ‘sun shine’, would look terrific in any garden but would need more space, and sun, than mine would allow. 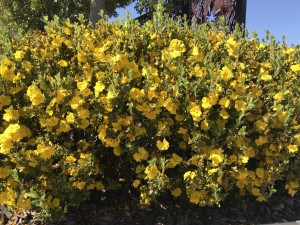 Along the way we had talked to a volunteer Garden Ambassador in the Garden Shed at the end of the Northern Display Gardens. He was very informative. We were sorry we were missing the annual Friends of Cranbourne Spring sale on the 26th of October. He explained its a one off annual event because they don’t want to put the local native nurseries out of business. He was full of admiration for the Austplan native plant nursery at Arthur’s Seat which I talk about at the end of this post. Here’s another photo of my companions posed against another large and vibrant hedge that would look great anywhere. Here is the Epacirs longiflora ‘Dwarf Fuschsia Heath’. It’ related to the Epacris impressa ‘Common Heath’ which is Victoria’s state emblem. This one is much prettier. 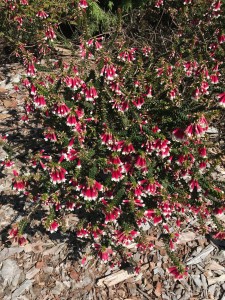 Especially close up. So pretty – but very small! 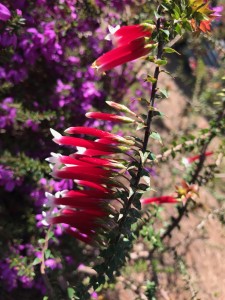 Here’s a typical mass planting of banksia’s that we saw as we wound our way around a tropical plant area and up a number of little hills.

And a ground cover. We had our lunch, packed by our enterprising member of the Melbourne Women’s Walking Group (so that’s what the backpacks were for!) in the Stringybark picnic area where we got another perspective on the red sand garden. 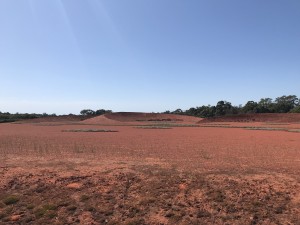 Then we walked through the final segment of track which is when we came across these exotically shaped grass trees. That was our walk around the gardens over. It took a couple of hours and we’d walked four kilometres at the end. After a coffee and cake at the Boon Wurrung Café we walked to the Trig Point Lookout which is a pretty basic metal structure, you’re told not to go near it during an electrical storm! These pictures show how flat the landscape is. If you look closely at this one you can see the Cranbourne race course. 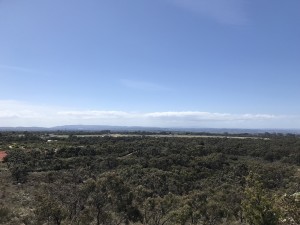 And in this one you can see the suburb and in the far distance the city. And in the background here you can see the bay. You are meant to be able to see two bays from the look-out but I couldn’t work that out! You also get a good look at the remnant original scrubland that covered Victoria. 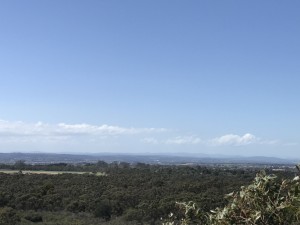 We went for a small walk through that scrubland which was, I must say, quite uninteresting! By this time it was quite hot. I was also anxious that we not keep our colleagues waiting for the bus back to Melbourne which was to leave at 3pm sharp so we went back to the starting point outside the cafe. Where we said a final goodbye to the red sand garden. 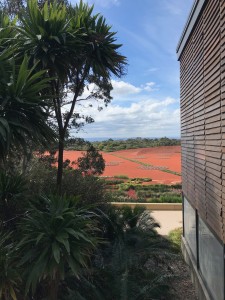 A great day out, with an intrepid group. It was wonderful to be in a bus full of exuberant, talkative, laughing women; all aged in their sixties, seventies and eighties. I hope I’m up for an excursion like this in my eighties. In the meantime I thoroughly recommend a visit to the Cranbourne Gardens, especially at this time of year, for all age groups. Here’s a final picture, of a very pretty, unidentified plant. 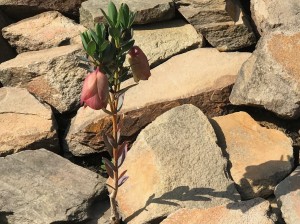