We spent three days at Lake Saint Clair, driving up from Hobart on the 11th of November 2019. It was a warm summer’s day for most of the trip but the weather grew steadily worse the closer we got to our destination. Here’s our first glimpse of The Pump House; our home for the next three nights. 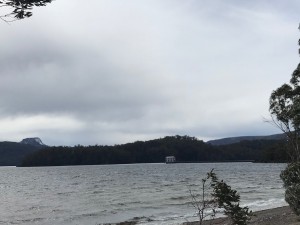 There was snow on the surrounding mountains; not a surprise as we’d been diligently checking the weather for the preceding week noting snowfalls and below nought degree temperatures. So, cold but pretty. 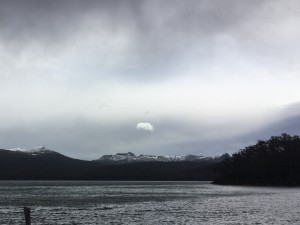 Here’s our residence up close – seems inappropriate to call it a hotel. A pretty pink. Whilst built as a pump house it was never actually used as one. We loved being on the water which you could hear lapping against the building. Like being on a boat but without the motion. 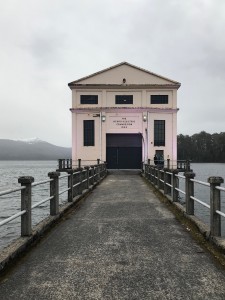 We were on the ground floor in a comfortable room. Most importantly with a comfortable bed, good heating and a good shower. The bathroom had a much appreciated heated tiled floor. 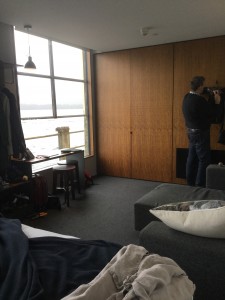 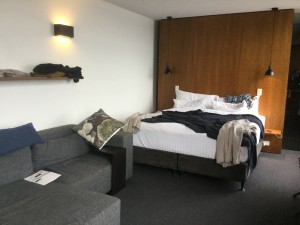 Here’s the view from our window. The lake remained grey and choppy for the duration of our stay. We were told that a platypus could be seen from this room on calm, sunny days. Unfortunately that was not to be and we didn’t see any signs of life in the water. 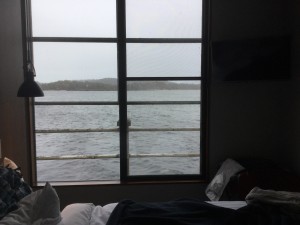 There were three floors, with a very cosy lounge on each of the first two levels. This is outside our room – note the tray full of apples. They were delicious. 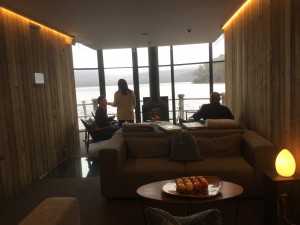 There was a great wood burning heater roaring at all times so that sitting here watching the weather sweep over the lake was very atmospheric. 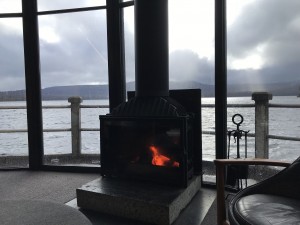 You could sit here and read or play games or have a drink from the bar. Lots of very good Tasmanian wine and, even better in this stormy weather, great Tasmanian whisky. It was an honesty system with guests recording what they drank which I thought was brave until another guest pointed to cameras carefully places to ensure guests were abiding by same. 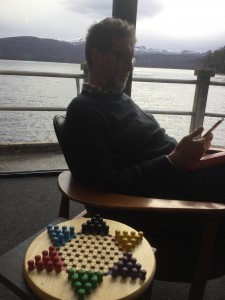 On the top floor there was a little library that Joe availed himself of to read a bit of Tasmanian history. There are four bedrooms on each level. 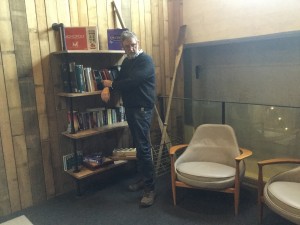 Steep stairs; you wouldn’t want to go up and down after drinking at the bar. 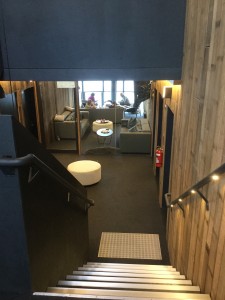 We went for a walk to check out our surroundings. Here’s Joe on our way across the causeway. As you can see we were prepared for the weather. 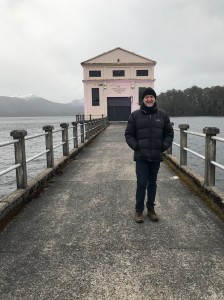 This is looking the other way; you can see the Shore House behind me. I am well and truly rugged up – very grateful for this very sturdy raincoat with voluminous pockets that meant I didn’t have to carry a bag. 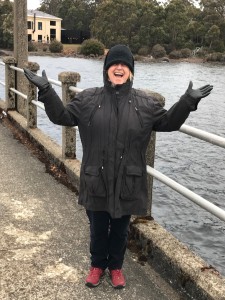 There are five rooms in the Shore House; added to the twelve in the Pump House and a separate retreat in the bush beside the Shore House; makes a nineteen rooms in total. I think there were around thirty people there during our stay but it was hard to say. You only saw everyone together at meal times, sharing communal tables that were quite jolly. Apart from that you weren’t very aware of other guests at all. We had breakfast every morning in the Shore House and dinner there on two of the nights we stayed. In the evening animals browse on the lawn. 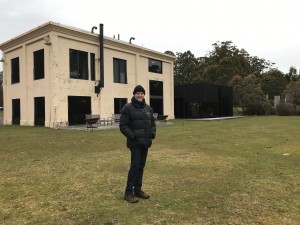 We were promised lots of wombats but I only got to see this one. Apparently you see them more frequently if you stay in the Shore House. This one was near the carpark and took off as soon as I took this picture. 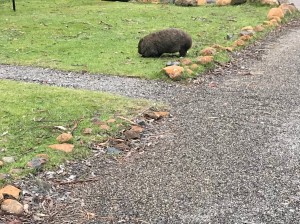 Wallabies were more prevalent and we saw quite a few, including out the window while eating dinner. But this one was out near the staff quarters. We walked through lovely bush – mostly in sight of water. 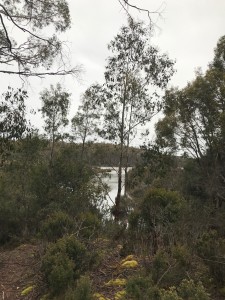 Intermittent showers were no deterrent to these hardy walkers – which was good as this was probably the best weather we had during our entire stay. 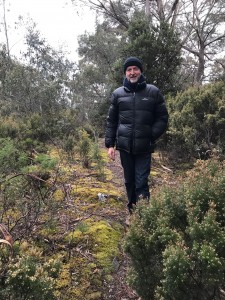 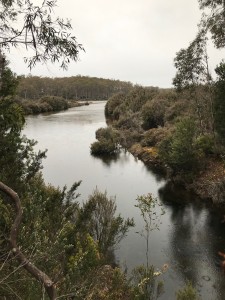 Lots of water everywhere. The website promises lots of hidden coves and beaches to be discovered. This lake is, apparently, a trout fisherman’s paradise with world class fly fishing. There were no fisher people around in this weather. 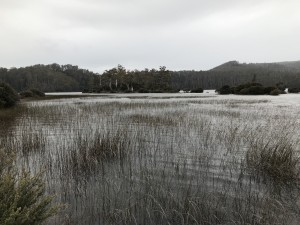 There are rowboats for guests. Presumably an attraction in friendlier climactic conditions. Note the dinghy which is for hotel staff to use when guests have to be rescued! Going the other way we came to the shore of Lake Saint Clair where the Pump House could be seen across the way. It is a striking building from every angle and a focal point on the lake. 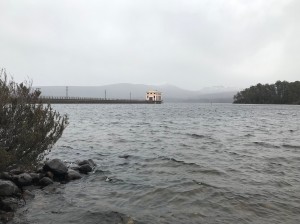 We saw and were amazed by the number of beautiful trees. Here’s one. And I do believe this is probably a wombat burrow at the base of one. 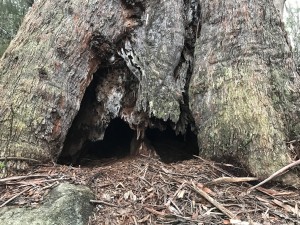 We walked back to the other side of the Shore House where you got another glimpse of the Pump House. On the way back we passed a man-made canal, presumably something to do with the hydro ambitions for the pump house that were never realised. 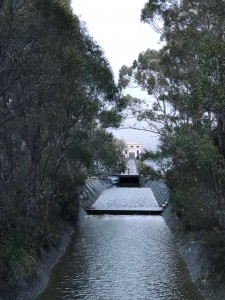 By then we were getting hungry and it was time for dinner. 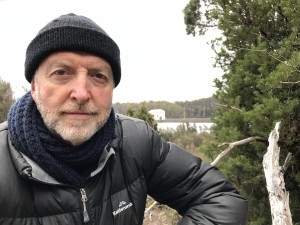 We came out to a very dark night. Here is the moon, a ghostly galleon, midst the trees. And back along the causeway to our exotically lit up abode. 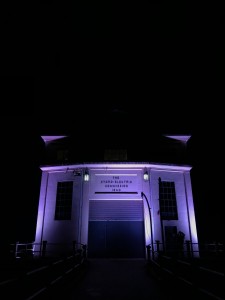