We enjoyed three operatic experiences during February. First up, on the 7th, this concert, seemingly involving every opera singer in Melbourne. 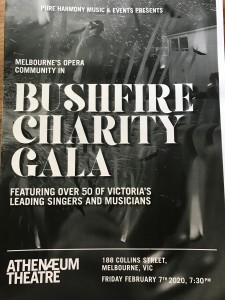 I heard about it on twitter and wasn’t quite sure what to expect; but it was a terrific programme. 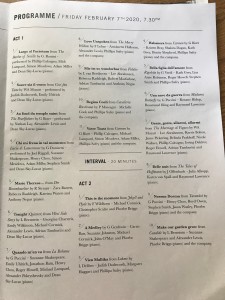 And there was quite a joyful feeling in the Athenaeum as the audience gathered – a very different atmosphere from other nights at the opera where you know what is in store and there is that sense of anticipation. Here people were looking forward to a different sort of experience and they got it. From the outset the two comperes- Adrian Tamburini (who had come up with the idea for the whole concert) and Suzanne Johnston – had great stage presence and delivered the introductions with lots of wit and humour. As well as efficiently moving things along. There was quite a bit of audience participation; we were encouraged to show our appreciation for the singers and we did loudly and often. The pieces being performed were obviously designed to involve as many singers as possible and lots of them were great fun.

We started with four baritones singing a humorous piece from The Barber of Seville. It included Phillip Calcagno who owns the local hairdressing salon SO HAIRcutters and who used to cut my hair until he took off for Italy for a year to develop his singing. We’ve seen him perform a number of times and he’s terrific. All four singers looked as though they were having a great time.

Later in the evening we had four sopranos singing the well known Harbanera from Carmen and they were all terrific; vamping up the action along with the singing. Later still we had four tenors singing Nessun Dorma from Turandot; each putting their heart and soul into it resulting in an enormous sound. All in all it was a night for operatic hits; covered including the duet Au fond du temple saint from The Pearlfishers with Nathan Lay who I didn’t know and Alexander Lewis who we’d seen in Westside Story in Sydney. Alexander was terrific in all of his pieces, including in the ensemble of singers performing Tonight from that production. We also loved Michael Cormick who we’ve not encountered before. He did a Gershwin medley with Suzanne Johnston and a couple of others and it was very moving.

We got a little preview of Fidelio which we were to see the following week. Four of the singers who are performing in that production sang Mir ist so wunderbar. The conductor Anthony Negus accompanied the singers on piano for that item. He was sitting in our row of the theatre and we moved down a couple of seats so he could be near the aisle – the two women closest to the aisle wouldn’t move! Adrian Tamburini joked that Beethoven had only written one opera because he was so bad at it!

The tenor Stephen Smith was in a number of items – the Lucia di Lamermoor sextet, Nessun Dorma, the quartet from Rigoletto – and gave it his all. A strong voice and even greater emotional presence. Later I looked him up and discovered his amazing back story (from rags to riches) which is told here.

I also loved the duet from The Merry Widow which I haven’t seen, performed by Alexander Lewis and Antoinette Halloran; both singers were mesmerising. The only soprano I recognised was Lee Abrahmsen who I’ve seen in a number of Wagner operas where she has always been fantastic. I also really liked Rebecca Rashleigh, the winner of the 2018 Herald Sun Aria. Another singer I’m not familiar with, Michelle Cook who sang a piece from Cavalleria Russticana had great stage presence.

There were four pieces that involved great choral singing by the whole company. One being the final, very appropriate piece given the purpose of the evening, Make Your Garden Grow from Candide, which in the circumstances was quite moving. We were told before we left, that the night had raised around $70,000 which was to be given to the East Gippsland Relief Committee (I think that’s the name) – a very local and volunteer driven organisation. We all applauded that.

I couldn’t find a review of the night anywhere, which is a pity. This was our first great night at the opera for the month.

Our second, on the 13th of February, was this.

We hadn’t signed up to see this when it was first advertised but my opera consultant, Breen, recommended it. Whilst not a very good opera there was some very nice music and it’s not staged often, so take the opportunity; was his advice. Hardly ringing endorsement on top of Adrian Tamburini’s joke that Beethoven was no good at opera – I wasn’t sure what to expect but I enjoyed it a lot. We were back in the Athenaeum and had good seats despite booking late, to the side but close to the front in the upper circle. Both Joe and I love being able to watch the orchestra.

It is a different sort of opera to those I am accustomed to. In addition to quite a lot of spoken lines there are lots of quartets – the sort of thing Wagner hated! But overall the production worked for me. The setting in a modern prison worked well. My only discomfort was at the very start during the banter between Jaquino and Marzelline – the former is keen on the latter who isn’t so keen on him. These days his pressing her to marry him looks a lot like harassment!

The singers were very good – especially Rebecca Rashleigh as Marzelline, Kirstin Sharpin as Leonore and Adrian Tamburini as Rocco. I had thought Lee Abrahmsen was to sing this role; but she only did so in the performance held in Bendigo which came after the Melbourne season of three nights. Warwick Fyfe who we know well from our Wagner operas was good singing the role of Pizarro, the baddie, but he over-acted somewhat which was a bit out of kilter with everyone else. We thought the weakest link was Bradley Daley playing the imprisoned Florestan.

Having seen it, I tend to agree with Adrian Tamburini that it’s no surprise Beethoven only wrote one opera because he wasn’t very good at it! Who would have their leading lady dressed as a man for the entire opera? And in this production her garb was very drab indeed – the blue uniform of a prison warder. Awful. The other problem really is that it is neither fish nor fowl – not a full on political drama or nor a heartfelt romance. The latter is a bit hard to pull off when it starts with the loving couple already married. There were two stirring choral pieces; the prisoners chorus where all the prisoners come on stage blinking into the light from their dungeons below, good revolutionary stuff. The second is an homage to marriage by the combined women and mens chorus. It sounded great but the words were silly. All of the cast acted well and there were some quite moving moments. And the two overtures for which the opera is famous were very beautiful. I’m pleased to have seen it.

Here, with some pictures, is a review from Simon Parris.

A second great night at the opera for February, just short of a week after our first.

Our third and most thrilling opera in February was this one. 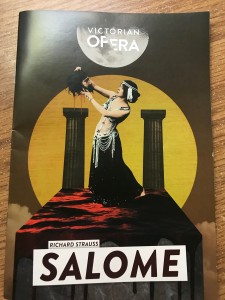 I was keen to see this opera having missed out on seeing Lisa Lindstrom (Brunnhilde in the second Melbourne Ring) perform the title role for Opera Australia in March last year; our trip to Sydney was a week too late! That’s why we signed up to this one early. It was at the Palais and we had seats right up the front. It was an exhilarating night from the opening bars to the dramatic conclusion.

I loved everything about it. The costumes were terrific as was the lighting; and of course, the singing. Lithuanian soprano Vida Miknevičiütė was incredible from the moment she strode imperiously out onto the stage. Her voice soared over the orchestra and her stage craft was astonishing. Daniel Sumegi (another singer we are familiar with from our Wagner) as Jochanaan was also incredible. You hear him before you see him and his voice also reverberated powerfully. Ian Storey was terrific as Herod and I thought Liane Keegan was great as Herodias although some reviews didn’t agree. The other person I really liked was Dimity Shepherd as Heodias’ page.

It’s a psychologically compelling work. Jochanaan comes across as a misogynist in the early scenes and just when I was getting a bit miffed about the story line it completely flips. What came through was Jochanaan’s inner conflict as he spurns Salome. Later the scene where she tells Herod she wants Jochanaan’s head; the to-ing and fro-ing is compelling. Then onto the dramatic finale which was incredible. The whole thing goes for only ninety minutes but you’re completely emotionally wrung out at the end. Goodness knows how the singers feel; especially Salome. She got an ecstatic response at the curtain call.

Here’s a terrific review, including pictures which give you a flavour of the intensity of the production, from Time-Out.