Early in February we went to Woodend for a meal at the Japanese restaurant, Kuzu. It was a wonderful meal and I thoroughly recommend a trip for that sole purpose. The best Japanese meal I’ve had in ages and terrific service. Including from the sommelier who directed us to a terrific wine to accompany the set menu we chose. Check out the restaurant website here.

We were visiting at the same time Hanging Rock Winery was hosting Sculpture in Motion: An Exhibition of Kinetic Sculpture. This is the second sculpture exhibition at the winery which looks set to become an annual event. Great for the region. According to the accompanying brochure these works are: art that is made of various mediums that rely on motion for effect, making it one of the most challenging forms of artistic expression that an artist can undertake.

The Hanging Rock Winery is a beautiful setting. 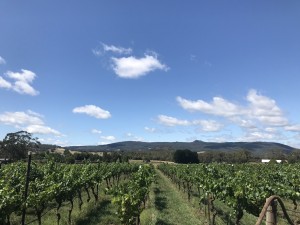 We started in the middle. This is our first sculpture; Resounding Blue by Tanja George who is attempting to create an actual place where we can experience a moment of calming sounds or, if nature chooses, a moment of silence or a cacophony of tones. Jane, being an orderly person, was very keen to untangle the chimes but all of the signs warned against touching the works on display. 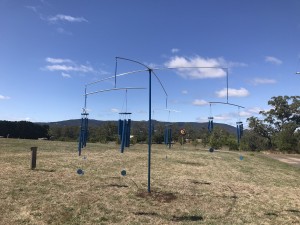 This one is Bipolar Eccentric by Ralf Driessen. The title references mathematical terms relevant to the geometry of the sculpture. At this, our second sculpture I’ve got with the moving idea and managed a video. Bipolar Eccentric

Here are Jane and Joe considering Zephyr by James Cattell. 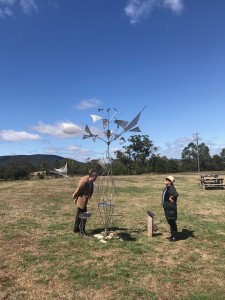 This is a close up of the top which to me looks like the sails of a ship but James is trying to capture the fleeting and illusory nature of life’s delicate moments. 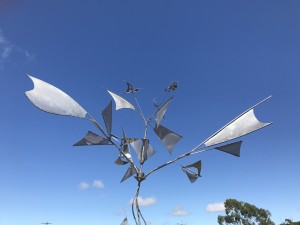 This is BJF23 (silly name and not explained), by Ben Fasham. It mingles bespoke shapes, balance and additional movement. Looks like a face in this photograph although it was moving a lot. 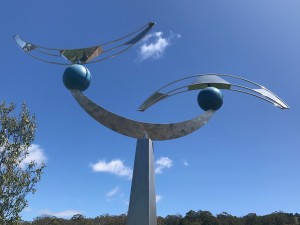 Michael Sibel’s Egg and Spoon was fun. A nice play on the nursery rhyme. 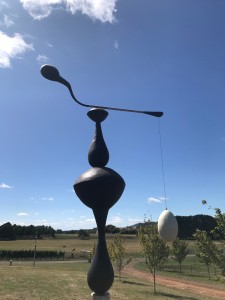 Here’s another moving picture of a moving sculpture, Rudi Jass, Silver Leaves. I didn’t copy the description of this work, but it was one of my favourites – title, form and location combining to create a very kinetic experience. Silver Leaves 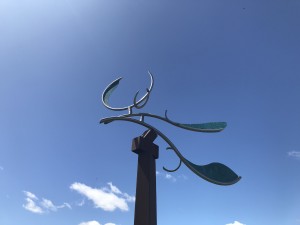 Joe and Jane are here admiring Bell and Feather by Anton Hasell. When the wind blows the feather bends and the twist bell sounds a chord; according to the artist; resonant with the ambient acoustics of Hanging Rock. Listen child, the drone you hear calls to an ancient part of your being. I don’t think we listened hard enough. 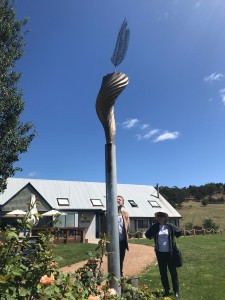 Here’s a close up. All the works looked great against this lovely blue sky. And there was enough wind to make them move. 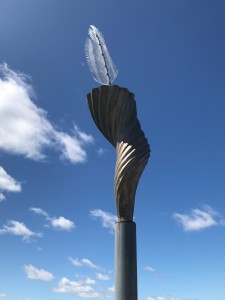 This is Future Seed by Adrian Spurr. The bronze seed of the future is sitting on a barren limestone outcrop which itself is placed upon a charred and scarified remnant of Red Flowering Eucalyptus. The aluminium sail reminded me of a country windmill. You will see Joe interrupting my video at the end! Future Seed1

I really liked this sculpture which was too hard to video. Threefold by Nicole Allen, about which the author says: The world is three; earth sea and air. Nature is threefold; mineral, vegetable and animal. And mankind is threefold; body, soul and spirit. So it deserves three photographs. 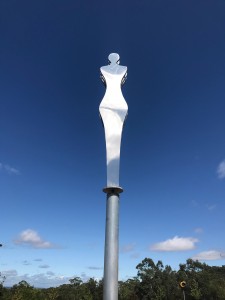 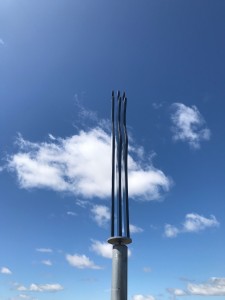 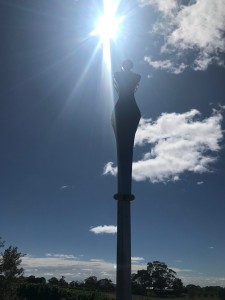 Back again to Jane and Joe, here admiring Vertices by Matt Harding who was a local sculpture from Trentham who passed away in February 2018. This sculpture was also part of the winery’s inaugural sculpture exhibition held in 2018-19. Clever, and deserving of the close attention being given. 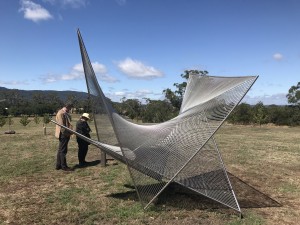 M-fortythree is by James Parrett who seeks to create sculptures that embody the power of a wave whilst respecting his ongoing practice that always examines the aesthetic potential of the circular form. I think my name for it is better. Circles

The winery is a beautiful location for an exhibition like this. I was fascinated by this tree – how old must it be? 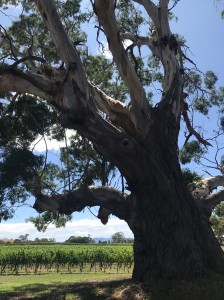 This sculpture by Dan Wollmering, Wind-stack, was close by; one of the most colourful but not the most kinetic work on display although the vent on top revolves. 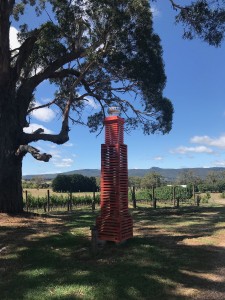 I really liked Flirt by Charilie Aquilina who says it’s having a bit of fun. The glass ball is an old Japanese fishing net float. 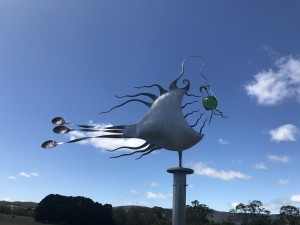 This is Anthony Vanderzweep’s Wing-it, which was actually the first sculpture in the trail, up near the wine tasting room, but we got to it last. 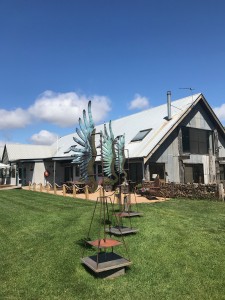 And here it is from the other direction, overlooking the vineyards. 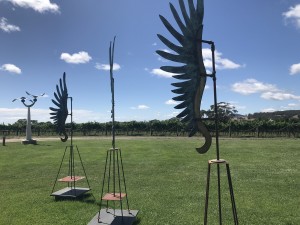 One last picture of Joe and Jane outside the winery, with one of the permanent sculptures up near the buildings. I really liked it. 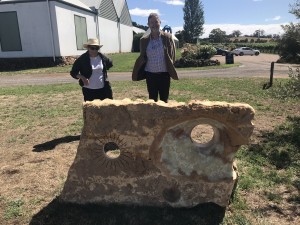 It’s not kinetic nor is its partner which looks like a fossilised shell. 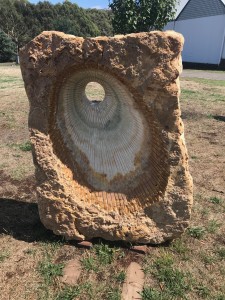 That was enough, we’d enjoyed the sculptures so now it was time to taste the wine! We bought a couple of bottles of this one which I recommend if you’re after a flavoursome white – I like these blends of different grape varieties. 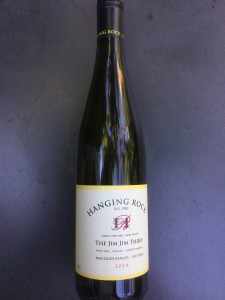